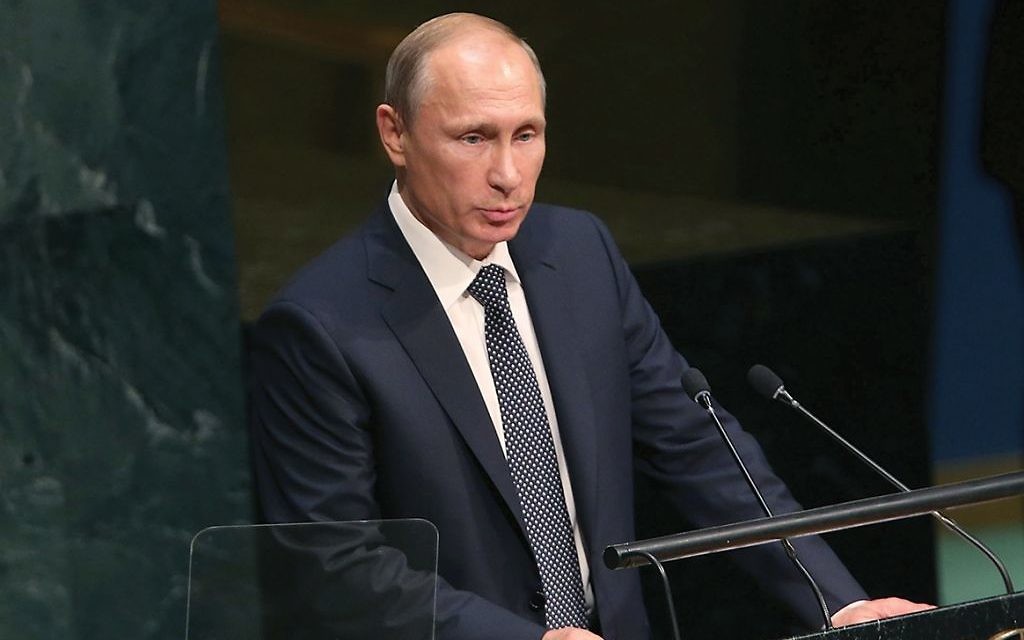 All anyone attending the United Nations General Assembly opening seemed to want to talk about was the threat posed to the world by the Islamic State in Iraq and Syria.

That was much to the consternation of Israeli Prime Minister Benjamin Netanyahu, who argued in his speech before that body last Thursday that Iran, beyond the benefits accrued to it because of the sanctions relief for nuclear restrictions deal, was benefiting from the intensified focus on ISIS.

“When your enemies fight each other, don’t strengthen either one, weaken both!” he said.

In one of the most dramatic moments of the week of speeches, Netanyahu charged the assembled world leaders with silence in the wake of Iranian provocations, including calls for Israel’s disappearance, before and after it reached the deal in July with six major powers.

He held up what he said was a 400-page tome by Iran’s supreme leader, Ayatollah Ali Khamenei, which anticipated Israel’s demise.

Netanyahu then glared, silent, his eyes moving back and forth across the chamber, for 44 seconds.

He was not precisely correct in suggesting that no other leader had called out Iran. President Barack Obama, speaking Monday, focused on Iran’s perpetuation of mischief even in the wake of the deal.

Iran “continues to deploy violent proxies to advance its interests,” Obama said. “These efforts may appear to give Iran leverage in disputes with neighbors, but they fuel sectarian conflict that endangers the entire region, and isolates Iran from the promise of trade and commerce.”

Obama called on Iran to choose a “different path.”

“Chanting ‘Death to America’ does not create jobs or make Iran more secure,” he said. “If Iran chose a different path, that would be good for the security of the region, good for the Iranian people and good for the world.”

Still, Netanyahu had reason to be concerned that the Obama administration was preparing to pivot toward a gentler accommodation of Iranian ambitions in the region, precisely because of shared interests in confronting the Sunni extremist ISIS.

Prior to the formal opening of the General Assembly, Secretary of State John Kerry met in New York with his Iranian counterpart, Javad Zarif, for the first time since the July deal was announced — and made clear that the U.S. had more to discuss with Iran than just nuclear compliance.

“We have a lot of issues to talk about,” Kerry said on his way into the meeting. “I view this week as a major opportunity for any number of countries to play an important role in trying to resolve some of the very difficult issues of the Middle East. We need to achieve peace and a way forward in Syria, in Yemen, in the region itself.”

The success of ISIS, and the wave of Europe-bound refugees it has created, preoccupied many of the speakers, chief among them Obama and Russian President Vladimir Putin, who sparred over best practice: Targeting ISIS while seeking the ouster of the Iran-backed Bashar Assad regime in Syria, as Obama counseled, or embracing Assad as a useful partner in defeating ISIS, as Putin advised.

“The United States is prepared to work with any nation, including Russia and Iran, to resolve the conflict,” Obama said.

“But we must recognize that there cannot be, after so much bloodshed, so much carnage, a return to the prewar status quo,” he said in his General Assembly address. “Let’s remember how this started: Assad reacted to peaceful protests by escalating repression and killing that, in turn, created the environment for the current strife.”

“We should all remember what our past has taught us,” Putin said. “‘Social experiments’ for export, attempts to push for changes within other countries based on ideological preferences, often led to tragic consequences and to degradation rather than progress.”

Iranian President Hassan Rouhani, speaking Tuesday, also dedicated much of his speech to the threat that he said ISIS posed.

“The gravest and most important threat to the world today is for terrorist organizations to become terrorist states, for the destiny of nations to be determined by arms and terror rather than the ballot box,” he said. “No country should be allowed to use terrorism for the purpose of intervention in the affairs of another country.”

As if anticipating Netanyahu’s direst warnings, Rouhani welcomed the nuclear deal as an entree into the international community while continuing Iran’s tradition of lobbing anti-Israel rhetorical bombs at the United Nations.

“The agreed-upon deal is not the final objective but a development which should be the basis of further agreements to come,” he said.

Rouhani warned the assembled leaders “not to allow the Zionist regime to remain the only impediment in the way of realizing this important precedent.”

Having failed to stop the nuclear deal, Netanyahu appeared to realize that his best bet is to encourage its close supervision. He made clear that keeping a close eye on Iran would be high on his agenda when he meets with Obama at the White House on Nov. 9.

“Israel deeply appreciates President Obama’s willingness to bolster our security, help Israel maintain its qualitative military edge and help Israel confront the enormous challenges we face,” he said. “Israel is grateful that this sentiment is widely shared by the American people and its representatives in Congress, by both those who supported the deal and by those who opposed it.”