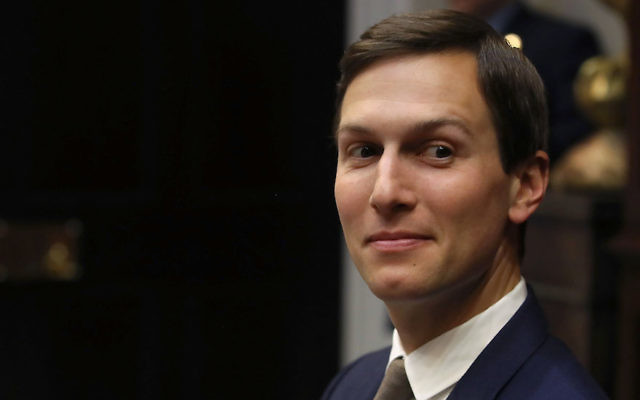 He’s been working on it for two years, but it looks as if we’re going to have to wait another couple of months before it’s unveiled. There was some buzz that presidential adviser/son-in-law Jared Kushner’s Middle East peace plan might have been at least partially unveiled at last week’s Warsaw Summit. But the setting wasn’t right for testing the waters on the plan, and the administration made a wise decision in holding off on revealing any details.

Kushner will wait until after Israel’s next election to roll out his plan. That won’t undermine Prime Minister Benjamin Netanyahu’s chances of being re-elected, but it might play a role in determining the shape of the coalition that emerges after the voters have their say.

Even if he doesn’t like the plan, Netanyahu won’t say no to his ally,  President Donald Trump. That worries the Israeli right, which fears any version of a two-state solution. But if Netanyahu appears unconcerned about what Kushner’s been cooking up, it’s not because he is enamored of a peace plan that is probably just a watered-down version of past American ideas. His equanimity is based on his firm conviction that the Palestinian Authority has no intention of negotiating seriously on the basis of this plan or any other.

And it is this fact that we should keep in mind when evaluating not only the merits of Kushner’s scheme but what, if anything, the U.S. could propose that might move the needle a little closer to peace.

Trump is criticized because his deal is not as generous to the Palestinians as previous peace offers and merely echoes Netanyahu’s ideas. Their analysis sounds reasonable since pressure on Israel to make concessions on settlements or borders would seem to be the best way to entice the Palestinians back to the table. But even if you don’t think much of Trump and his Middle East team, it’s fair to ask why that kind of pressure didn’t work when President Barack Obama was putting the screws to Netanyahu and outlining terms that were in line with Palestinian ambitions.

What the Palestinians don’t realize is that their biggest problem isn’t a plan that doesn’t give them everything they want even if it would bring them an independent state. It’s that neither the U.S. nor most of the Arab world are willing to continue buying into the assumption that solving the conflict between Israel and the Palestinians is the key to regional stability. As the conversations in Warsaw made clear, the rest of the Arab world is worried about the threat from Iran and gave short shrift to Palestinian complaints.

To note that is not to imagine that newly minted Zionists now rule nations like Saudi Arabia. But they view Israel as a strategic bulwark against Tehran and don’t see why their security should be sacrificed for the sake of a Palestinian cause that is still stuck in a 100-year-old war against Zionism that has motivated first Yasser Arafat and now Mahmoud Abbas to continually reject offers of statehood and peace. So while they won’t stop paying lip service to the Palestinians, neither will they push Trump to pressure Netanyahu when they know Abbas hasn’t the will (thanks to his fear of his Hamas rivals) to make peace. Saudi money won’t buy Palestinian acceptance of Trump’s terms any more now than in the past. So while it can be argued that the U.S. must make some effort on this front, it’s also true that the Arab world is as unenthusiastic about the creation of an unstable state that might be taken over by Hamas as anyone in Washington or Jerusalem.

That means the real problem with Kushner’s plan is not whether it is generous enough to the Palestinians but whether an initiative that smacks more of Trump’s outsize ego than common sense could get in the way of a strategic alliance to resist Iran. By choosing to re-emphasize this issue at a moment when he has no chance to succeed, Trump is repeating the mistakes of the past. Playing at the peace process table has always been a game for suckers and that is as true for Trump as it was for his predecessors. Kushner would do far better to keep his plan on the shelf than to recreate a dynamic that can only distract the region from the higher stakes contest with Tehran without doing a thing to advance the cause of peace.

Jonathan S. Tobin, whose column appears monthly, is editor in chief of JNS.org and a contributor to National Review.