The Odyssey of an Apple Thief 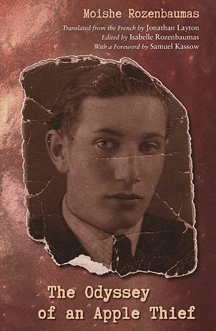 Join us for an event celebrating the release of a new English translation of The Odyssey of An Apple Thief by Moishe Rozenbaumas, translated by Jonathan Layton and edited by Isabelle Rozenbaumas. In his autobiography, Rozenbaumas takes us through his fascinating life, starting with his boyhood in pre-war Lithuania. He focuses on the most impoverished part of the Jewish population, which is rarely accounted for in the books written by survivors after the war.

Scholars Barbara Kirshenblatt-Gimblett and Sam Kassow will join Rozenbaumas in a conversation about his book. The evening will also feature readings from the book by Yuri Venedyapin and musical performances by violinist and singer Eléonore Biezunski, Yuri Venedyapin (guitar, vocals), and Ilan Moss (accordion) including songs in Yiddish, Russian, and French.

Travel accommodations and performance fees for this event were generously underwritten in memory of Max Meyerowitz.