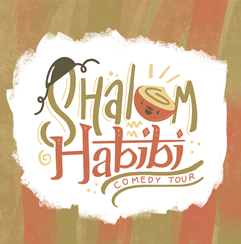 Shalom Habibi is a comedy tour featuring Jewish and Arab comedians performing at cultural centers across the US. The goal of the tour is to bridge the gap between our two communities in at least a small way. As a way to inspire meaningful conversation and hopeful unity. Following every show, stick around for a Q+A podcast recording with the comedians!