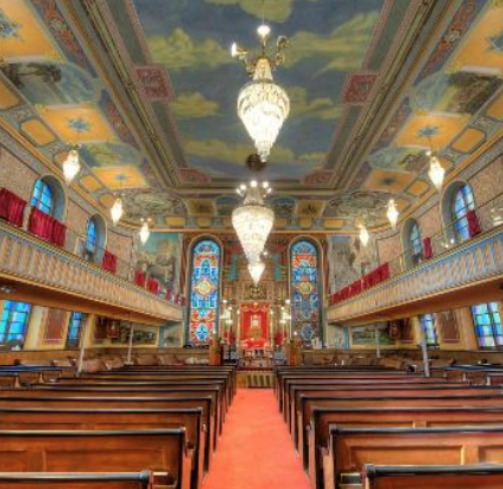 On this tour, you will visit a range of sites, from the spectacularly colorful Bialystoker Synagogue to a simple shteibl, Beth Hachasidim De Polen. See where immigrants went to shul, and how a new generation is carrying on these traditions.

Bialystoker is a magnificently renovated former Methodist church believed to be a stop on the Underground Railroad. It is a rare treasure, and one of the few synagogues surviving worldwide that has hand-painted mazoles – or signs of the zodiac – historically seen in Ashkenazic synagogues throughout the world, and is now the largest active congregation on the Lower East Side. Learn why there is a lobster painted on the ceiling.

Visit a Shteibl (one room house of prayer).

Discuss Beth Hamedrash Hagadol – once home to the first and largest Russian Jewish Orthodox congregation in the United States, as well as the only Chief Rabbi of America.

Walk the streets of Historic East Broadway. Sites to be viewed and discussed include: The Educational Alliance, Henry Street Settlement, The Forward Building, Seward Park, Straus Square and more.

Your guide has spent his entire life on the Lower East Side and will give you an insiders perspective.

A portion of the proceeds of this tour are returned to the site.

Tickets are $25PP and will be $3 additional if purchased the day of the tour.