A Forgotten Land: Growing Up in the Jewish Pale 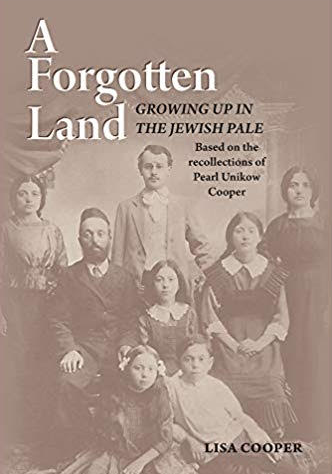 A Forgotten Land is the story of one Jewish family in the Russian Empire of the late 19th and early 20th centuries, set within the wider context of pogroms, World War I, the Russian Revolution, and civil war. Lisa Cooper is fortunate that her grandmother was a great storyteller. Lisa’s father, who grew up in Canada surrounded by his mothers tales of shtetl life, made recordings of her stories and later translated them from the Yiddish. These stories, and the book which grew from them, give us insight into the lives of our ancestors.

Lisa Cooper is a British writer, journalist and artist. Lisa studied Russian at Edinburgh University. During her year as a student in the then-Soviet Union, armed with an address dating from the 1960s and a family tree, she made contact with cousins in Kiev who introduced her to a web of relatives shed known nothing about. The experience helped breed an interest in both family history and Ukrainian Jewish history.