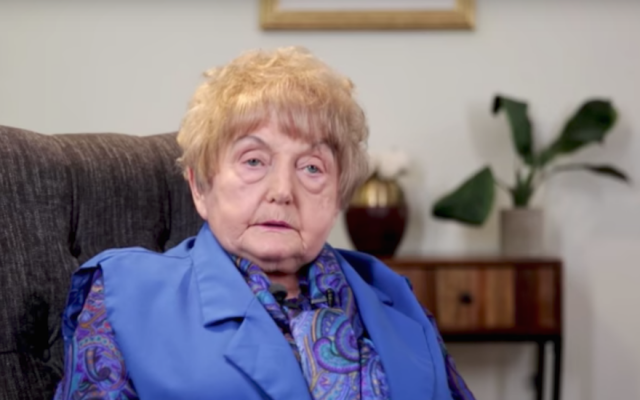 Eva Kor, who survived the twin experiments of Josef Mengele at Auschwitz, preached forgiveness. (via JTA)

(JTA) — Holocaust survivor Eva Mozes Kor, who underwent experiments in Auschwitz together with her twin sister, has died at the age of 85.

Kor, of Terra Haute, Indiana died on Thursday morning in Krakow, Poland, the CANDLES Holocaust Museum and Education Center she founded said in a statement. She was in Poland with the museum’s annual trip to visit Nazi camps.

Kor and her sister were one of some 1,500 sets of twins who were experimented on by Josef Mengele. CANDLES stands for Children of Auschwitz Nazi Deadly Lab Experiments Survivors. She founded the museum in 1985.

Kor and her twin sister Miriam, who were born in Romania, were the only members of her family to survive the Holocaust, after being sent to Auschwitz in 1944. They were liberated 18 months later by the Soviet army.

Kor moved to Israel, with her sister, in 1950 where she served in the Israeli army as a Sergeant Major in the Engineering Corps. In 1960 she married fellow survivor, an American, Michael Kor and they moved to the United States.

Her experiences during the Holocaust became public due to the 1978 miniseries “The Holocaust.”

She returned to Auschwitz to share her experience with groups during tours of the site, including annually with groups from CANDLES.

Kor frequently spoke about the power of forgiveness and publicly forgave Mengele and the Nazis. Her embrace in 2015 of 94-year-old Auschwitz guard Oskar Groening, during his trial in Germany, made headlines.

The CANDLES museum wrote in its announcement of Kor’s death: “The themes of Eva’s life are apparent. We can overcome hardship and tragedy. Forgiveness can help us to heal. And everyone has the power and responsibility to make this world a better place. We hope Eva’s story continues to change the lives of those who hear it for many years to come.”

The museum will remain closed until Tuesday to honor her.