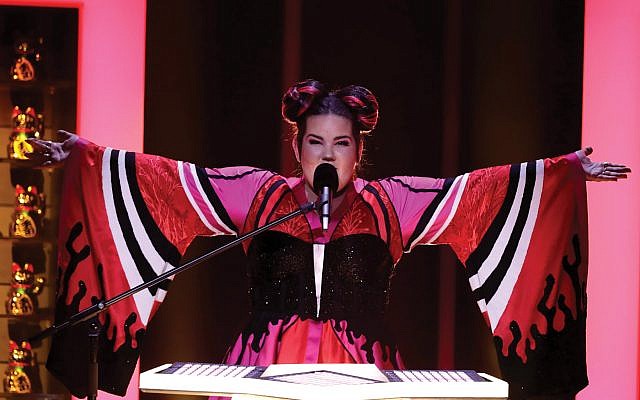 Tel Aviv — The video montage follows the path of tourists arriving in Israel for the annual Eurovision Song Contest, which is being held in Tel Aviv this year: an El Al plane touching down in Israel, a Eurovision billboard at the airport and the country’s cultural capital lit up with flags in celebration.

Suddenly, there’s an overhead image of a building whose roof has collapsed, an ominous countdown to the beginning of the Eurovision semifinal round on May 14 — a message to Israel and the world: “Israel is not Europe.” The finals are scheduled for May 18.

The blunt tool of psychological warfare was released by Gaza’s Islamic Jihad group amid the worst escalation in rocket fire into Israel since the two sides fought for five weeks in the summer of 2014. As hundreds of rockets rained down on southern Israel — killing four Israelis and forcing school closings in the region — the flare-up in violence was timed to catch Israel at a vulnerable juncture.

With Israel preparing to host a major international entertainment competition, gearing up for Independence Day celebrations and awaiting the outcome of negotiations to form Prime Minister Benjamin Netanyahu’s new government, Israeli threats of upping the ante on Hamas with a major offensive seemed unlikely to materialize.

On Monday morning, a cease-fire in the violence took effect, amid a hail of criticism on the Israeli right and left over Netanyahu’s management of the Gaza conflict.

“The cease-fire lacks any achievements for Israel, given the conditions under which the cease[-fire] was reached,” tweeted Gideon Saar, a prominent member of Netanyahu’s Likud party. “The periods of time in between the rounds of attacks on Israel and its citizens are becoming shorter, and the terror groups in Gaza are becoming stronger. The battle hasn’t been stopped, just postponed.”

A military expert explained that Hamas and Islamic Jihad recognized they could gain some leverage over a militarily superior foe, as negotiations over a long-term truce continued, that would include economic concessions for Gaza’s crumbling economy and infrastructure.

Gaza’s armed groups “are getting better at understanding the psychology of the other side. They understand that it’s not just about military power — it’s also timing. When the airport was shut in 2014, they fully understood what it meant. It’s Israel’s umbilical cord to the world.”

As Israel and Hamas seemingly teetered on the brink of a new war over the weekend, performance delegations from around Europe were arriving in Israel and starting their first Eurovision rehearsals. The violence raised the specter of an 11th-hour cancellation of the contest, along with tourists and artists fleeing Israel in fear. (Eurovision organizers said the show would go on.)

Israel has been excitedly gearing up for the song contest after singer Neta Barzilay won the competition a year ago. It’s the first time that Tel Aviv has ever hosted the competition. Several months ago, Madonna announced an agreement to perform at the contest.

Israel’s Channel 12 television quoted a Palestinian militant spokesman over the weekend sounding an explicit threat: “We will prevent the enemy from having a successful competition — that damages the Palestinian narrative.”

Israel’s Independence Day celebrations were incentives for the Netanyahu government to bring the current round of fighting to an end, said Gerald Steinberg, a professor of political science at Bar Ilan University.

“Israel did not want people to see all the people who came for the Eurovision run away because of rocket attacks,” he said, adding that this concern contributed to Israel’s decision not to push the envelope toward escalation.

Steinberg said there are still unknowns about what prompted both sides to end the round of violence so quickly. Given Israel’s vulnerability this week and next, it would have made sense for Hamas to continue to fire rockets.

He noted that Hamas was singled out for blunt criticism from the European Union, the United Nations and French President Emmanuel Macron over the rocket fire.

Across the Arab world, the escalation spurred indifference and even criticism; in the West Bank, there were few Palestinian solidarity demonstrations.

“The Palestinians have become accustomed to stirring waves with anything they do. The last round marked a record level of apathy. It was barely mentioned in news broadcasts abroad. Saudi Arabia’s media empire bashed Hamas endlessly,” said an Arab affairs analyst in an interview with the Maariv newspaper. “Ramadan is starting and Palestinians feel especially depressed. They don’t understand what transpired over the last few days.”

After the guns fell silent on Monday, Amos Yadlin, a former military intelligence chief and the director of the Institute for Strategic Studies at Tel Aviv University, wrote on Twitter that the balance sheet was mixed for Israel. The macro problem, he noted, was that Israel lacks a clear set of strategic goals regarding Gaza and Hamas.

On the negative side, Hamas succeeded in killing four Israelis and disrupting life in southern Israel; dictating the start and the end of the fighting with Israel apparently “hostage” to its demands; and further eroding Israeli deterrence —  all the while Israel greenlights money from Qatar to flow to the Gaza Strip.

On the positive side, he wrote, Israel returned to a policy of targeted killing of Hamas senior officials, adding, “it seems like after all that, it seems that Eurovision and Yom Ha’Atzmaut will be enjoyed in tranquility.”

But the next outbreak only seems like a matter of time.