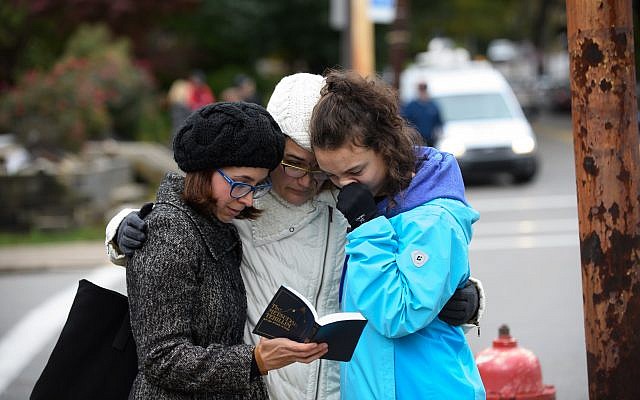 JTA — The Pittsburgh synagogue shooting should be a turning point for the security of American Jewish institutions, a former leader of Belgian Jewry said.

Joel Rubinfeld, a former president of the CCOJB umbrella group of Belgian Jewish communities and the current president of the Belgian League Against Anti-Semitism, or LBCA, spoke with JTA about the slaying of at least 11 people at Pittsburgh’s Tree of Life synagogue Saturday morning.

“In Europe, the prospect of deadly expressions of anti-Semitism is a part of life that we grow up with,” said Rubinfeld, who was present at the Grand Synagogue of Brussels when a terrorist shot four people there on Rosh Hashanah of 1982, wounding two of them seriously and the other two lightly. “I used to think this was a fundamental difference to the United States, but no more.”

The Pittsburgh shooting “will be a turning point for American Jews, who will need to reevaluate the vulnerability of their institutions” Rubinfeld said. “I think we’ll see a Europeanization of American Jewry in this respect.”

Currently, Jewish institutions are guarded by soldiers toting machine guns in Belgium and France, among other European countries, making an attack like the one in Pittsburgh “quite difficult,” Rubinfeld said.

“This attack underlines once more that in the United States as in France, anti-Semitism remains ideological poison but also a mortal danger,” a CRIF spokesperson wrote on Twitter.

Rubinfeld, 50, said that Saturday’s shooting, in which a suspect with a history of anti-Semitic statements was arrested at the scene, “inevitably threw me back to that experience” at the Brussels synagogue. “Words cannot express the horror of what happened in Pittsburgh. The hearts of the Jews of Belgium and of all of Europe are with the victims’ families and loved ones.”

In 2014, an armed assailant killed four people at the Jewish Museum of Belgium. An Islamist is standing trial for the murders.

Two years later, an attack at Brussels’ main airport killed dozens of people. It targeted Jews and Americans, according to reports. The Islamic State terrorist groups claimed responsibility for that attack.