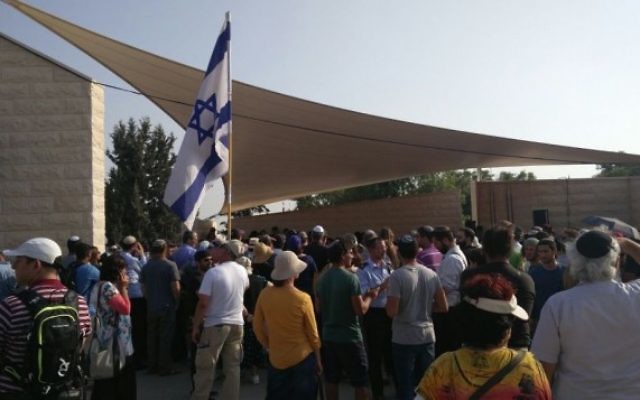 Mourners attend the funeral of Yosef Salomon, 70, and his two children Chaya, 46, and Elad Salomon, 36, who were stabbed to death in their home by 19-year-old Palestinian Omar al-Abed, July 23, 2017. (Raoul Wootliff/Times of Israel)

Sadly, we are witnessing an increase in terrorism and violence in our region. The horrific slaying of three members of the Salomon family in Halasmish on a Friday night in their home has reminded us again of the evils of terror. And, once again, our adversaries are seeking to blame others for their crimes instead of taking responsibility for their dangerous actions.  The simple truth is that the main cause of Palestinian terror, and the largest impediment to true peace, is the hateful incitement to violence and the financial incentive of terror by the Palestinian Authority.

Our first line of defense is to always stop the terrorists who seek to blow themselves up, killing and harming as many innocent people as possible.  This, however, is not enough.  While Mahmoud Abbas claims to seek peace when addressing the international community, he is actively funding, promoting, and glorifying terror.  If we wish to make a real impact in this fight against terror, then we must stop it at the source.  This means holding the Palestinian Authority (PA) he heads responsible.

In 2016 alone, the PA spent over $300 million on salaries paid to terrorists and their families — on mass murderers with innocent blood on their hands. Under Abbas’s leadership seven percent of the total PA budget went directly to funding terrorists and their families. In 2017, the PA increased its spending on salaries to terrorist prisoners by 13 percent and to families of “martyred” terrorist by four percent, bringing the total amount spent on terror funding to $355 million.

Clearly, the Palestinian Authority has no intention of stopping their funding of violence, and is in fact encouraging the perpetuation of terrorist attacks by the 2017 increase in salary pay.  Abbas himself even reiterated recently that he will not compromise on the salary of a “martyr” or prisoner.

There are too many victims of Palestinian terror.  One of them, Oran Almog, appeared recently in the UN, told his personal story, and explained the injustice of the official PA incentive of terror.

On October 4, 2003, Jews and Arabs alike had gathered, as they often do, in Haifa’s famous Maxim Restaurant. Hanadi Jaradat, a law student from Jenin and a member of the terrorist organization Islamic Jihad, disguised herself as a pregnant woman. Jaradat walked into the Maxim restaurant intent on blowing herself up and killing as many people as possible. Jaradat killed 21 innocent people, and badly injured 51 more.
Oran, who was 10 at the time, was in the restaurant on that fateful day. He lost his father, grandfather, grandmother, brother and cousin. He himself was badly burned and blinded.  This heinous terror attack caused Oran years of painful and invasive medical treatment.

Jaradat’s family has earned tens of thousands of dollars in payments for her crime. The two accomplices, Sami Jaradat and Amjad Abidi, have earned over $500,000 in total terror payments. This sum perversely continues to grow as PA law provides for increased payments based on the length of the prison sentence served by the terrorists.

This financial incentive to kill is just one of the most hideous ways in which the PA continues to raise generations of future terrorists. Another way is to glorify terrorism in public spaces. Last month, the PA inaugurated the latest of its many monuments dedicated to suicide bombers. This monument in the center of Jenin is dedicated to Khaled Nazzal, a former leader of the Democratic Front for the Liberation of Palestine (DFLP) terrorist group.  Nazzal planned the attack that led to the kidnapping and murder of 22 school children and four of their teachers in May 1974.

There are, unfortunately, too many examples of this culture of hate fostered by the Palestinians.  Children performing in school plays are told to stage the mock execution of a young Israeli soldier. In Palestinian classrooms fourth-graders solve word problems to calculate the number of “martyrs” killed while carrying out attacks against Jews. If children are surrounded by the praising of terror in and out of school they are more likely to kill.

The PA on its own would not be able to continue with this hateful charade.  These terror schemes can only exist due to the generous donations of other countries. Almost 30 percent of foreign aid provided by the international community goes to supporting terror.  This money, which was meant to support the wellbeing of Palestinians, instead is used to sponsor blood money.

The UN Security Council, which was founded to ensure “the maintenance of international peace and security for all,” has a special role to play in ending this reprehensible Palestinian practice.  The members of the Security Council and the entire international community must make clear to the PA that they will no longer allow it to continue these payments.

Oran Almog overcame unthinkable horrors and today inspires young people around the world. Like Oran and all Israelis, the international community must value life over death. The blind acceptance of murder cannot go on. This silence in the face of terror must end.

Danny Danon is Israel’s Ambassador to the United Nation.