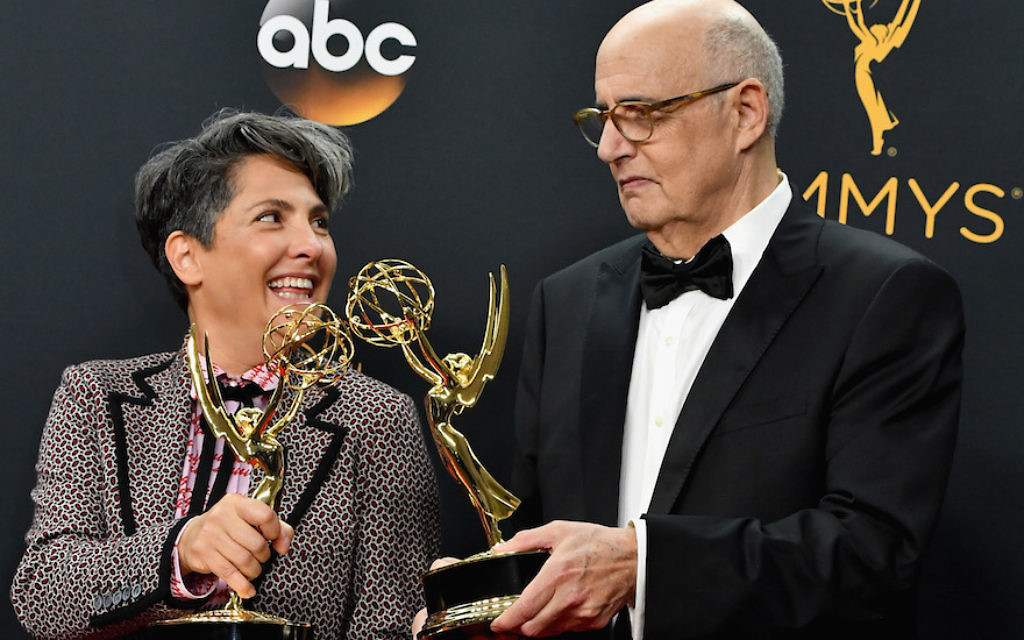 Put enough Jewish talent and Hollywood brass in a room and you’re bound to create some memorable Jewish sound bites — and the 2016 Emmy Awards on Sunday night were no exception to this rule. From a shout-out to New York Jews to a tribute to late Jewish stars, here are the Jewiest moments from TV’s biggest night.

In accepting his speech for best actor in a comedy series (for his role as a transgender woman in Jill Soloway’s “Transparent”), Tambor spoke about some of the social issues the groundbreaking show tackles. When the band began to play (signaling that his time was up) Tambor said “sheket bevakasha” — meaning “quiet please!” in Hebrew — so that he could say that transgender actors should be given more jobs in Hollywood.

It might not be so surprising that David Mandel, an executive producer of “Veep,” dedicated the satirical show’s win for best comedy series to “chubby Jews from the Upper West Side or wherever you are.” Mandel was formerly a producer of Larry David’s “Curb Your Enthusiasm” and was a writer during some of the late seasons of “Seinfeld.”

‘Game of Thrones’ creators cleaned up

The “Game of Thrones” books may be written by George R.R. Martin, but the massively successful HBO series based on the fantasy novels is spearheaded by a pair of Jews: David Benioff and Daniel “D.B.” Weiss. The pair helped make history on Sunday, as the lauded series overtook “Frasier” for the most wins in Emmys history (38). Benioff mentioned his wife Amanda Peet — who wrote a children’s book last year about a Jewish girl who feels left out on Christmas — twice in an acceptance speech.

Some legends were honored

Gene Wilder (“Willy Wonka & the Chocolate Factory,” “Young Frankenstein”), Anton Yelchin (“Star Trek”), Abe Vigoda (known for his roles in “Barney Miller” and “The Godfather”) and Fyvush Finkel (a star of the Yiddish theater world and winner of a 1994 Emmy for his role in “Picket Fences”) were all mentioned in the show’s poignant “In Memoriam” segment.

A Jewish-Danish director has her day

Susanne Bier is best known for her Danish feature films, which have garnered Academy Award nominations (“In a Better World”) and spawned American remakes (“Brothers”). But on Sunday she won an Emmy for best directing for a limited series for her work on “The Night Manager,” an AMC miniseries. Bier has an interesting Jewish backstory — her father fled Germany for Denmark in 1933, where he met her mother. When Nazis began rounding up Jews there, her parents fled to Sweden in a boat. She has said her Jewish upbringing instilled in her a strong sense of family.