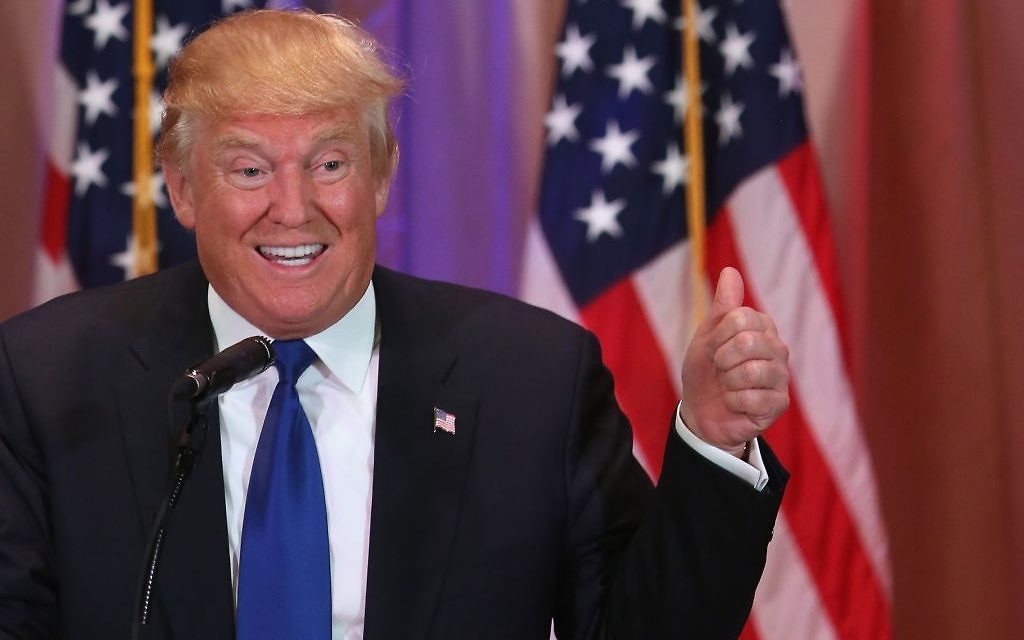 As both Democrat Hillary Clinton and Republican Donald Trump emerged as their party’s likely presidential nominees given their impressive Super Tuesday primary victories, anti-Semitism has suddenly surfaced as an issue.

Nation of Islam leader Louis Farrakhan praised Trump this week for being the “only member who has stood in front of the Jewish community and said, ‘I don’t want your money.’”

He stopped short of endorsing Trump but added, “I like what I’m looking at.”

His comments came after David Duke, a former Ku Klux Klan Imperial Wizard, and Jean-Marie Le Pen, founder of France’s far-right National Front party who has described the Nazi gas chambers as a “detail of history,” both endorsed Trump.

“If I were an adviser to the Trump campaign, I would tell him to immediately go before the cameras and repudiate David Duke, Farrakhan and Le Pen,” said Rabbi Marvin Hier, founder and dean of the Simon Wiesenthal Center. “When the anti-Semites are circling the wagons, if I were Trump I would say I don’t need their support and don’t want it.”

Trump did so well in election returns Tuesday night because the majority of voters told exit pollsters that they wanted to see an “outsider” in the White House.

Thus, 72 percent of voters in Massachusetts said they voted for Trump because they wanted an outsider while Texas Sen. Ted Cruz and Ohio Gov. John Kasich both got only 8 percent of the “outsider” vote.

On the Democratic side, Clinton won in Alabama, Arkansas, Georgia, Massachusetts, Tennessee, Texas and Virginia. Sen. Bernie Sanders defeated Clinton in Colorado, Minnesota, Oklahoma and his home state of Vermont.

Among Jews, racism has already become an issue in the campaign as a result of Trump’s comments critical of Mexicans and Muslims. Other areas of particular importance to the Jewish community include Israel and the conflict in the Middle East, immigration, health care, education and gun control.

“I’m troubled that Donald Trump does not understand the issues that concern our community,” said Seymour Reich, a former chairman of the Conference of Presidents of Major American Jewish Organizations. “Whether it is David Duke or the Ku Klux Klan or even Israel, he is ambivalent. It is not clear to me that he has thought these things through. His position changes from day to day and it’s troubling.”

He was referring to the fact that last Friday Trump repudiated Duke, but when asked by CNN on Sunday whether he would disavow Duke and other white supremacist groups that are supporting his campaign, he replied: “I know nothing about David Duke; I know nothing about white supremacists.” Later, he again repudiated Duke on Twitter and in television interviews.

In response to Trump's equivocal reply, the Anti-Defamation League sent to all of the presidential candidates information about Duke, other extremists and hate groups.

“The last thing we want is for white supremacists to use this campaign to mainstream their bigotry,” said Jonathan Greenblatt, ADL’s CEO. “It is imperative for elected leaders and political candidates like Mr. Trump and others in the public eye to disavow haters such as Duke and the other white supremacists who have endorsed his candidacy. By not disavowing their racism and hatred, Trump gives them and their views a degree of legitimacy.”

Reich said he has a “sense that he [Trump] just shoots from the hip too frequently and that he just doesn’t know the issues. He rambles. He does not use a text. He’s like a loose canon. … The Jewish community needs stability in the White House and sadly, regrettably, Trump does not offer that.”

But there are some conservative Jewish Republicans who are prepared to hold their nose and vote for Trump to keep Clinton from winning the presidency.

“As boorish as he is, as occasionally foolish as he is, and how vituperative he can be, I would vote for Donald Trump over Hillary Clinton any day,” Ari Fleischer, a former spokesman for President George W. Bush and a board member of the Republican Jewish Coalition, told JTA.
And Fred Zeidman, a major Republican donor who had backed Jeb Bush’s failed candidacy, suggested to JTA that he was prepared to vote for Trump if most Republicans prefer him. “The fact of the matter is we have to go on to defeat the Democratic candidate.”

The Jewish Week has spoken with Jewish Republicans in New York and Florida who say their friends are telling them privately — and sometimes openly — that they plan to vote for Trump. One said his friends don’t want others to know of their support for the New York businessman because to date he has run a campaign of little substance that is largely filled with bravado, slogans and promises “to make America great again.”

But the recent flare-up of the racism and anti-Semitism could complicate things for Jewish Trump supporters.

Among the reasons Trump is turning off Jewish voters is that he is “a vulgarian, coarse, unrefined and [most] Jews have never liked populism of the left or right,” said Bill Schneider, a former CNN political analyst and now a professor of policy, government and international affairs at George Mason University. “They like sophisticated, refined, tolerant candidates.”

Jewish support for Democratic presidential candidates reached a whopping 90 percent when they voted for both Franklin D. Roosevelt and Lyndon B. Johnson. It has slipped in recent years, dropping to 69 percent in the 2012 election. But should Clinton prove to be her party’s candidate, Jewish support could soar to 90 percent in a contest against Donald Trump, suggested Peter Beinart, a contributing editor at The Atlantic and the National Journal.

“My guess is that Trump will win less than 20 percent — maybe 15 or even 10 percent” of the Jewish vote,” he said. “She will win in a blowout against Trump. He plays poorly against [the majority of] Jews, despite being the grand marshal of the Israel Day Parade. … Most Jews are still attached to the Democratic Party and need something unusual to pull them away. Trump does just the opposite – he will not even get those who naturally go for the Republican.”

Beinart added that Trump’s equivocation on Duke “absolutely hurts him among Jews — and in general.”

When it comes to Israel, an election campaign is typically the season to be very pro-Israel, but Trump’s “neutral” stance has left some Israel supporters puzzled, according to Aaron David Miller, a vice president at the Woodrow Wilson Center for Scholars.

“Trump is pursuing a policy that is less rhetorical and more detached so he can be a mediator” of the Israel-Palestinian conflict, he said. “He was booed at the Republican Jewish Coalition when he refused to say he would move the American Embassy to Jerusalem. He keeps talking about what an honor it would be to get involved to broker a solution.”

But Steven Spiegel questioned how Trump could be “both positive on Israel and neutral.”

Spiegel, a professor of political science at UCLA and national scholar of the Israel Policy Forum (a group promoting a two-state solution to the Israel-Palestinian conflict), asked, “What does neutrality mean? He says, ‘Trust me, I’m such a great deal maker I can make negotiations work.’ He has also said that if he is elected, there will be a certain amount of surprise. What does that mean about Israel?

“Trump says Germany, Japan, South Korea and other countries must pay more for the American troops based in their countries. What happens to [joint military exercises with] Israel? Does he see Israel as a special case? On Hillary, everyone knows where she stands. She talks of keeping America’s unshakeable commitment to Israel’s security, its military edge, missile defense and intelligence sharing. She talks of selling Israel the most sophisticated fighter aircraft and that she will push tunnel technology detection. So we’re comparing someone who speaks in broad strokes and about maintaining neutrality with someone who supports Israel and has pressured Israel in the same way other [American leaders] have.”

Miller said he has “never seen a candidate like [Trump]. Based on the statements he has made, there is very little to go on except for slogans. He has not said he is going to shred the agreement on Iran’s nuclear program,” but has been harshly critical of it and of the $150 billion Iran will get that Trump said Iran would use for terrorist activities in much of the world.

“He will have to define himself even more before the [November] election,” he said.

On the other hand, Miller noted, Clinton’s “sensitivities are more pro-Israel, but at the same time she has made comments critical of Israeli settlements and Israeli policy regarding the West Bank. … She would be more predictable as president regarding the Middle East. How much priority she would give to Israel [as president] is unknown.”

Regarding Iran, Clinton said she strongly backs the nuclear agreement.

Foreign policy has received little attention in the campaign to date, something Malcolm Hoenlein, executive vice chairman of the Conference of Presidents, said he would like to see change.

“Sixty-percent of Americans oppose the Iran agreement and the Jewish community is opposed to it,” he said. “Even more Americans are skeptical about Iran with its missile launches, continued support for terrorism … and continued demonstrations chanting death to America and death to Israel.”

“I hope Iran does not become a political football and that the focus can be on Iranian compliance with the agreement,” Hoenlein said.

Spiegel, the UCLA professor, said Trump has business investments in several Arab countries but that he does not know if he has any in Israel.

“You could say this may cause him to have more influence with the Arab countries,” he said. “On the other hand, it may make him more interested in pressuring Israel.”