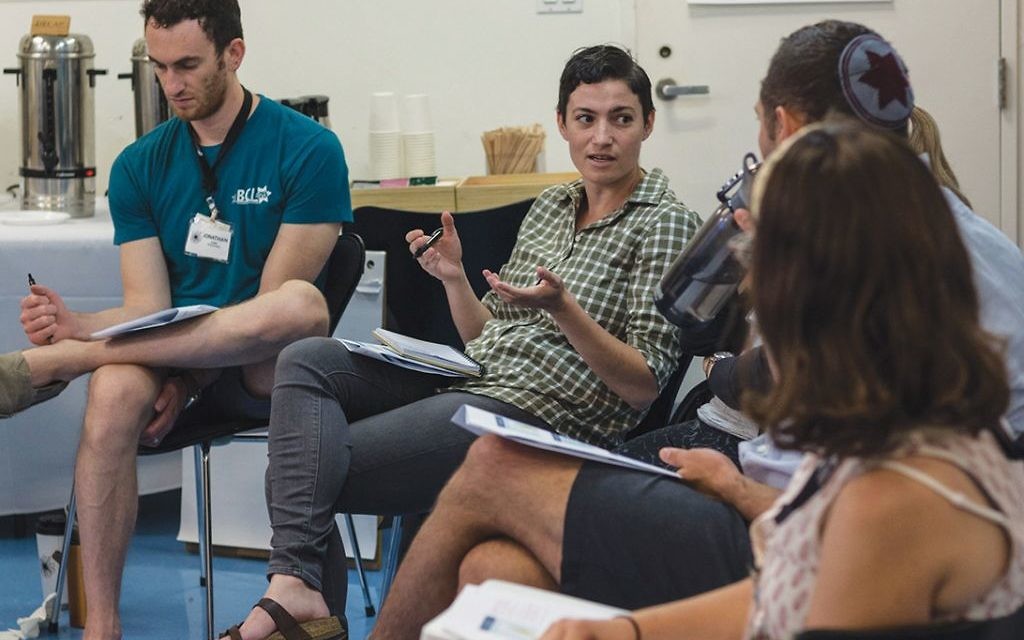 Two months after beginning a rabbinic fellowship sponsored by the Jewish Emergent Network, a collaboration between seven unconventional communities around the country rethinking Jewish engagement, Rabbi Kerry Chaplin found herself swaying arm in arm with hundreds of others at a Havdalah ceremony at the Lincoln Memorial.

It was the weekend after the election results and the seven newly instated rabbinic fellows were in Washington, D.C., for one of the fellowship’s seven retreats. Though the Havdalah ceremony had been planned in advance, the unexpected victory of Donald Trump left many seeking support and solace, and the turnout far exceeded expectations. The seven fellows, all of whom had begun the two-year fellowship just weeks before, used the ritual to symbolize the importance of unity and inclusion — the braided candle represented the joining together of communities, said Chaplin.

“This was the first ritual we, the fellows, created together,” said Rabbi Chaplin, the rabbinic fellow at Lab/Shul, an experimental Jewish community in Lower Manhattan. “It gave me a taste of what the possibilities might be.”

The Jewish Emergent Network, a project kickstarted in January by a $3.2 million grant from the Jim Joseph Foundation, is intended to boost community engagement amid declining synagogue attendance, particularly among young people. (A 2012 report from the SK3 Synagogue Studies Institute found that synagogue membership outside the Orthodox community is steadily decreasing, especially among young adults aged 18 to 34.) The election season, with all the emotions it brought to the surface, put the “strength of the network to the test,” said Rabbi Noa Kushner of The Kitchen, a religious start-up in San Francisco and a member of the Network.

“We’re building the network for moments like these,” she said, referring to the election aftermath as a “national awakening.” The seven network rabbis convened for a phone call in the days following the election to brainstorm strategies and action plans to put into place in their communities, including ad-hoc prayer sessions and support groups. “In these moments, it’s invaluable to hear from the people you most respect,” said Rabbi Kushner. “It is a source of strength to hear other rabbinic voices wrestling with this moment.”

The network provides a “spiritual vocabulary” for trying times, she said. “How does an event like this become a voice of conscience? How can we put this to the streets?” she said. “If we’re just doing rituals to make ourselves feel good, that would be yoga. And there’s already enough yoga in San Francisco.”

Moments like the election aftermath highlight how the network can provide a religious home for those seeking a more “relevant” Judaism, said Chaplin. Her former experience as the director of Jewish life at Vassar College in Poughkeepsie schooled her in “radical inclusion,” an approach that now inspires her outreach efforts at Lab/Shul.

“Whatever you are bringing with you, you can also ‘do’ Jewish,” said Rabbi Chaplin, who described her own feelings of alienation from Judaism growing up. “Learning, ritual, justice work — you can do all of that in a Jewish context. You don’t have to leave pieces of yourself at the door — that’s something I think the rest of us can learn from college students right now.”

According to Rabbi David Ingber, the rabbi of Romemu, a fast-growing Upper West Side synagogue, the network and its fellows are creating “synagogues of the future.”

“The network is a natural outgrowth of a group of innovative rabbis seeking fresh approaches to an ancient tradition, rabbis who have their own vision,” he told The Jewish Week via email.

The rabbinic fellowship, he added in a telephone interview, is the network’s first “foray into making [a] real impact.”

“What makes religion dynamic? What are best practices that can be emulated? We’re in the era of start-ups — that’s our zeitgeist.”

Though the network and its rabbinic fellows do not specifically target millennials, that generation, defined as those who came of age around the year 2000, has high numbers within the network as a natural result of the network members’ drive for authenticity, said Rabbi Ingber.

“We don’t buy into the identity hysteria,” said Rabbi Ingber, referring to the widely held notion that Jewish millennials are increasingly distant from Jewish institutional life. “We’re not going to panic that we’re losing millennials left and right. What we will do is create a rich, vibrant, dynamic, spiritually vast space that will reach Jews of all ages.”

The “Young Tisch” program at Romemu, which is tailored specifically for those in their 20s and 30s, has been successful at reaching younger Jews, he noted.

Though The Kitchen similarly targets Jews of all ages, their new rabbinic fellow, Rabbi Jonathan Bubis, himself a millennial, “goes places I won’t go” to seek out new faces, said Rabbi Kushner. “He has a musical background, so he’ll go to bars and concerts to recruit,” she said.

The ball now rests with the Jewish communal establishment, which has the ability to bring these groups more firmly into the fold, she said. “Are these Jewish generations going to have a seat at the table or will they fade off into the ether?” she asked.

“First, we need to bring them to the table. Then they need to build their own table and sit in their own chairs. We have to create spaces for [young Jews] to be a part of the conversation.”

Rabbi Amichai Lau-Lavie, the founding spiritual leader at Lab/Shul NYC, the other New York-based institution in the network, described his congregation as the “cutting edge of what congregations/ritual life can look like in this post-ethnic digital age.”

“Many of all ages join us because we are coming from a ‘both/and’ approach and not ‘either/or,’” he wrote to the Jewish Week in an email.

“Post-binary means we welcome all and experiment with our rituals, liturgy, methods and models of community building to make sure everyone feels and is welcome.”

Rabbi Josh Buchin, 33, the rabbinic fellow at Romemu, described what he and his congregants are seeking as “holy chutzpah.”

“We are looking for something authentic,” he told The Jewish Week in a phone interview.

Raised in a traditional home in Berkeley, Calif., Buchin and his family broke from the Orthodox fold after his mother was denied the chance to properly say Kaddish at a local Orthodox shul. The experience impressed upon him the importance of creating “innovative and open-minded settings for religious practice.”

“All the members of the network saw a lack and tried to fill it,” said Rabbi Buchin, who would like to one day create a similar congregation or community. “We are here to remedy a spiritual fix.”

Contrary to the perception that young Jews are disengaged, Rabbi Buchin said he believes his generation of Jews are “thirsting for Jewish identity, community and meaning.” The retreat in Washington, D.C., after the election, culminating in the heavily attended Havdalah service at the Lincoln Memorial, drove the point home.

“All weekend, the services were packed,” he said. “People needed to come that week. They needed a generous and honest spiritual connection — one that does not exclude but includes. One that is loving, non-judgmental and able to hold people when the ground beneath us starts to shake.”