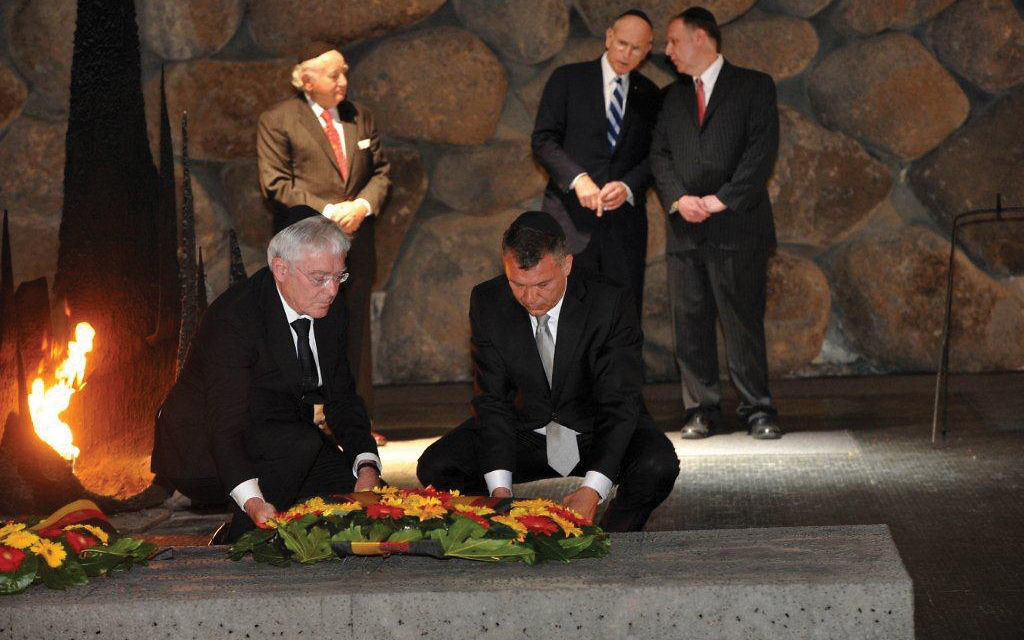 Amid an internal probe into how the Claims Conference reacted to a tip about fraud within its organization, the German government has negotiated a deal with the group to provide $1 billion over four years in home care for 56,000 elderly Holocaust survivors.

The agreement, hammered out in a five-hour negotiation last week in Jerusalem, is the largest amount agreed to for home care by the German government. Until now, budget constraints have meant that most home care recipients did not receive the amount needed. This agreement is designed to rectify that by January 2015.

There are another 90,000 survivors who receive other welfare services from the Claims Conference such as food, medicine and socialization programs. Many of them are expected to need home care in coming years, and the Germans suggested they would consider increasing their funding depending on need, according to Greg Schneider, executive vice president of the Claims Conference.

During the talks, the Germans also agreed for the first time to address the plight of survivors who were children during the Holocaust. The two sides are to meet for negotiations again next year in Berlin, and the German negotiators said they were “committed to a sympathetic approach” towards child survivors, according to Stuart Eizenstat, the lead negotiator.

“We have been advocating for many years for child survivors and we have now made it a major priority,” he said. “Child survivors had unique psychological pain from being orphaned and seeing parents murdered. We pressed very hard for this and knew it would be difficult because of the huge increase [this year] in home care” funding.

Eizenstat noted that the World Federation of Jewish Child Survivors of the Holocaust — which is a member of the Claims Conference — is planning a major conference in Berlin in August 2014 that the president of Germany is slated to host. He said it has not been decided whether the negotiations with Germany would be held before or after the conference. Until then, Eizenstat said the Claims Conference would be working with child survivors to document their needs.

“Between now and then we have to determine the number of people affected and the type of benefits they need,” he said. “We have to define the age of the child survivors we are talking about and the circumstances under which they became survivors. A lot of data has already been compiled by some of the survivor organizations, so we are not starting from scratch.”

Children survived the Holocaust in ghettos, in camps, in hiding or by fleeing.

Last week’s negotiations, conducted in a room at Yad Vashem, Israel’s Holocaust memorial and museum, followed a two-and-a-half-hour tour of the museum conducted in German. In those negotiations, the Germans agreed also to increase the income eligibility for Article 2 pensions, which had been $16,000 and will now be $25,000 starting July 1. The move makes pensions available to another approximately 1,000 Jews. And the Germans also agreed to pay Article 2 pensions beginning in January to Jews who were confined in open ghettos as opposed to walled ones like the Warsaw Ghetto.

“They were mostly in Romania and Bulgaria, and the Jews there lived under a curfew, had been fired from their jobs, were required to wear a yellow Star of David and had limited food rations,” Eizenstat said. “Today they number about 2,000 or 3,000 and they live primarily in Eastern Europe.”

He said last week’s agreement comes in the wake of the successful prosecution of all 31 people arrested and convicted in the $57.3 million fraud perpetrated against the Claims Conference. No survivors’ money was lost in the scam, which involved Claims Conference employees fabricating claims that were paid by the German government over the course of some 15 years.

Eizenstat said the German government had been “informed of the fraud for years and insisted on additional auditing when the revelations first broke. The fact that the trial is now over [for the three defendants who pleaded not guilty] and that they have been found guilty was satisfying to them. It shows that the justice system here works.”

The Claims Conference board of directors is slated to begin its own investigation next week to determine what its leadership did after receiving an anonymous letter in 2001 alleging that fraudulent claims were being approved. The letter included the file numbers of five claims reputed to be false and offered ways to verify the fraud — in one case suggesting the Claims Conference check with the Red Cross to see the original of a document that had been doctored to justify a claim.

That apparently was not done. Also not heeded were the recommendations of a paralegal in the office of Julius Berman, who in 2001 was legal counsel to the Claims Conference. The recommendation was that the actions of Semen Domnitser, who headed the processing of claims for Article 2 pensions and the Hardship Fund, be further investigated. Domnitser was convicted earlier this month of being the ringleader of the fraud.

Berman said the paralegal was not asked by him to investigate the letter writer’s claims, but rather only to speak with Domnitser to understand how the office functioned and to review the allegedly fraudulent claims. The paralegal recommended a further investigation but did not suggest that Domnitser was corrupt.

“Karl Brozik subsequently indicated to me that no further action regarding the New York staff was required concerning the issues in the report,” Taylor wrote.

In an e-mail, Reuven Merhav, the chairman of the executive of the Claims Conference who is heading the organization’s own probe, declined to comment on the investigation saying it would be “inappropriate … before we have started working.”

The fact that the Germans negotiated this new agreement with the Claims Conference, Eizenstat said, “indicates to me their continued trust over six decades of dealing with the Claims Conference, and their determination to do justice until the last survivor departs from the earth. Very few governments come to terms with their past. We’re dealing here with second- and third-generation [German leaders].”

Schneider, the Claims Conference’s current top official, noted that before last week’s negotiations, the seven-member German negotiating team headed by the deputy finance minister visited about 20 survivors in their homes and in day care centers and soup kitchens.

“There is a difference between sitting in a conference room discussing the cost per hour of home care — cold figures and the exchange rate — and actually sitting beside a woman who escaped death in a concentration camp,” he said.

The woman, who was seated in a chair at a day care center in B’nai B’rak, told the delegation that ahead of her on the selection line was a set of twins. One was sent to the right — which turned out to be the gas chamber — and the other to the left, for work. The woman said she was next in line and was ordered to the right.

Another survivor at the day care center told of being in a labor battalion in Hungary and getting a pass to visit his family. He returned home just as the Nazis were rounding up Jews in the village for deportation to Auschwitz.

“He tried to go back to his battalion, but the Nazis laughed at him,” Schneider said. “When he showed a Nazi his work papers, the Nazi ripped it up, hit him with the butt of his rifle and pushed him into a cattle car. He said that everyone of his relatives from that town was killed at Auschwitz.”

“After the survivors told their stories, the Germans embraced them,” Schneider added.