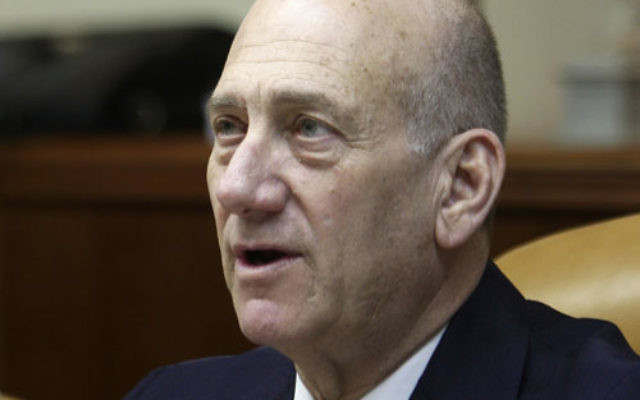 Olmert experienced chest pains and felt ill. After being examined by a prison doctor, he was transferred to Tel Hashomer Hospital near Tel Aviv.

On Sunday, Olmert appeared before the Israel Prison Services parole board requesting an early release after serving two-thirds of his sentence. The board is scheduled to announce its decision next week.

Olmert is currently under investigation for the possible leak of classified information after an autobiography he has been writing in prison was found to touch on sensitive security issues. Last month, one of his attorneys was caught with a chapter that discussed a top secret security-related incident that the military censor has banned in the past for publication.

The first Israeli prime minister to serve time in prison and be sentenced to jail, Olmert resigned his post in September 2008 after police investigators recommended that he be indicted in multiple corruption scandals.

He was convicted of receiving bribes in the Holyland affair in what has been called the largest corruption scandal in Israel. Holyland involved the payment of bribes to government officials by the developers of a luxury high-rise apartment complex in Jerusalem.

Olmert also was convicted of accepting cash-filled envelopes from an American-Jewish businessman, Morris Talansky, and using it for personal and not political expenses.