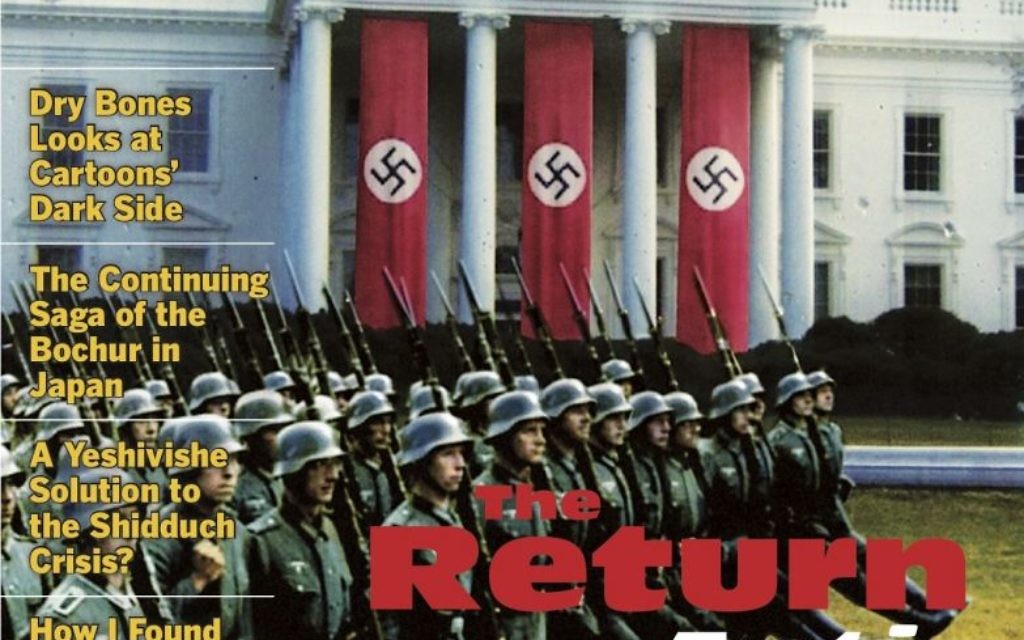 The editor of Ami Magazine acknowledged today that the front page of this week’s issue depicting the White House draped in Nazi flags with Nazi storm troopers marching in front “may have been a poor choice.”

“The swastika is the present day symbol of Nazism and we did it to make a journalistic statement about the spread of neo-Nazism,” explained Rabbi Yitzchak Frankfurter, the magazine’s publisher and editor-in-chief. “The White House was used as a symbol of the U.S. and not to suggest anything about the present administration or its occupants.”

The magazine, which is not affiliated with any organization, is published each Wednesday in New York and Israel. It is aimed at the cross spectrum of Orthodox Jews ranging from the modern Orthodox to the heredi or fervently Orthodox.

Although this week’s cover generated some complaints “I would not call it a storm,” Rabbi Frankfurter said.

“We’ve had storms in the past about editorial positions we took or articles we ran,” he said. “We had people ask us this week about our choice [of cover illustration], but I wouldn’t say there was an uproar. … Some people said they felt it was a poor choice, and in retrospect we think it may have been.”

Rabbi Avi Shafran, director of public affairs for Agudath Israel of America and a regular contributor to the magazine, said in an email that he was “taken aback” by the cover.

“The intent, of course, was not in any way referring to [President Barack] Obama but to a nightmare future scenario of American neo-Nazis taking over,” he wrote. “Still and all, the image itself was offensive. I told the editors so, and they agree it was a bad judgment.”

Rabbi Frankfurter said this was a particularly “sensitive” time to have run the illustration so soon after the recent street demonstration in Jerusalem by 1,500 fervently Orthodox Jews, some of whom wore yellow Stars of David on their jackets with the word “Jude” in the center. And some children in the protest wore striped black-and-white uniforms associated with Nazi concentration camps. One child raised his hands in surrender, mimicking the iconic photo of a Jewish boy in the Warsaw ghetto. They were protesting what they said was a nationwide campaign against their belief in the strict separation of the sexes.

Yad Vashem, the Holocaust memorial in Israel, called the use of Nazi imagery during the protest “disgraceful.”

“Because of the uproar in Israel over the use of the Jewish star, we may have made a poor choice and we regret putting that in this week’s issue,” Rabbi Frankfurter said.

He pointed out that his magazine “condemned” the Nazi imagery used in the street protest in “very strong” terms.

“We unequivocally condemned the abuse of the Holocaust memories. Now people may make the equation that we are doing the same thing. But if you look at any neo-Nazi Website, you will see that the swastika is their symbol – it is still being used and people are associating it with neo-Nazism.”

Asked if the magazine is going to say anything in next week’s issue about the cover illustration, Rabbi Frankfurter replied: “We may apologize. We don’t want people to think this was an abuse of the Holocaust memory. If anyone would think that, we want to correct that mistake and apologize to people who were offended.”

Rabbi Shafran said he does not see “any comparison between using concentration camp garb to accuse parts of Israel society of anti-heredi animus (real as that animus, unfortunately, is) and seeking to illustrate an article about the growth of actual neo-Nazis in America with the photo at issue.”

In the article, author John Loftus wrote that anti-Semitism has been increasing in the U.S. for the last 30 years and “by leaps and bounds around the world.” He said he has detected an “all too-common tendency of government and social organizations to sweep anti-Semitic or terrorist incidents under the rug. The FBI has been frequently accused in the press of deliberately mislabeling attempted terrorist attacks to improve their statistics. My friends inside the Bureau blushingly admit that the accusation has merit.”

“There is a similar inclination in law enforcement to label attacks on Jews and their property as ordinary criminal mischief rather than anti-Semitic incidents,” Loftus wrote. “Spray painting a swastika on a synagogue is only vandalism. You have to carve a swastika onto a Jewish face before the police will concede that the knife attack may possibly have had an anti-Semitic component.”

Abraham Foxman, national director of the Anti-Defamation League, told The Jewish Week that that the problem of anti-Semitism is “serious enough not to have to exaggerate.” He said that although it has increased worldwide, it has declined in the U.S. over the last 30 to 40 years.

“That is not to say that America is immune from anti-Semitism, but certainly the White House or America is not overrun by Nazis and neo-Nazis,” Foxman added. “There may be an increase in anti-Semitism, but comparing America to Germany – it will never reach that situation. Both the drawing and article are an exaggeration.”