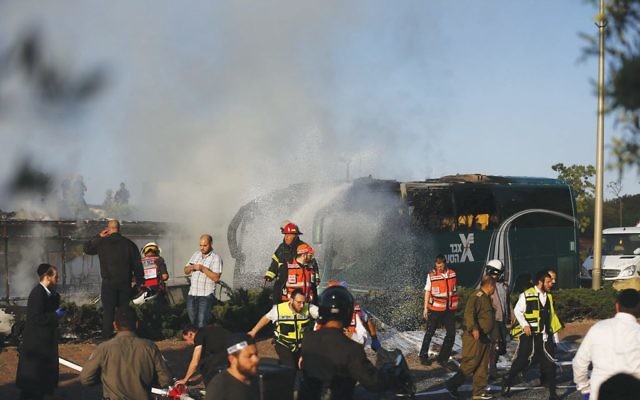 Bringing a fresh echo of the second intifada to Jerusalem, a bomb tore through a bus on Monday, injuring more than 20 passengers.

Four people were still in serious-to-moderate condition as of Tuesday afternoon, while several others were still hospitalized. And in Jerusalem, which hasn’t seen a bus bomb since 2004, people are looking over their shoulders.

The images and the reports from the scene shocked people with an all-too-familiar sense of shock. Glass shattered and flew around the bus. There were piercing screams of horror as people realized what was happening.

The bus driver, Moshe Levy, told an Israel news site: “I saw lots of people bleeding and screaming.” The suspected terrorist had boarded and paid like everybody else and didn’t look suspicious or carry and strange luggage, Levy said.

“Sadly, this attack has taken me back to the sights and sounds of the second intifada and to the terrible scenes of injured on buses,” said Shimi Grossman, a paramedic with the ZAKA rescue organization, who rushed to the scene.

The attack came as residents were starting to relax, relieved that the Shin Bet has concluded that the so-called “stabbing intifada” of lone-wolf militants seemed to be easing off. A senior member of the Shin Bet told the cabinet last week that anti-terror methods are working. He said that forces are succeeding in foiling terror operations, deterring potential attackers and calming Palestinian incitement, and confirmed a “considerable decline” in attacks over recent weeks.

But nobody knows what kind of escalation of terror from the organized militant groups may result from this attack, and what Israel’s response might be. And given the role of a deterrence doctrine, there will be an Israeli response. “We will pursue and we will reach all those who wish us harm, until quiet is assured,” said Israeli President Reuven Rivlin.

Eyal Zisser, a terrorism expert and professor at Tel Aviv University, said that there is no way of telling whether this attack is a sign of things to come, or a one-off success for terrorists. “It’s too early to say. All we know is that clearly in previous events the army was successful in preventing them, but this time it wasn’t.” Prevention, he noted, will never be 100 percent effective.

He said that talk of knife and shooting attacks drying up may still be valid despite the bus attack. “The terror of knifings and shootings is clearly in decline — there is no contradiction; one is the more popular-style terror, the other is more organized,” Zisser noted.

The stabbing and shooting attacks seem to be in decline as a result of two main factors: Israel’s limiting of tensions by making moves to ease restrictions on Palestinians, and the lowering of incitement by the Palestinian Authority.

But neither of these factors halts the kind of determined and trained terrorist who would carry out a bus bombing. In contrast to a knifer or stabber who may wake up looking forward to a normal day and end up carrying out an attack prompted by anything from TV incitement to a family argument, bombers generally prepare for months. They normally have a level of motivation that won’t waver as a result of Israeli policies or if they aren’t hearing much incitement from the PA.

Everything indicates that Monday’s attack was carried out by a well-prepared bomber receiving instruction from a terror organization. The bomb seems to have been professionally made, and was strategically placed to inflict significant damage despite its small and inconspicuous size.

Determined terrorists who are backed by militant infrastructures never stopped trying to carry out large-scale attacks during recent months — they have just been foiled repeatedly. While the frequency of stabbings and shootings can be explained with reference to motivation and incitement, the infrequency of bus bombings in recent months can be explained more by the fact that security services are performing well.

Is there a take-away message? Yes. It is that Monday showed just what kind of hell can be experienced when security services don’t succeed, and that it’s worth considering how much worse things could be. What has allowed Israel to keep such large-scale attacks at bay is, in large part, effective security coordination with the Palestinian Authority. While the PA is a nightmare for Israel on in the political sphere, on the security front it is a godsend.

There is pressure within Palestinian society and in the political echelon for the PA to end this coordination, and many in Israel, justifiably angered by aspects of the PA’s political conduct in recent months, are acting blasé. They wonder why, given the PA’s anti-Israel incitement (currently toned down but still alive) and its angry pursuit of Israel thorough every international channel available to it, they should care about the loss of cooperation with this entity. But in this complex region the truth is that without the security coordination with the PA that has weathered even the worst diplomatic clashes, it’s entirely possible that Monday’s bus bombing would have been the latest in a series.