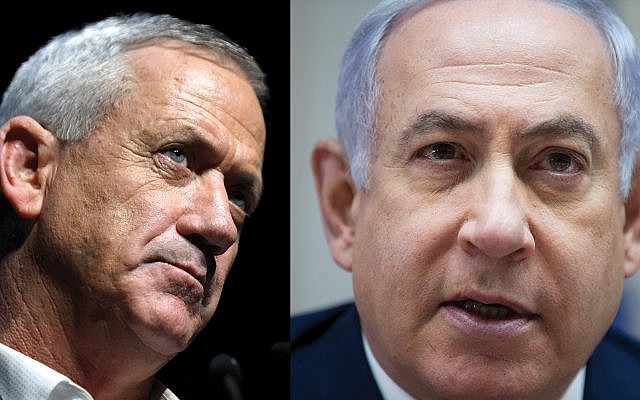 They are dueling “March surprises,” so to speak, Israel’s equivalent of the “October surprise,” named for shocking 11th-hour scandals that routinely rock American presidential elections.

First, on the eve of the Ides of March, came the bombshell news that the cellphone of Prime Minister Benjamin Netanyahu’s rival, Benny Gantz, had been hacked and that the contents — some of it potentially salacious — are in Iranian hands.

Netanyahu, who is fighting for his political life and locked in a neck-and-neck race with Gantz’s centrist Blue and White party, pounced. “If Gantz could not protect his phone, how would he protect our country?”

Less than a week later comes the bombshell news that Netanyahu pocketed a cool “16 million shekels” ($4 million), according to Gantz, in an alleged scheme surrounding Israel’s 2016 purchase of submarines from the German shipbuilder ThyssenKrupp. Gantz pounced: “It is a crisis of confidence in his leadership; it is a breakdown that cannot be repaired,” he said at a press conference this week.

And so it goes with just two weeks left in one of Israel’s most consequential elections in years. Blue and White suggested that Netanyahu or someone close to him leaked the news that Gantz’s phone had been hacked; about the submarine scandal story, Netanyahu fired back, “I didn’t get a shekel” from the deal. 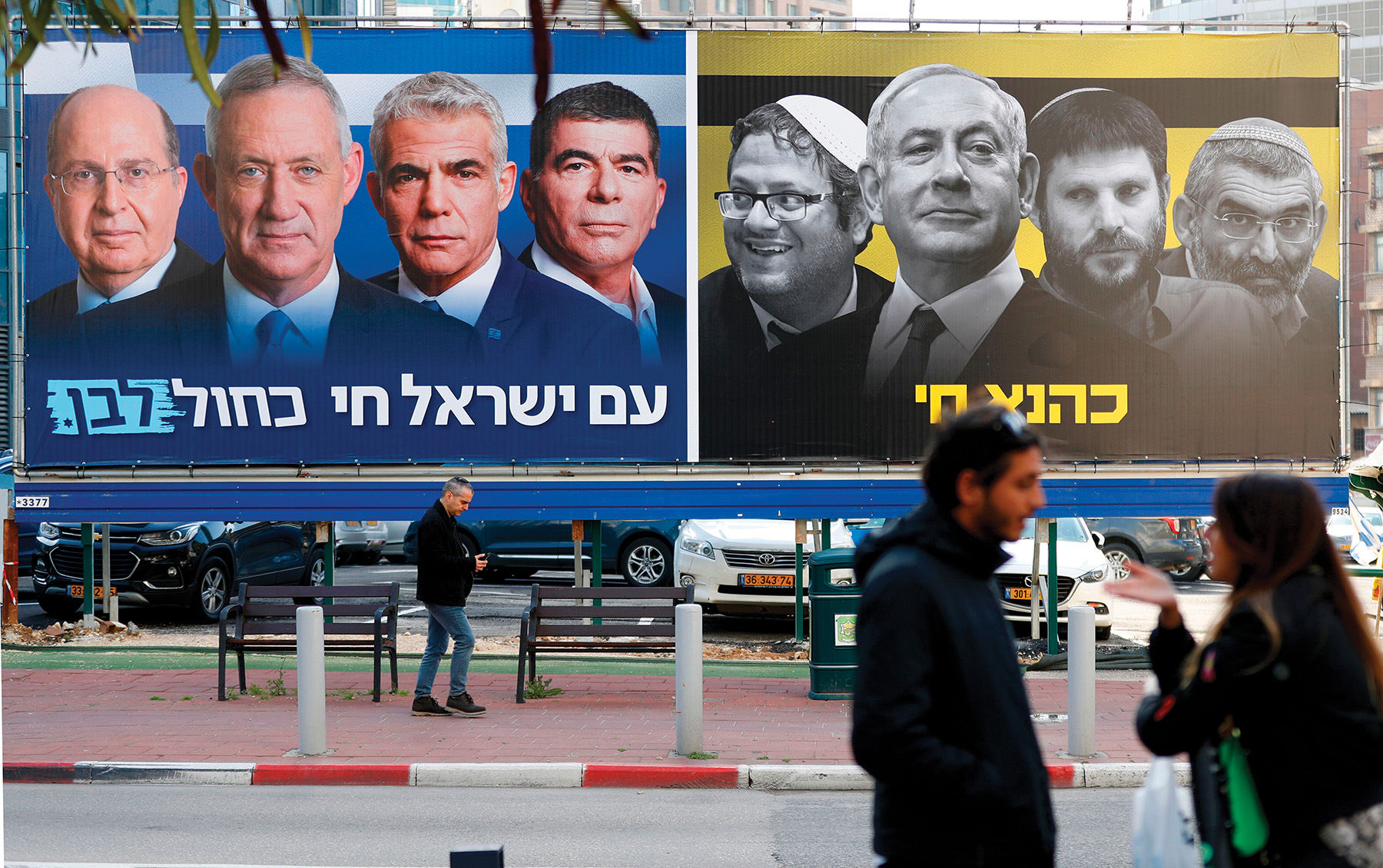 Campaign billboards in a Tel Aviv suburb show portraits of Blue and White party leaders, left, with the slogan “The Nation of Israel Lives,” and Benjamin Netanyahu and far-right politicians, with the slogan “Kahane Lives,” a reference the banned ultra-nationalist party. Getty Images

And yet, the two scandals do bring into sharp relief the contours of the race’s final days as Netanyahu tries to press his advantage on security, and Gantz tries to capitalize on Netanyahu’s already deep corruption woes.

Speculation is rife as to exactly what may have been on the phone. In a world that is still busy guessing whether Vladimir Putin has compromising information on Donald Trump and if so, what it is, the discussion immediately turned to this concept of kompromat.

The analysts went on a frenzy of speculation, raising the possibility that the phone may be something of a skeleton-containing closet that will reveal secrets, sexual or otherwise. Gantz has said that there is nothing compromising on the phone, but the scenario being raised is, for many Israelis, a scary one. If Gantz wins the election and there’s something compromising on the phone, could he become subject to Iranian blackmail?

Clila Magen, a crisis communications expert from Bar Ilan University, thinks that “the element of the unknown helps Netanyahu.” She told me that if the Israeli public knew what was on the phone, the story might die down. But as it stands, Netanyahu has an easy way to raise fears about Gantz. “There’s a factor of uncertainty and if Netanyahu uses fear, as he knows to, this may be a problem,” Magen said, predicting that the hacking “could do a lot of damage to Benny Gantz.”

The Netanyahu campaign, which had framed the election as a choice between opposites — a right-wing Likud and a “leftist” alternative — is now presenting the race as a stark choice on the issue of Iran. Netanyahu’s supporters are raising fears that he is strong on Iran while Gantz, though a decorated general and former IDF chief of staff, could end up being blackmailed by the Iranians. Netanyahu is claiming that Gantz is soft on Iran, that he failed to adequately oppose the West’s nuclear deal with Iran and even that Tehran is gunning for a Gantz victory.

For the last decade, Netanyahu’s top message has been that Iran is the ultimate external threat. Now an opportunity has arisen, one seemingly beyond his wildest dreams, to discredit an Israeli rival by referring to Iran.

But what if the story isn’t what it seems? What if this isn’t an opportunity that has just fallen into Netanyahu’s lap, but one that he, or people close to him, orchestrated? He is the boss of Israel’s security chiefs. Might his associates have told the media that Gantz’s phone was hacked?

That is Blue and White’s claim — though the journalist who broke the story, Amit Segal, insists his source had no connection to the prime minister. “To take classified materials from an Iranian cyberattack and use them against a political rival is crossing a red line,” said Blue and White candidate Yoaz Hendel, a former Netanyahu aide.

Blue and White says that the latest developments leave Netanyahu, not Gantz, discredited, because of his alleged role in the leak. The party has already written to Israel’s Attorney General Avichai Mandelblit calling for an investigation and claiming that the leak “clearly” came from “someone who has access to sensitive defense information and possesses an interest in harming Gantz.”

Some former intelligence figures seem to agree. The former Mossad chief Tamir Pardo said that intelligence operatives would never have leaked it themselves, hinting that he believes the information was released by the Netanyahu campaign. “The use of classified intelligence for political purposes is very serious,” he said.

Pardo argued that the hacking is something of a non-story, seeing that anyone can be hacked. But he views the leak as a travesty — a “terrorist attack on the democratic process.”

In the topsy-turvy world of political scandals, Blue and White strategists are trying to shift the conversation to another scandal, one that Gantz says is the “most serious national security corruption scandal in the history of the country.” (Netanyahu is already facing possible indictments on public corruption charges.)

For years, police have been probing whether corruption played a part in Israel’s 2016 purchase of submarines from the German shipbuilder ThyssenKrupp. It is suspected that several Israelis benefitted from a graft scheme. Netanyahu hasn’t been investigated in this case, though several close associates have.

This week, the case was back in the news, with a new development that Gantz says proves that Netanyahu “lied” on the issue of submarines.

Defense officials were unhappy that Egypt acquired similar ships to Israel’s. They wondered why Jerusalem hadn’t used the unofficial veto that defense companies often grant to customers, namely that they won’t sell similar equipment to nearby powers. Netanyahu has said that he tried to prevent Egyptian acquisitions. However, a report this week said that Netanyahu actually OK’d them.

Gantz promised, if elected, to set up a national committee of inquiry “to investigate this affair and all those involved in it.” He said that the overall decision to buy the submarines is tainted with corruption, and that information was hidden from security chiefs of the time, him and his party colleagues included.

He told journalists at a press conference: “Before you are three chiefs of staff and a security cabinet member from whom [the deal] was hidden that the prime minister was getting money. Sixteen million shekels. Sixteen million shekels that went into Netanyahu’s pocket. From a company that was directly connected to the submarines. It is a crisis of confidence in his leadership; it is a breakdown that cannot be repaired.”

Netanyahu said that Gantz is lying, insisting that he “did not get even a shekel from the submarine deal,” and saying that legal authorities have already reached this conclusion.

The opinion polling is close. Netanyahu’s Likud lost the top spot in opinion polls a few weeks ago, and its figures took a further hit after the attorney general announced his intention to indict the prime minister for alleged corruption (unrelated to submarines). Since then, Likud has been steadily climbing back, and soon after the leak about Gantz’s cellphone, the party rose back to the top spot. A survey for Channel 11 predicted 31 seats for Likud and 30 seats for Blue and White.

As polling day looms, the more it looks like the election could come down to who can convince the public that the other side is tainted by the most serious scandal. The election may well end up being a battle of the scandals.