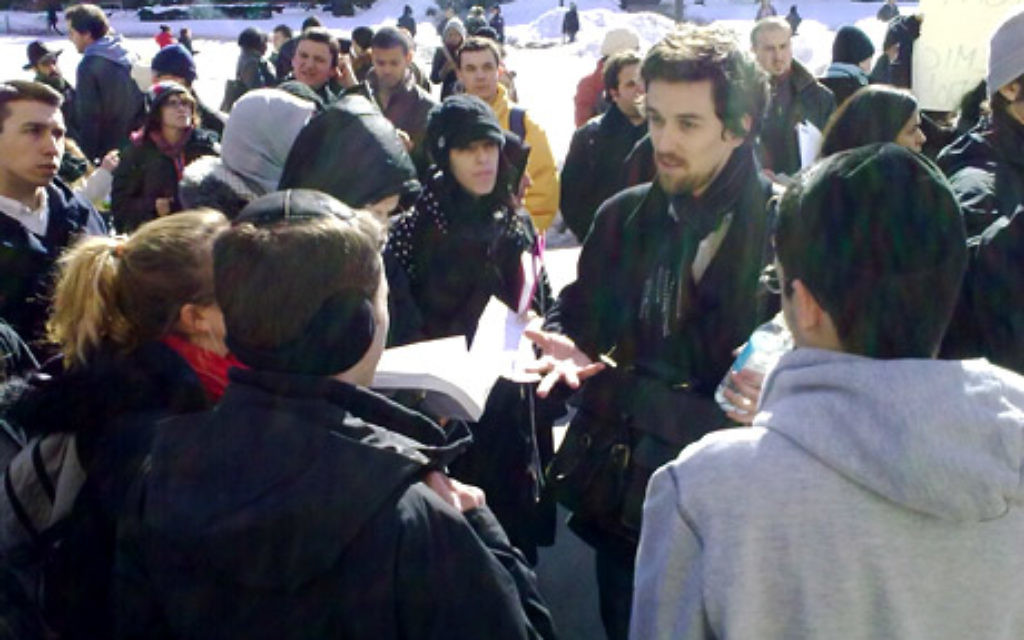 Some 50 students, professors and activists turned out last Thursday for a rally celebrating the appointment of Kristofer Petersen-Overton to an adjunct teaching position at Brooklyn College, but one of those unhappy with the event was the new professor himself.

The rally had been promoted as a celebration not only of the professor’s arrival on campus, where he now leads a weekly, graduate-level seminar on Mideast politics, but of academic freedom. And, indeed, the term came up repeatedly during the event, which took place in front of the college’s administration building and also drew more than a dozen students who objected to the professor’s appointment.

But Petersen-Overton, a 26-year-old doctoral student who makes no secret of his aggressively pro-Palestinian, anti-Zionist views, told The Jewish Week he was disappointed that some of his defenders turned their speeches into diatribes against Israel.

"I mentioned to some of the organizers that they should have planned it a little better," said Petersen-Overton, who added that he played no role in organizing the event. "They opened it up to whoever wanted to speak," detracting from the theme of academic freedom and raising the suspicions of those who opposed his hiring.

The rally recalled the events of the past month, beginning with the decision of Brooklyn College’s political science department to hire Petersen-Overton, who’s now beginning his fourth semester at the Graduate Center of the City University of New York.

The administration soon tossed out the appointment, saying that Petersen-Overton lacked sufficient qualifications for the job. But the move struck many as political, coming as it did on the heels of a denunciation of the professor by Assemblyman Dov Hikind (D-Brooklyn), who labeled him a supporter of suicide bombing. Only days later, though, the administration, faced with strong faculty sentiment in favor of the appointment, reversed course and rehired him.

Even more pertinent, though, the rally signaled that emotions over the appointment are still running strong and that Brooklyn College will have to grapple with the issues raised by the affair for some time to come.

Some of the fault lines over these issues could be seen last week, with much of the attention focused on the preparation and content of syllabuses, including the one Petersen-Overton created for his course.

Meanwhile, the professor’s outlook on issues related to Israel, Zionism and Palestinians emerged more fully in an interview with The Jewish Week. While not the demon some have portrayed him as – he considers terrorism "heinous," for instance, and he supports Israel’s right to exist – many of his views are bound to inflame the discussion, as the professor admitted.

The divisions even include perceptions of last week’s rally, where supporters of the professor and pro-Israel students who showed up to register their dissent initially shouted at each other and, later, conversed with each other. On at least two occasions, Petersen-Overton walked over to Jewish students to ask about their positions, according to participants.

Those kinds of scenes are precisely what should take place in the classroom, said Conor Tomas Reed, an organizer of the event who, like Petersen-Overton, is a student at CUNY’s Graduate Center and an adjunct professor in the CUNY system. "None of us wants to silence people. We want discussion; we want debate."

But Dina Kupfer, one of the 20 students enrolled in Petersen-Overton’s class and a pro-Israel activist on campus, said the rally "degenerated very quickly into an Israel hate fest." As for the professor, she said, he "presents himself fine – he says he wants open dialogue" – but she’s taking a wait-and-see attitude.

Kupfer, who in December researched Petersen-Overton’s papers, looked at his syllabus and shared the information with Hikind and others, organized a group of pro-Israel students last week to hand out leaflets near the rally and to present a petition to college administrators. The petition expressed their concerns over the professor’s syllabus, which they called "narrow" and "one-sided," and over the chances that his approach in the classroom would be fair and balanced.

The syllabus, a combination of required and recommended readings, includes such authors as Edward Said, Noam Chomsky, Joseph A. Massad and Nur Masalha, all regarded as radically anti-Israel by many Jewish activists, and Ilan Pappe and Neve Gordon, Israeli writers viewed in similar terms. Much fewer in number are those scholars, like Alan Dowty, Shlomo Avineri, Michael Doran and Jonathan Spyer, who are Zionist or pro-Israel.

"One has to differentiate between ‘required’ and ‘recommended,’" said Asaf Romirowsky, an adjunct scholar at Campus Watch, a project of the Middle East Forum, the Philadelphia-based think tank led by Daniel Pipes. "There’s an overwhelming slant here," with many of the pro-Israel scholars marked as "recommended," not required.

One of the decisive factors for Romirowsky is that Petersen-Overton includes Said’s 1979 book "Orientalism," a work arguing that the West has had a long tradition of making biased assumptions about Muslim and Arab culture, but doesn’t include "Islam and the West," Bernard Lewis’ well-known critique of Said. Exploring "Orientalism" and not examining "Islam and the West" ignores the huge debate over Said’s theories, leaving students with "a very clear one-sided agenda," Romirowsky said.

Like other scholars contacted by The Jewish Week, Romirowsky also expressed disbelief that the course’s original syllabus included no exploration of Iran, Turkey, Egypt and other Middle Eastern countries. Treating the Israeli-Palestinian dynamic as the only conflict in a region rife with tension and conflict is also a disservice to students, he suggested.

Asked for comment, Petersen-Overton said he’s made several "minor" changes to the syllabus, sending his students this week to a panel discussion about Egypt, but he’s made no changes to the Israeli-Palestinian portion of the syllabus. He also said he used as his guide the syllabus of Dov Waxman, a professor of Mideast studies at CUNY’s Graduate Center who has taught Petersen-Overton and recommended him for his current position.

But Waxman said the Israeli-Palestinian portion of his former student’s syllabus is different from his own and that Petersen-Overton includes some scholars he would never use in his own class. Said, for instance, "is not a Mideast scholar," Waxman said, and his writing on the Mideast "is much more political advocacy than scholarship." Similarly, Chomsky is a linguist, not an expert on the Mideast, and Ilan Pappe "sees himself as an advocate," not an objective historian.

They and several others on Petersen-Overton’s syllabus "would be red flags" for many students, creating "a certain charge," said Waxman. That doesn’t mean they shouldn’t be assigned, he added, but many of them should be balanced with others.

At the same time, some scholars pointed out, no one can judge a professor on his syllabus alone. Robert Cherry, an economics professor at Brooklyn College and a board member of the college’s Hillel, said two professors can have the very same syllabus but teach the course in profoundly different ways. It all depends on the weight the professor places on each item and whether or not he leads the class in critical discussion.

Mark Ungar, the political science professor who hired Petersen-Overton, said professors create their own syllabus but can ask for help if they want it. Very often, he added, they ask to see a previous syllabus for the course.

In Petersen-Overton’s case, Ungar offered help from the very outset and the doctoral student accepted it. But the help, he added, involved recommending material on other countries in the region and not on the Israeli-Palestinian conflict, a subject with which Ungar isn’t familiar.

"It wouldn’t have been the syllabus I would have put together if I taught the class," Ungar said, "but that’s not my job. When we hire someone, we give them the authority to create their own syllabus."

Cherry disagrees with that view, saying that academic freedom for adjuncts should begin once they distribute their syllabus – but not beforehand. "The department has influence, if not control, over the structure of the course, including readings and the topics to be covered."

As an example, Cherry cited a core, undergraduate course offered by the college’s political science and sociology departments in which the instructor is guided by a compendium of readings put together by full-time faculty members. The instructor can pick and choose, Cherry said, but the majority of readings have to come from that compendium.

The debate over academic freedom comes at the same time that one professor’s study of the subject is drawing attention from some quarters.

The study, "Academic Freedom: Moving Away from the Faculty-Only Paradigm," is by Arthur Gross-Schaefer, the chair of marketing and business law at Loyola Marymount University in Los Angeles.

Discussing his study, Gross-Schaefer said academic freedom is a tradition – not a Constitutional right – that allows academics to research and speak outside the classroom in pursuit of "the truth as they understand it." But he argues that in the classroom, "it’s a different ballgame. The classroom is not a pulpit."

Instead, Gross-Schaefer said, academic freedom covers not only the professor, but, also, students and the administration, both of whom he calls "shareholders" in the concept. Professors, he added, "have a duty" to use their academic training and knowledge in ways that "would allow their students to understand the complexity" of a certain subject and "receive a variety of valid academic points of view," not just their own.

Finally, the outlook varies on whether a professor should share his own views with students or keep those views out of the classroom. Waxman, who has lived in Israel and has his own views on the conflict, is a strong believer in keeping those views to himself – a subject he has discussed with Petersen-Overton – but his former student takes the opposite approach.

In the course’s first session, Petersen-Overton said, "I made clear that I’m a political animal, they’re political creatures, and we all have the capacity to dive into the material and judge it critically."

Of those views, the professor rejected claims that he accused Israel of genocide in one of his papers or that he dismisses the potential dangers of Palestinian nationalism. "I don’t think what Israel is doing is genocide," he said. "I think it’s occupation by public relations – trying to make the occupation as palatable as possible," both to the Israeli public and to the international community.

He believes Jews are a people, entitled like other people to a state of their own, he said. But he views the manner in which the State of Israel was established as an injustice, saying its creation involved the forced expulsion of 750,000 Arabs – an assertion disputed by other historians, who note that the expulsions took place during a war that Israel’s neighbors began.

Petersen-Overton believes that, while Israel may or may not have been a colonial power at its outset, the country has evolved into one since the Six-Day War. Yet he also thinks that Israel has legitimate security concerns, "just like any state," and he condemns the rocket attacks on Israeli civilians from Gaza, where he interned four years ago.

Those who opposed his appointment also may be surprised by Petersen-Overton’s views on the boycott and divestment campaign against Israel.

Asked whether he sees himself as a scholar or an activist, the professor said he regards himself "as a scholar in my scholarly work and as an activist in my activist work. The answer would be both."