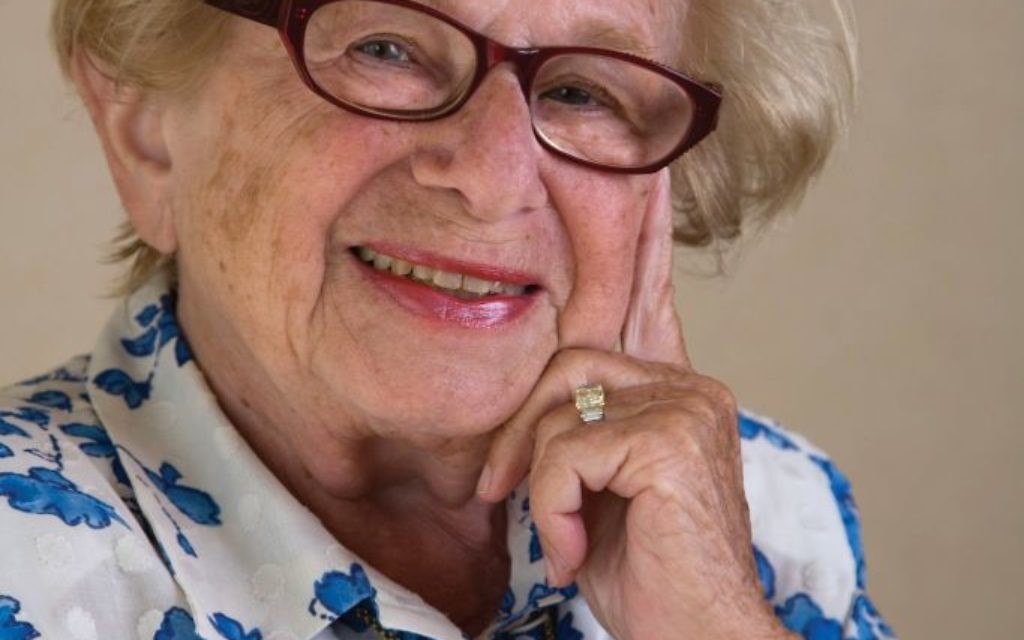 “I’m busier than ever — amazing!” says Dr. Ruth Westheimer, 85, older but ever ebullient. A biographical play, “Becoming Dr. Ruth: The Unexpected Journey,” written by Mark St. Germain with her support, is running Off-Broadway (“I prefer ‘near-Broadway’ to Off-Broadway,” she laughs). She is working on her 36th book. A passionate Zionist, in recent years she has made several documentary films about Israel’s minority populations — Druze, Bedouins, Ethiopians, Chercassians — exploring their family lives and sociology. She’ll be teaching a course next semester at Columbia University on how the American family is depicted (not very well or kindly) in the media.

And now a new television show, “The Wisdom of Dr. Ruth Westheimer,” will premiere Nov. 18 on Shalom TV, with new shows each Monday at 7 p.m., and re-broadcasts throughout the week.

The program, she explains over the phone, “will be 15 minutes, on different topics — not just sex. But of course, since this is Shalom TV, I’ll be talking about sexuality in the Jewish tradition and Jonathan Mark,” she teases with a giggle. (Dr. Ruth and I wrote a book together, “Heavenly Sex,” about Jewish romance and traditions.) “We had a good run with that,” she says of the book.

The Jewish tradition is her starting point. Hers is a story of growing up in a traditional German home before the upheaval of the Holocaust; being a child refugee; discovering sex on a kibbutz and discovering that she was a keen sniper for the Haganah, before marrying and raising two children, both of whom are now raising Jewish families of their own.

Every time she sees the “Becoming Dr. Ruth,” and she’s seen it 15 times, “I’m on the edge of my seat, having to pinch myself not to talk instead of the actress [Debra Jo Rupp]; it’s not me down on stage, it’s her — and the actress is fantastic!”

“Becoming Dr. Ruth” came about when she went to see St. Germain’s “Freud’s Last Session.” “I went backstage and he asked if he could visit my office. I thought, ‘Terrific! Freud has a sexual problem and he’s coming to see Dr. Ruth!’ Instead, he wanted to write a play about me.”

On Shalom TV, “I will be as old-fashioned and square as I usually am. I’ll cover relationships, education, family life and shalom bayit,” how to keep a sense of peacefulness in the home. Her broadcasts are peppered with humor and laughs. “I believe that a lesson taught with humor is a lesson retained, but all of this is very serious.”

Dr. Ruth wonders about what’s lost when “young people walk together and instead of holding hands and talking, each one is texting.” She advises parents to monitor their children’s Internet lives, but understands the Internet’s value for adults to advance sexual literacy. “Absolutely! I have nothing against a couple, he or she or together — not with their children — watching a sexually explicit movie. If that can help them to be aroused, to get away from the worries of everyday life, that’s fine; even pornography (if it’s not violent or underage). But there is a lot of sexual mythology on the Internet and you have to approach it critically.”

At 85, “I will definitely talk about sexuality and older people. Energy may be elusive for the elderly, “so perhaps older people should seek intimacy in the morning, when the testosterone level is higher.”

Nothing wrong with sleep, even for the young. Dr. Ruth says, “I will tell Orthodox newlyweds, if they are having sex for the first time, instead of having sex after the wedding when they are tired,” better to cuddle and wait for dawn.