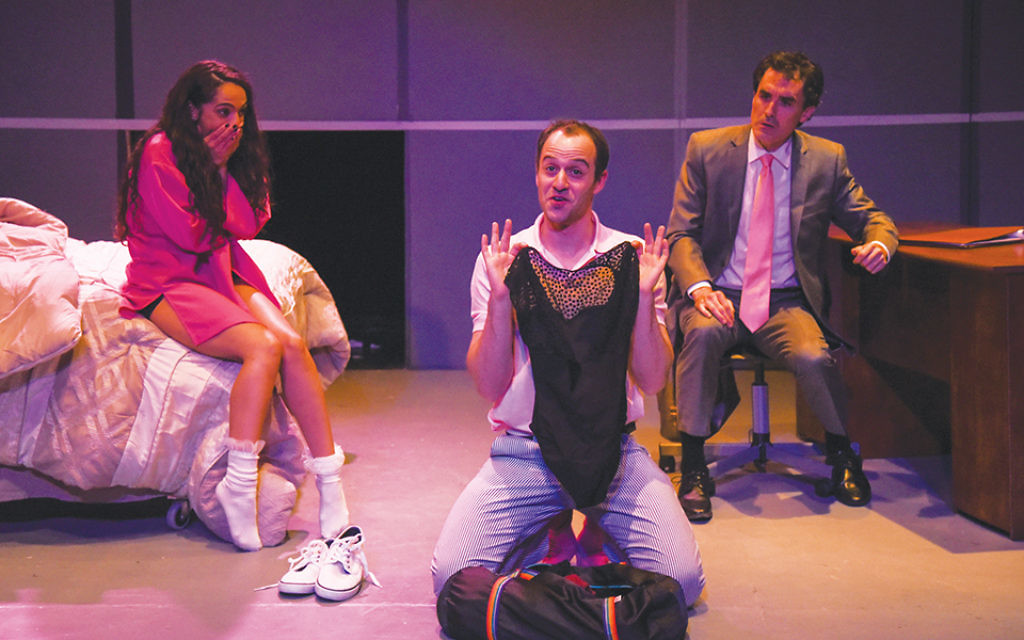 Other than show business, no American industry is as identified with Jews as the garment industry, which employed more than a million Jews at the turn of the 20th century and provided an outlet for the talents of many of the world’s most famous fashion designers at the turn of the 21st. But for playwright Oren Safdie, son of the Israeli architect Moshe Safdie, the clothing industry has a dark underside that exploits and objectifies women.

Safdie’s new play, “Unseamly” is based on the spectacular fall from grace of Safdie’s own first cousin, Dov Charney, the head of American Apparel, who was booted from the company for sexually harassing numerous female employees. The play opened this week in New York’s fashion district, just a week after American Apparel filed for Chapter 11 bankruptcy protection amid multiple lawsuits against the company both for Charney’s outrageous sexual behavior and for alleged financial misconduct.

Directed by Sarah C. Carlsen, “Unseamly” centers on a meeting between a 20-year-old Latina store manager, Malina (Gizel Jimenez) and an attorney, Adam (Tommy Schrider), whom she asks to file a suit on her behalf against her employer, a multinational clothing company called The Standard. Malina charges that the CEO of the company, Ira Slatsky (Jonathan Silver), sexually harassed her over a period of eight months, during which they had an intense sexual relationship. Much of the play is told in flashbacks, as Ira and Malina’s first tryst, which occurred in a hotel room on her 18th birthday during New York Fashion Week, is shown from each participant’s point of view (à la the popular Showtime series, “The Affair.”)

Charney launched American Apparel in 1989. The company, which is based on Los Angeles and has retail stores in New York and other major cities, has long prided itself on using domestic labor rather than overseas sweatshop workers, and has won praise for promoting gay rights, eco-friendly practices, and immigration reform. But American Apparel has also been widely criticized for irresponsibility in its advertising campaigns, which present women in pornographic poses. (It was also sued in 2007 by Woody Allen for its billboards that used pictures of him dressed as a chasidic rabbi in “Annie Hall.”) Last year, after seven sexual harassment suits had been filed against the company, Charney was dismissed.

Safdie is the author of numerous plays, including “Private Jokes, Public Places,” “Jews and Jesus” and “Fiddler Sub-Terrain.”

Like Charney, he grew up in Montreal; now he lives in Los Angeles.

In an interview, Safdie told The Jewish Week that he penned the play to raise awareness of the “sexualization of youth,” which he saw his cousin’s company promoting. “It was the dinner table conversation that we never had,” he said. “My family only wanted to look at the positive aspects of the business, even though one’s family should be the first line of moral clarity when a member is misbehaving.”

Safdie was especially pained by having to take his daughter to kindergarten each morning past billboards with “a girl who looks like she is 16 taking off all her clothes,” which he called “an advertisement for what goes on within the company and within the fashion industry.” The playwright speculated that it is “not accidental” that so many prominent Jewish men, from Eliot Spitzer to Dominique Strauss-Kahn to Anthony Weiner, have been caught in shocking sexual misbehavior. “After fighting so hard to get in the door,” he said, “perhaps the power goes to their head and an inferiority complex turns into a superiority complex.”

In writing about the corporate culture that demeans women, Safdie said that he was fascinated by the legal question about whether or not a woman who works for a fashion company is choosing to expose herself to an environment in which “talking dirty,” along with nudity, “is par for the course.” While Ira has what the playwright called a “very flamboyant” and raunchy way of speaking, Malina is depicted as flagrantly opportunistic and sexually aggressive with both Ira and Adam.

Little wonder, then, that the play has had its own share of controversy. When it had its premiere last year in Montreal, Safdie recalled, some critics (whom the playwright called “militant feminists”) charged that he was perpetuating exactly the same images of women that the play purports to undermine. “They said that Ira and Malina deserve each other as they lead each other straight to the bottom of the toilet,” Safdie said. Anger spilled over onto the playwright; Safdie went to the police after he received a threatening unsigned greeting card with his Social Security number scrawled on it — his credit card number was subsequently compromised.

Silver originated the role of Ira in Montreal. The challenge in portraying him, the actor said, is in “making him charming” and in being convincing in “making his argument, which is that his company has done a lot of good and that his detractors are jealous or looking for a payout.” He views his “misogynistic” character, which he calls a “Jewish hustler and playboy,” as, like Charney, inauthentic to the core, “pretending to be something that he wasn’t.”

Carlsen, who also directed the play in Montreal, views “Unseamly” as about the “male id,” which, she pointed out, far too frequently gets into a “primitive, animalistic feeding frenzy.” The play, she observed, is about “two men who see this woman as a way to fill themselves up.” But the play also asks, she said, “who’s playing whom,” adding that Malina “knows her sexual power, since it’s the only currency that she, as a young, fetishized woman of color, has been taught by society to use.”

Caroline Heldman, who teaches politics at Occidental College in Los Angeles, has not seen “Unseamly.” But she told The Jewish Week that she knows women who have worked for American Apparel, both in the corporate office and as models, and she lamented that women often believe that to be sexually objectified is a form of empowerment. Indeed, for all its progress against racism, homophobia and other ills, Heldman noted, the political left has a “blind spot” when it comes to women, “routinely turning their bodies into sex objects and body props in entertainment and other media.”