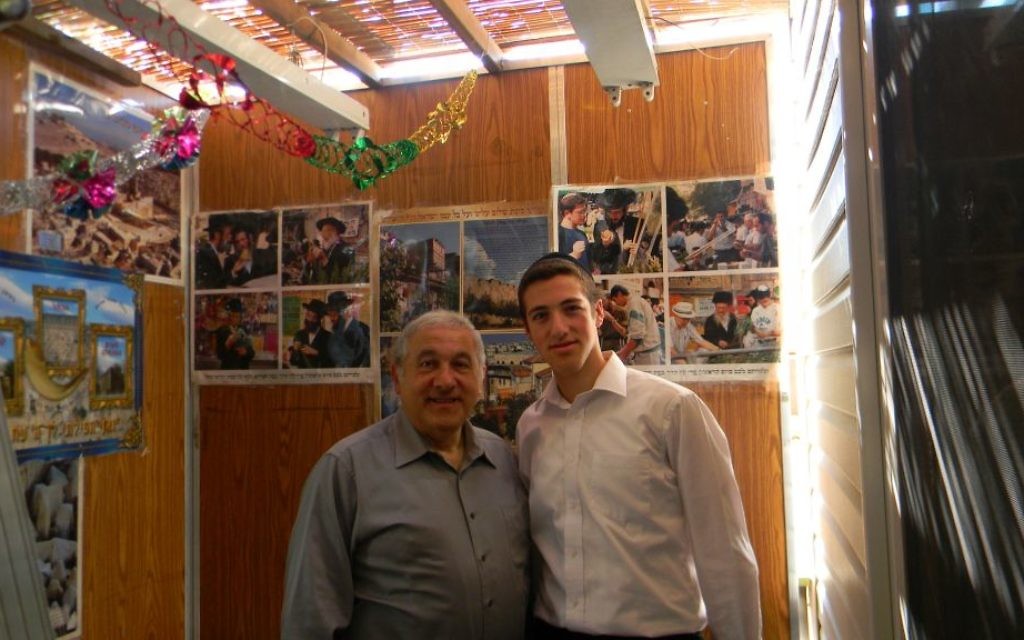 When Avi Weiss was a kid growing up in a Williamsburg apartment, he and his family were guests in other people’s sukkahs, but never had their own.

That changed when he bought his own house in Flatbush as an adult in 1977.

A few years after buying his first sukkah, Weiss and his family felt the need to upgrade as prefabricated offerings increased, and bought a larger, sturdier model. But given his reverence for the traditional hut, he was reluctant to simply toss it to the curb.

“I knew someone could use it, so I put an ad in one of the local papers,” recalled Weiss, (who should not be confused with the activist rabbi of the Hebrew Institiute of Riverdale by the same name.)

The 63-year-old founder of a medical testing company that screens life insurance applicants gave away that sukkah to the first caller and was happy to have done a mitzvah.

But the calls kept coming.

That’s when his daughter, Bracha Leah, then 14, had the idea to put another ad in the paper looking for used sukkahs with the intention of matching them to sukkah seekers.

And the Sukkah Shadchan was born.

For the past eight years, the Weiss family home on East 9th Street has become a clearinghouse for sukkah trafficking, sometimes matching up to 65 units with grateful new owners.

And through it all, no money changes hands.

“If someone has that old Sukkah lying around in the garage we can put it to use,” says Weiss. “Over the years word got out and we started getting calls beginning Rosh Chodesh Elul [the start of the holidays season]. We started to keep a list.” No more advertising — word of mouth does the trick these days.

The operation was and remains low-tech and extremely low budget. There is no Web site or hotline, just the family’s home number, 718 998-6596. No Excel spreadsheets or even computers involved, just pens and yellow index cards in plastic trays organized on the dining room table by neighborhoods: Borough Park, Flatbush, Williamsburg, Monsey, The Five Towns, Far Rockaway.etc. A New Jersey tray includes Teaneck, Elizabeth and Lakweood calls. Another tray is for "miscellaneous." The farthest call came one year from Toronto.

“We try to keep people in the same neighborhood,” says Weiss. “Sometimes if we know a family has a special need we will bump them up ahead in the list.”

One year the Weiss family got two calls from Monsey, a donor and a seeker, and discovered that the families were next-door neighbors. “They had to go through Brooklyn to get in touch with each other,” said Weiss with a laugh.

In addition to sukkahs, the Shadchan [matchmaker] also matches organic roof material, or schach, such as bamboo rods or rolled mats with new owners.

Full disclosure: The Sukkah Shadchan helped this writer obtain a free 8×10 schach matt, saving him the retail cost of $88-$120. Customer service was excellent. After arrangements were made with a Flatbush resident for pickup, one of Weiss’s daughters followed up to make sure the transaction was going smoothly.

As his family grows, Weiss is bringing new members into the operation, most recently his grandson, Aron Lowenthal, 16. They hope the operation will one day “go global,” serving Jewish communities around the world.

"I deputized him," said Weiss. "He ran the show this year."

"It feels good to help people," said Aron, who hung up signs at his yeshiva, Torah Temima, soliciting used sukkahs.

The Shadchan operation not only saves people money and helps them observe the mitzvah but also helps the environment by reducing trash in landfills and fulfills the Jewish custom of ba’al taschis, avoiding wastefulness.

Selling new sukkas, especially in Brooklyn, is a year-round, highly profitable business. But Weiss says no one minds that he is taking a small bite out of the industry. He sometimes gives his card to sukkah salesmen to give out to people upgrading with new sukkahs who are disposing of the old model.

This year's total, as of Sunday morning, was 49 matches made. On Sunday, Weiss was still getting calls from last-minute builders who change their plans or find their existing sukkahs unusable.

“My wife is always glad when she lights candles on Sukkos [evening],” he says with a laugh. “The phone finally stops ringing.”