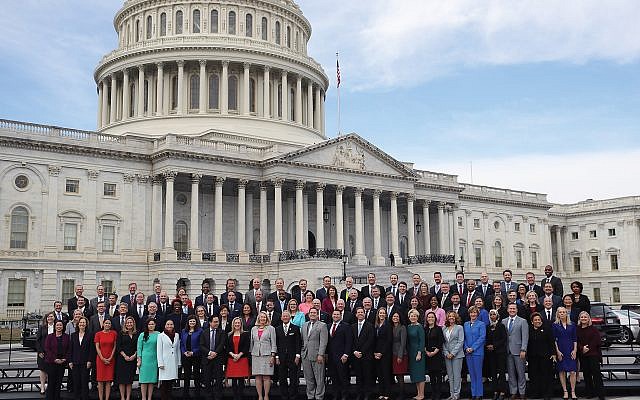 In the Passover Seder next month, Jewish families around the world will recall how “In each and every generation, they rise up against us to destroy us, and the Holy One, blessed be He, rescues us from their hands.”

That has unfortunately been historically accurate, since the days of Pharaoh, to the Babylonians, Haman, Greeks, Romans, Crusades, expulsion from Western European countries, pogroms in Russia, the Holocaust and the repeated attempts to annihilate the State of Israel.

The massacre of Jews at the Tree of Life synagogue in Pittsburgh in October, the deadliest attack on Jews in American history, was a painful reminder that Jews are not entirely safe in the U.S. now.

Especially following that attack, there can be no excuse for any public figure, certainly elected officials, to engage in any form of anti-Semitism. It should be obvious that just like there is zero tolerance in America for statements against women and the LGBT community, no anti-Semitism can be tolerated, accepted, or explained away as ignorance.

Therefore, the dual loyalty canard of freshman Minnesota Congresswoman Ilhan Omar was particularly offensive. The fact that she reaffirmed her statements even after her Democratic Congressional colleagues asked her to apologize proves Omar’s offenses were intentional. Her remarks were designed to introduce anti-Semitism into the mainstream debate and to legitimize and foster the discussion.

In the final analysis, anti-Semitism is a disease that infects the anti-Semite. We may be the victims of it, but the disease is theirs.  The BDS movement ultimately victimized the Arab community but nevertheless was a manifestation of anti-Semitism.

The Democratic leadership disappointed much of the Jewish community by not insisting on a Congressional resolution exclusively condemning anti-Semitism. This surrender to extremists in the party’s progressive wing is a frightening omen for the future as that wing’s power grows.

House Majority Whip Jim Clyburn made matters worse by suggesting that Omar had a “more personal” relationship to suffering than the descendants of Holocaust survivors. For a man whose job is to build a consensus among the new Democratic majority, he should have known better.

Those advocating giving up on the Democrats have forgotten that Israel’s bipartisan relationship is its top strategic asset.

Nevertheless, the mainstream Democratic Party remains pro-Israel. The leadership remains in the hands of unquestionably pro-Israel members of Congress like Elliot Engel and Nita Lowey and not the likes of Omar, Rashida Tlaib or Alexandria Ocasio-Cortez, who foolishly met with the anti-Zionist Neturei Karta fringe group.

There are 32 Jewish Democrats in the House and Senate whose efforts for American Jewry and for Israel cannot be underestimated, as well as non-Jewish Congressmen like Tom Suozzi of New York, who rightly condemned Omar.

It is that mainstream Democratic party that must be nurtured by the American Jewish leadership, so it doesn’t get taken over by extremists and overt anti-Semites like Labour in Britain. Those advocating giving up on the Democrats have forgotten that Israel’s bipartisan relationship is its top strategic asset.

While empowering that mainstream, it is important to keep fighting the fringes, so their views do not gradually become accepted. The best approach is that of AIPAC, which has been working sensitively to maintain support for Israel across the aisle, even when it has been dragged into the headlines.

“Charges of dual loyalty are anti-Semitic and insult millions of patriotic Americans – Jewish and non-Jewish – who stand by Israel,” AIPAC courageously tweeted in response to Omar’s attack. “Our alliance with Israel is in the U.S. national interest. We will not be deterred from exercising our right to advocate for a strong US-Israel relationship.”

It is that spirit that must unite the Jewish people in the face of challenges that are intensifying. Unity in the American Jewish community is more important now than ever, as is educating Jews so they appreciate their background. We need to eradicate ignorance among all Jews and especially young Jews.

Each individual can do his or her part, simply by learning more about Israel and Judaism. Increasing attendance even beyond 18,000 at the AIPAC Policy Conference would send a powerful message to Omar.

As the Hebrew phrase goes regarding encountering obstacles: “We have overcome Pharaoh. We will overcome this, too.” We must.

The author is the co-president of the Religious Zionists of America and chairman of the Center for Righteousness and Integrity and serves as a committee member of the Jewish Agency. martinoliner@gmail.com