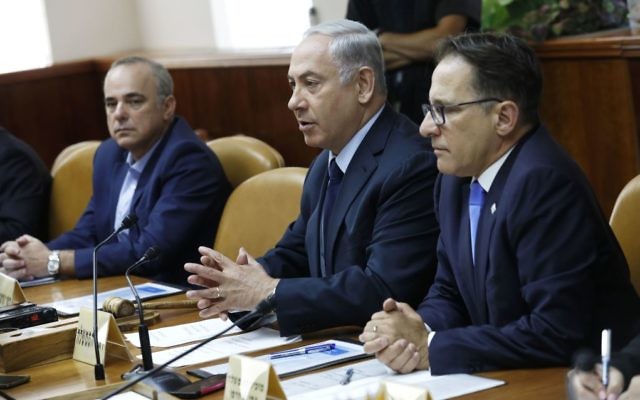 One could call the current scene in Jerusalem politics as usual.

A former prime minister, Ehud Olmert, was released from prison in July, having served 16 months of a 27-month sentence for obstruction of justice, fraud, bribery and breach of trust. Now his successor, Benjamin Netanyahu, is suspected by police of bribery, fraud and breach of trust in several cases. One is for allegedly receiving illegal gifts from wealthy supporters. Another is for allegedly trying to make a secret deal with Arnon Mozes, the publisher of Yediot Ahronot, an Israeli daily often critical of Netanyahu. According to recorded phone calls between the two men, they discussed the paper giving the prime minister more favorable coverage in return for his weakening the financial success of Yediot’s main competitor, Israel Today, the Sheldon Adelson-owned daily widely seen as Netanyahu’s greatest booster.

While Netanyahu has dismissed the latest charges as a “political witch hunt,” his critics are predicting that this is the beginning of the end of his reign, which, if he serves his full tenure in office, would make him Israel’s longest-serving prime minister, surpassing David Ben-Gurion, who served 13 years. The fact that Netanyahu’s former chief of staff and close ally Ari Harrow, who taped the Mozes-Netanyahu conversations, has agreed to testify as a state witness, was seen this week as a major blow to his former boss.

But given Israel’s complex political system, it is likely that these cases will drag on for years. And according to Israeli law, even if a prime minister is convicted, he or she does not necessarily have to resign, though this is unchartered territory for a young country that has seen a president, Moshe Katsav imprisoned for rape and a former prime minister, Olmert, jailed for political corruption.

Even if there is no dramatic outcome in Netanyahu’s situation, his political and diplomatic problems are almost certain to increase. Palestinian Authority President Mahmoud Abbas, already reluctant to come to the peace table, may well use Netanyahu’s troubles as a further excuse. The PA leader claims that he decided not to close a peace agreement with Olmert when the Israeli prime minister was in legal hot water and close to resigning in 2009. Abbas feared the next Israeli government would not honor the generous deal.

It’s no secret that Netanyahu has made numerous political enemies over the years, and there are those in the Likud, his own party, who would like to see him go. But so far, despite widespread frustration with Netanyahu, there is no one on the political horizon seen as capable of filling his shoes, particularly on issues of national security. The prime minister’s latest, and more pointed, round of problems at home may lead to more intrigue, but history has shown not to count him out so fast.