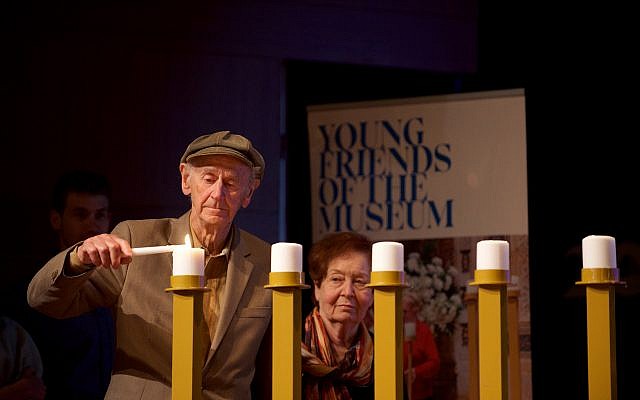 Holocaust survivor Manny Lindenbaum lights a candle at The Museum of Jewish Heritage on Thursday evening. Courtesy of Perry Bindelglass

It was a parents act of love, but it felt like betrayal to their eight-year old son.

“They turned their back on me,” Manny Lindenbaum told the crowd of more than 400 young Jewish professionals who gathered last night at The Museum of Jewish History in Lower Manhattan for an event in honor  Holocaust Remembrance Day.

“I didn’t understand that they were heroes saving my life,” he told her, speaking of his father, Otto, and mother, Freida.

The event was organized by Young Friends Of The Museum in conjunction with Manhattan Jewish Experience where board member Miriam Leichtling interviewed Lindenbaum on stage.

Though much of the world had closed its borders to Jewish refugees at the time, England made provisions following Kristallnacht in 1938 to take in about 10,000 children as part of the Kindertransport. Manny and his brother, Siegfried, would be among the last to join the group.

Now 87, the New Jersey resident told the audience that at the time his emotions nearly had him killed. When his older sister Ruth wasn’t turned away from the boat transporting them to England, he ran away. She found him and put him back on the boat. Years later he learned she had been murdered in Auschwitz.

“I’ve never been able to get past the fact that my sister died,” he said. “She should have been on that boat and not me. The only way I can justify my existence to myself is to be doing something to make a difference. I always feel her with me. I don’t think there’s a day in my life that I haven’t thought about her.” 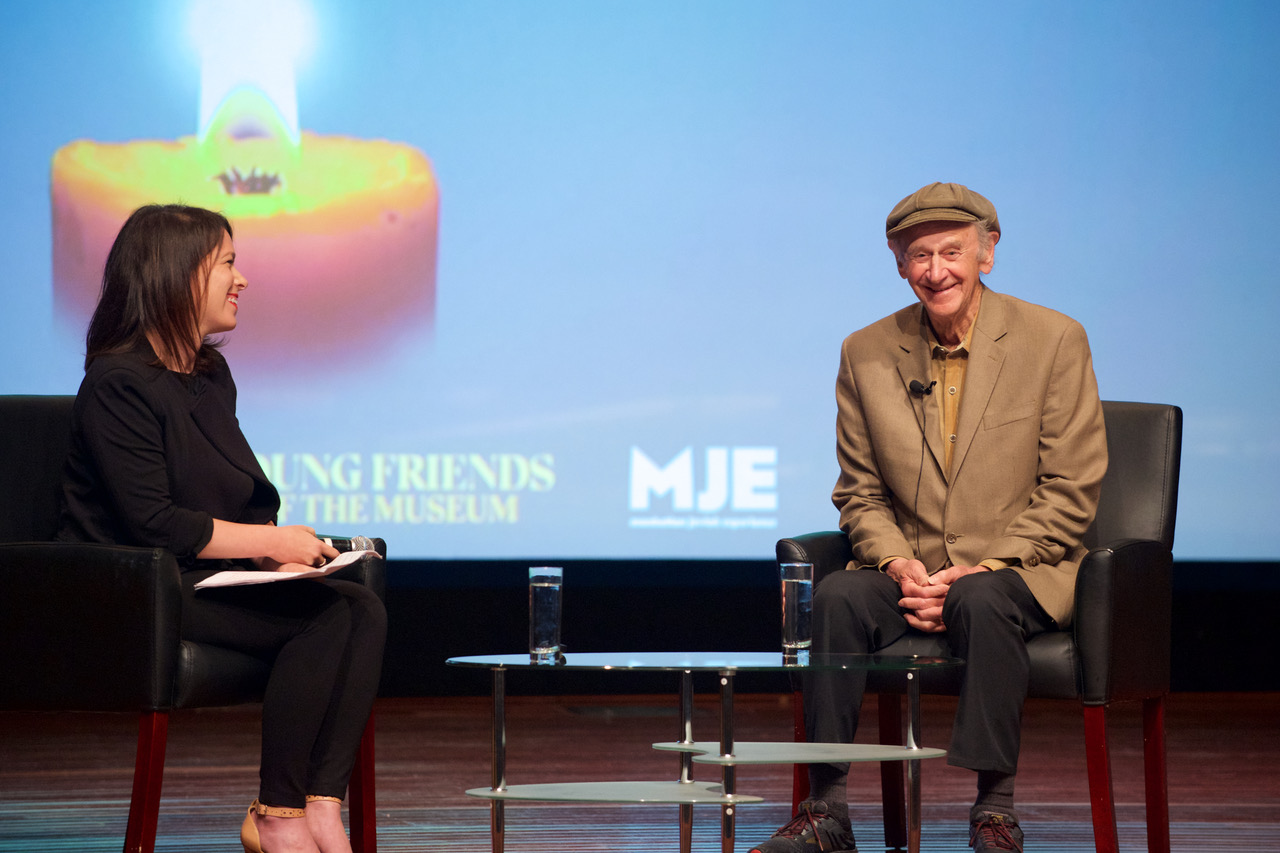 Lindenbaum recalled troubling signs in the late 1930s as the Nazis made life increasingly bad for the Jews: His father was forced to paint the word “Juden” on his clothing store. His sister’s non-Jewish friends stopped coming over to play. His brother got beat up in school.

He also recalled his grandfather chanting “Lecha Dodi” as he sat on his lap on a train bound for Zbaszyn, Poland. The train had been intentionally delayed until Friday night to force Jews to be in violation of shabbat.

His family was rounded up on October 27, 1938. He was horrified when exactly 80-years to the day later, the Tree Of Life Synagogue shooting occurred in Pittsburgh, killing 11 Jews during a shabbat morning prayer service.

This year Yom Hashoah commemorative ceremonies took place under the specter of increasing anti-Semitism. At the event, Rabbi Mark Wildes of Manhattan Jewish Experience echoed the call of Rabbi Yisroel Goldstein of Chabad of Poway, who was injured in last week’s shooting in Poway, California, to go to synagogue this Shabbat. He also urged people to take classes on Judaism, learn Hebrew or visit Israel.

“There is no better way of giving honor to those whose lives were taken than by living some of that life ourselves,” he said. He called on Jews to support Israel “even more” following these recent attacks.

Also at the event, Israeli Ambassador to the United States Dani Dayan,  spoke of the need for a strong and robust Jewish state.

“We thought after the Holocaust, anti-Semitism would disappear from the face of the earth. But we were wrong,” Dayan told The Jewish Week following his speech.

“We see the demonization of Jews is happening. What happened in Pittsburgh is a pogrom. What happened is California is a pogrom. Cartoons like that…” he said, referring to an anti-Semitic cartoon published in the NY Times that was later removed. “You can see in this museum where we are. It’s not the same. The difference is now we are more experienced and when we see anti-Semitism we have to stop it and not let it rise to diabolical dimensions.” 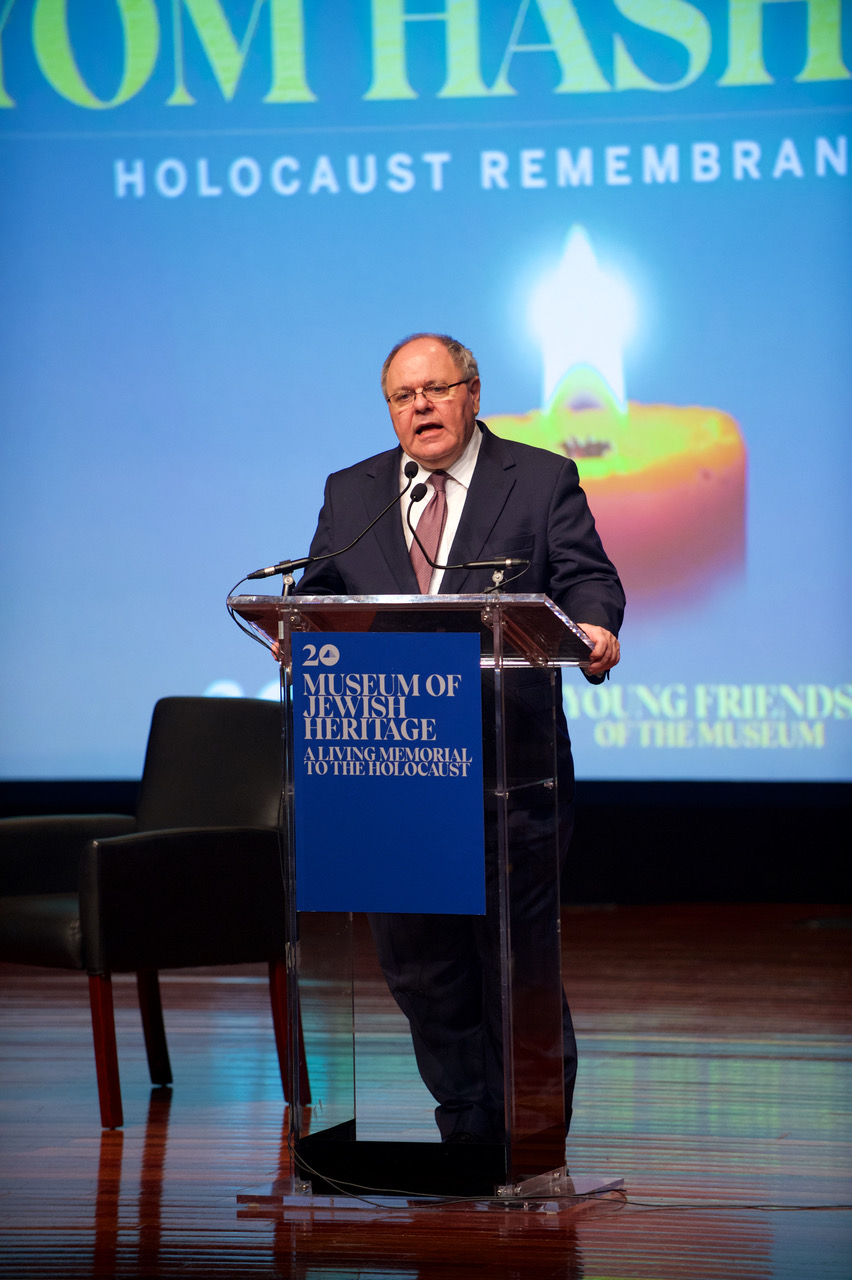 Dani Dayan, Consul General of Israel in New York told the audience he cried when he visited Auschwitz 10 years ago and a strong and robust Israel is crucial. Courtesy of Perry Bindelglass.

As he was leaving the museum, Lindenbaum told The Jewish Week he was surprised to see the recent uptick in anti-Semitism here in the United States.

“If you would have told me 10 years ago there would be two synagogue shootings in America, I would have never believed it,” he said.

He added that citizens are bystanders if they don’t urge for laws against automatic weapons.

Now Lindenbaum gives talks at schools around the country encouraging students to speak up against injustice and not be bystanders.

“There’s a reason why I’m here,” Lindebaum said. “It’s to try to make a difference. I don’t do enough, but I do some.”