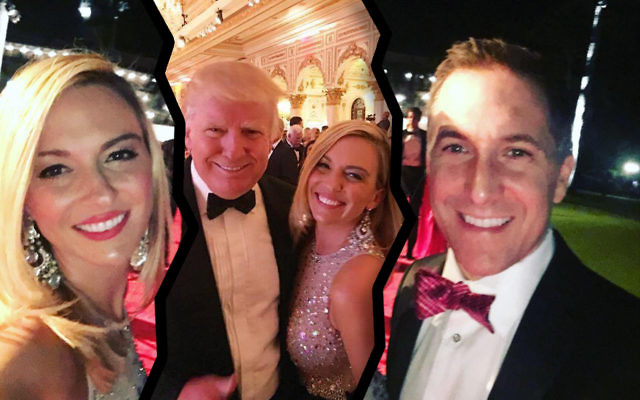 She’s blaming Donald Trump, among other reasons, but it turns out the couple should have listened to their rabbi.

In interviews and a news release, Lynn Aronberg describes herself as a Republican and a big fan of the president, and cites the flak she gets for that and her husband’s failure to defend her as the reason for her marriage’s demise.

Lynn Aronberg, nee Lewis, says she hangs out with the Trumps at Mar-A-Lago, the president’s country club and winter retreat.

“So what if I like Ivanka Trump or a conservative issue on social media,” Lynn Aronberg told a local news site, Jose Lambiet’s Gossip Extra, back in February, when the couple filed divorce papers. “So what if I invite Melania to be in my book group,” she added, reasonably enough.

Dave Aronberg, a former state senator, was elected to his current office in 2012.

“Dave is bipartisan,” the news site quoted her as saying. “But he’d tell me how people would go up to him to criticize me, and it didn’t sound like he was defending me.”

There was also the matter of babies — she wants ’em, he doesn’t, or so she says.

Lynn, a former Miami Dolphins cheerleader turned public relations consultant, used the tools of the latter trade this week to get her version of the story out.

“Dave and Lynn Aronberg Sign Amicable Divorce Settlement Putting an End to What Some Were Calling The Trump Divorce” was the heading of the news release sent by a public relations firm representing her, the New York Post reported Thursday.

All this may have been avoided had they listened to the rabbi who married them. Flashback to Gossip Extra’s extensive (and exclusive!) coverage of their 2016 wedding:

Rabbi (Stephen) Pinsky warned the newlyweds that not every single day would be that perfect.

He then handed a single red rose to the bride and groom and told them to give it to each other.

“Remember these roses were your first gifts as husband and wife,” Pinsky said. “When things get tough, leave one on your bed or the kitchen table to help you remember the blessing of family.”

Did they heed his advice? It doesn’t sound like it. Then again, it looks like trouble was brewing even before the wedding. Here’s the engagement video, with snapshots of encomiums the couple deliver to one another.

“She is always supportive of me,” Dave Aronson writes at 2:53, “from changing her faith to softening her Republican principles.”

Guess she didn’t soften them enough.