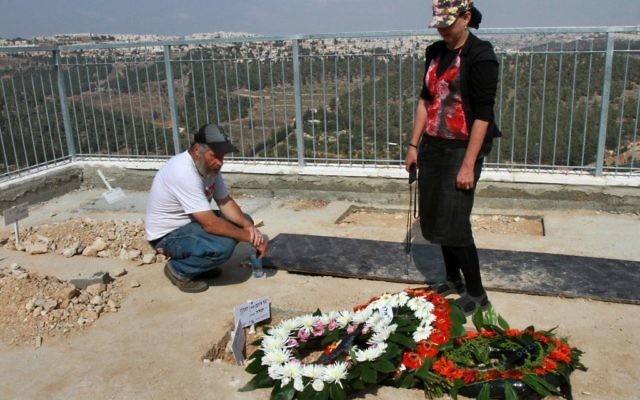 Editor’s Note: Following is an excerpt from the eulogy delivered by Yagil Henkin, an IDF military historian, for his brother, Eitam, and sister-in-law, Naama, who were murdered in their car on Oct. 3, presumably by Palestinian terrorists, near the Jewish community of Neira in the West Bank.

Eitam and Naama are “Harugei Malchut,” the term used for those who died as part of the unceasing struggle of the Jewish people.

If you go to Mt. Herzl, you will discover that the first death from “hostile acts” buried there is Rabbi Shlomo Zalman Tzoref, who was murdered 164 years ago. This means, from the perspective of the State of Israel, that the national struggle of the Jewish people did not begin 67 years ago with the establishment of the State of Israel. Nor did the murderous acts against Jews commence with the 1948 Declaration of Independence. Those acts were the consequence of hostility to the notion of the Jews returning to their ancient homeland and living there as a people.

Do not call them “terror victims,” do not say that Israel has a war on terror.

Israel has no war on terror. There was never a war on terror, and there never will be such a war. There is no such thing as “terror of stones,” just like there is no “terror by individuals,” no “car terror,” nor is Jerusalem “plagued by stone throwing.”

And similarly Eitam and Naama were not murdered by a passing car firing at them. These are all methods. Not enemies. Terror is a tool. The one who uses terror is the enemy. Terror is the enemy’s tactic, its weapons at hand. To say “We fight terror” is to say “We do not know who the enemy is; or we are not willing to define them as such.” In other words, “We have no strategy.”

Do not fight terror; fight those who dictate it. I don’t mean, God forbid, to call for acts of vengeance against innocent Arabs. I’m also not implying that we should give up on war ethics and laws of war. My intention is that we should not pretend that there is no hostility, hatred, ideology or agencies that manage terror. Nor should we pretend that there is no widespread support for terror. We should not forget that there is a religious and national conflict that has laid and continues to lay the foundation for terrorism.

We ourselves say, rightly, “We should not be like them.” Then why do we lie to ourselves and say that there are no “them,” that there is no enemy but only an abstract and faceless “terror?” If we are fighting “terror,” then who are those “them?”

Eitam and Naama were not killed by “terror.” They are victims of an act of hostility. It was hostility behind the murder. Human beings driven by hatred went out to the road in order to murder Jews, and they succeeded. They took my brother from me and from my siblings; from Yishai they took his sister Naama; from my parents and from Naama’s parents they took their children; from the children — Matan, Nitzan, Neta and Itamar — they took their parents, they took the right to grow up in a family, with the experiences and memories of a warm, unified, and loving family. They took from you, who stand here, a talented and optimistic couple, who were destined to greatness. And they continue to take from everyone the sense of security. They were Arab murderers, backed by a too-large segment of Arab society, with far too little principled opposition to murder. An enemy. An enemy who utilizes terror.

Do not degrade their memory by turning them into victims of a force of nature. Debate about policy, not about the murdered. Do not find justification and sympathy for murderers. Keep your empathy for the children who were left orphans, to the parents who were left bereft. And for the people of Israel, who still have a long way before being able to sit peacefully beneath their vines and fig trees.

There can be no compensation for our loss. It is a personal loss, an open hole that will never be filled. Most of you are not here because of it. You are here because, as the Babylonian Talmud says, “when permission is given to the destroyer to destroy, he does not distinguish between the righteous and the evil.” And how can he distinguish?

Eitam and Naama, few and good were the years of your life, but they did not reach those of your fathers in their homeland. Woe to a generation where parents are burying their children.

There is a verse from Isaiah that is customarily quoted in funerals: “He will swallow up death forever, and God will wipe away tears from all faces.” The conclusion of this verse is no less important, nationally and not just personally.