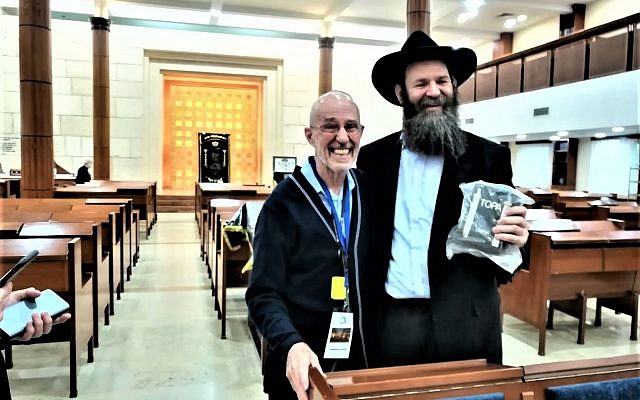 The author with a Chabad rabbi in Marina Roscha Synagogue. Courtesy

Rabbi Jonathan Porath recently returned from an educational tour of Russia with Keshet Russian Jewish Journeys where he acted as the tour group’s senior educator and scholar in residence.

This was his 175th visit to Russia since 1965. Here, he shares two particularly meaningful experiences from his trip.

A Siddur Makes Its Way Back Home

Under the Soviets, there were only a handful of synagogues in Moscow: the official state-monitored Choral Synagogue on Archipova Street (famous for Golda Meir’s visit in 1948 and Elie Wiesel’s reports in “Jews of Silence”) as well as two unmarked prayer rooms, more like shteiblach, in hidden-away corners of the city.

And now, on the first day of our trip this past July, we were sitting in the Marina Roscha Synagogue and Jewish Community Center, an impressive multi-storied building constructed by Chabad. This massive complex houses a synagogue, restaurants, gym, classrooms, a library and full auditorium.

Our host Rabbi Moti Weissberg was telling us the history of the current JCC building, and mentioned in passing that the previous modest structure had burnt down in a fire [“of-unknown-origin”] at the end of 1993.  Subsequently, Chabad decided to build the current magnificent facility in its place on the same spot.

With great emotion, I interrupted his presentation to tell the group that I had been in Moscow that very day of the fire some 25 years ago. Upon hearing the terrible news that December day, I went to the site of the still-smoldering ruins. Local firemen were sloshing around in the water with their hoses, the roof and walls had collapsed and the floor was strewn with damaged, destroyed and defiled holy books and papers. 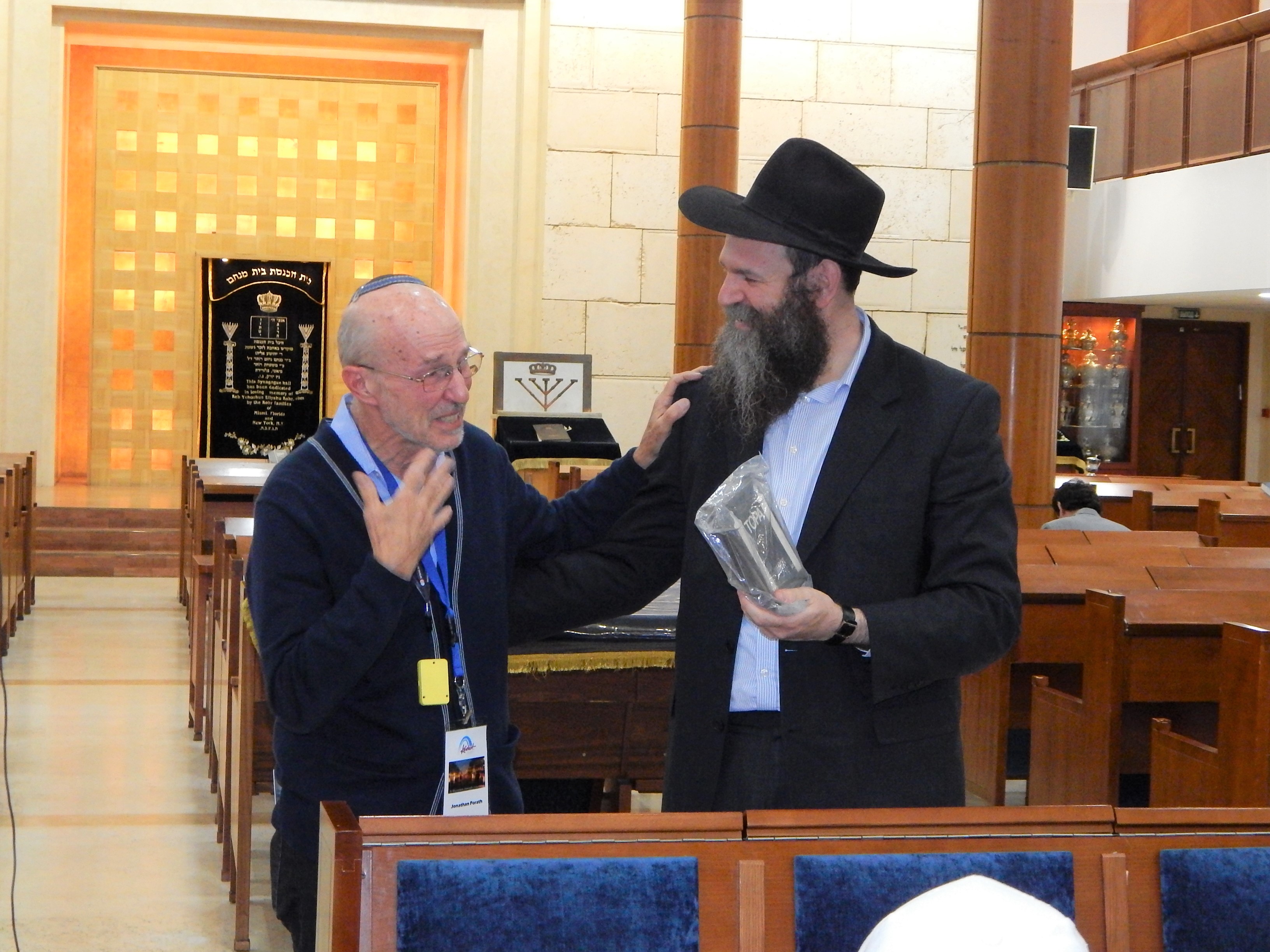 Realizing that all I saw would soon be dumped in the garbage, I bent over and picked up a water-logged, fire-damaged copy of the Torah, Sefer Shmot/Book of Exodus, and took it back home with me to Jerusalem where it sat for the next quarter century. Until…

And with that, I went to my backpack and pulled out that very same volume, and said to Rabbi Moti: “I have come to fulfill the Mitzvah of Hashavat Aveidah (returning a lost item). Twenty-five years ago, this holy book was nearly discarded in this very place, and today I have brought it back home to its original owners.”

Stunned and emotionally overwhelmed, we embraced each other.  Tears flowed — of shock, surprise, recognition, relief and great thanksgiving.

If such a damaged item with such deep spiritual significance could survive, so too could the spirit of the Jews of Russia.  Whether in Jerusalem or New York or Moscow, they were now able to reclaim their identity and heritage as Jews, symbolized by that worn chumash (bible) which had finally come back home.

From One Army To The Next

A few days later, we were hosted at YESOD, the St. Petersburg Jewish Community Home, constructed by the American Jewish Joint Distribution Committee [JDC] about a dozen years ago. It houses many communal cultural and educational projects.

Elena Eybshits, the local representative of JDC, was giving us a briefing. She opened by sharing her personal story.  “Our family was not very Jewishly involved. In fact, when I applied for the job to direct the local JDC office a few years ago, and was asked to which Jewish organization I belonged, I replied ‘To none—and it is an advantage!! No one can accuse me of being too parochial!’”

“My Jewish father, Vinyamin Moiseivich Eybshits, was a three-star Major General in the Soviet Army, and our son, his grandson, moved to Israel and served in the Israeli Army/Tzahal!”

Our eyes opened wide in astonishment as Elena recounted the story of the generations of her family. What she described about her father and son—one in the Soviet Army and the other in the Israeli Army—was never supposed to happen. Soviet Jews were destined, so we thought, to assimilate and disappear—not to suddenly and almost inexplicably assert their Jewish identity and actively reconnect with the Jewish people. 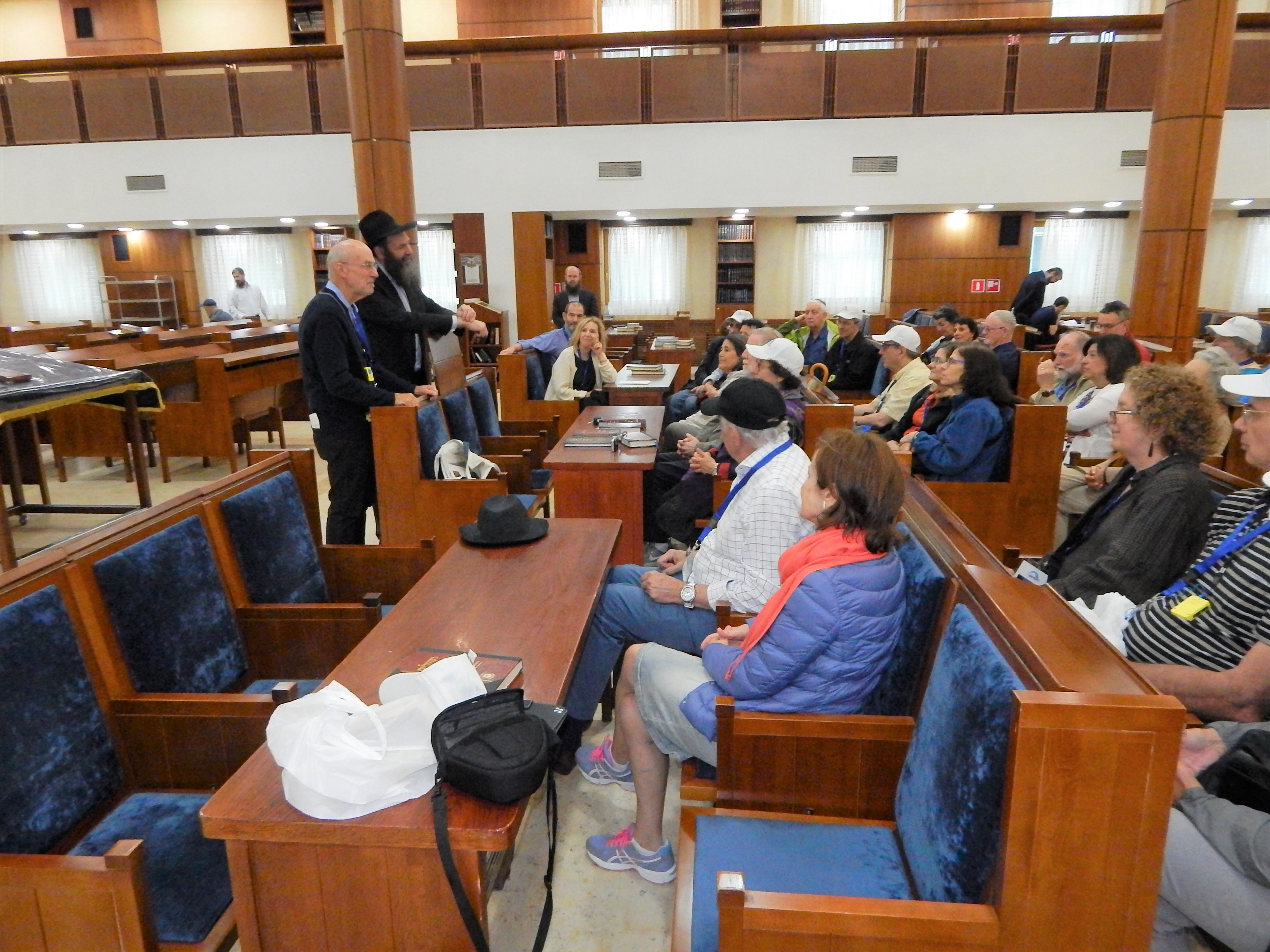 All of the Jews whom we met in Russia this past summer, those affiliated with Chabad or the Progressive movement or neither, founders of Hillel in Russia,  current and future leaders, academics and intellectuals, activists and welfare workers—all made a personal and deliberate choice to identify or re-identify with the Jewish community, and they did so proudly. We were humbled to be their witnesses and to stand in their presence.

We had come from the US, the UK and Israel to encourage them and give them strength; instead, wherever we went, to synagogues, Jewish museums and memorials, Kosher restaurants, JCC’s, Hillels and the like—we came away enriched, emboldened and inspired by their renewed Jewish spirit.

Rabbi Porath is returning to Moscow and St. Petersburg this summer on the Keshet Tour 2019 Russian Jewish Journey. It is kosher and Shabbat observant and runs from June 17-25, 2019. For information and registration click here.