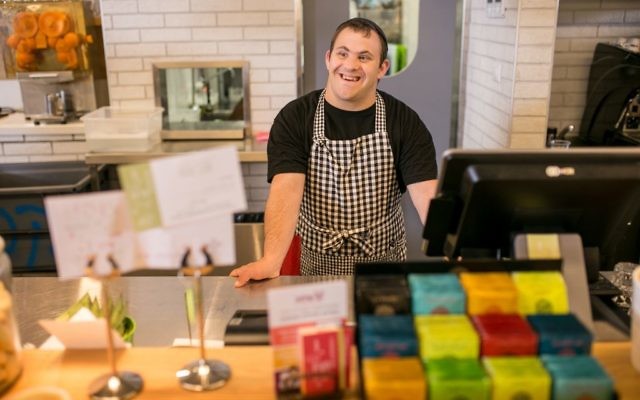 Ari* deliberates as he considers the half dozen glasses on the café table and slowly puts one, then two, then three on the black tray he’s holding. A bit wary, but also intent, you can almost hear him strategize: if he puts too many on the tray, it could fall scattering glass, and frankly, that would be a little scary. Take too few, though, and it will take a lot of trips to clear that table. Waiter Ari finally puts three glasses and two plates on the tray and takes it back to the kitchen. The table clearing mission has taken about six minutes, but even though the café is having a busy breakfast run, no one tells Ari to hurry. After all, he’s still in training. And doing such a good job.

Ari is one of several new waiters and waitresses at the posh new Café Shalva in Jerusalem. Launched in March the café is located in the newly opened National Center of Shalva, the Israel Association for the Care and Inclusion of Persons with Disabilities, which provides, free of charge, a wide range of services for children with disabilities and their families.

While Café Shalva, dairy and kosher, is run by the staff of Derech HaGefen, a legendary dairy kosher restaurant on a moshav outside of Jerusalem, the delicious food (that’s fresh whipped cream with those waffles; yes, they gladly refill the bowl of house-marinated olives) the enterprise really exists for Ari and the dozens of other young adult with developmental disabilities who will join him in the next few years to train as wait and kitchen staff. Shalva’s goal for these young apprentices is to propel them and dozens more after them, into careers in food enterprises. “In a few years, perhaps we’ll have a whole chain of Café Shalvas around the country,” says Kalman Samuels, who founded Shalva with his wife Malkie to share what they had learned in caring for their son, Yossi, now grown, who is deaf, blind and a well-known raconteur.

Employing young adults with disabilities in the food service industry isn’t new in Israel. A young man with Down’s syndrome for years washed windows and counters at the now departed Café Joe, near the King David Hotel. The Inbal hotel, also in Jerusalem, has long employed young adults with disabilities in its kitchen, as does the elegant Lillyot restaurant in Tel Aviv.   What makes the Shalva Café, and Café Harutzim in the Talpiot industrial section of Jerusalem different is that the goal of creating the opportunity for special young adults came first, and the food came second, though the menu is not the second thought in either café.

Shalva’s Kalman Samuels says the café provides much more than employment for people with developmental disabilities. It gives pride, self worth and purpose as well as what we all want from a joy, job satisfaction and camaraderie. Yossi, says Samuels, works just one day a week at a firm called Route 6, where Yossi assembles parts for the sensors people mount in their cars to pay highway tolls. “But ask Yossi about himself and he’ll proudly tell you “I work at Route 6.

Café Harutzim, located at the headquarters of Shekel, a Jerusalem based organization with the goal providing transformative care for individuals with disabilities, empowering their families and promoting social inclusion. The café, dairy, has been a dream of the organization both to be a base for training young adults with disabilities in food preparation and serving as well as to show café patrons that people with disabilities fit fairly seamlessly into every workplace. Look into the open kitchen and you’ll see an Arab young woman with learning disabilities who is a whiz at pizza making and look across to the outdoor patio, usually packed, and see a server who later that day will get help from a Shekel staff member on how to take the bus to and from work. 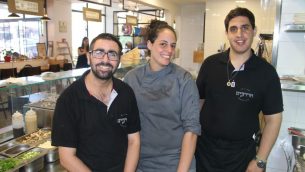 Nir Segal, who manages the Harutzim café, created a menu that is both healthy and delicious packed with vegetables and whole grains. My picks included an excellent pasta pesto and a really tasty sabich (eggplant, hard boiled egg) sandwich. With seven people with disabilities on his staff Segal grew frustrated that no local food businesses have yet employed his trainees and so he created those jobs himself: Café Harutzim has expanded to two school kiosks in Jerusalem which each include two young adults with disabilities and a Shekel supervisor.

Café Harutzim is located in the Talpiot industrial section of Jerusalem amid lighting fixture stores and several malls. Segal says that being in the thick of the business district brings walk in as well as fans which gives more people a chance to experience the café and its special staff. And because Café Harutzim is close to the German colony, an upper middle class residential area in Jerusalem, the café is typically packed for Friday breakfast when most people are off work. Café Shalva is near Shaare Tzedek Hospital and Har Herzl, Israel’s military cemetery and offers a view of its beautiful grounds including a playground built for inclusion which is open to the entire neighborhood, and child lunch guests. The café’s vibe is growing. Recently the entire board of an Israeli bank held its meeting there.

Both cafes recently celebrated a milestone: Yeah that’s Kosher, a well known kosher food website recently reviewed both eateries. Writes Dani Klein, the website’s author: “Jerusalem has added 2 new cafes to its long list of “not to miss” eateries.” Adds Klein: “Both cafes…invite you to be a part of a special social experience, helping to enhance the future for adults with special needs in the workplace while making the public more community focused.

Fran Kritz is a freelance writer based in Washington, DC who wrote a regular health column for the New York Jewish Week for a decade. Currently she is writing about healthcare topics for the Washington Post, NPR and Kaiser Health News.