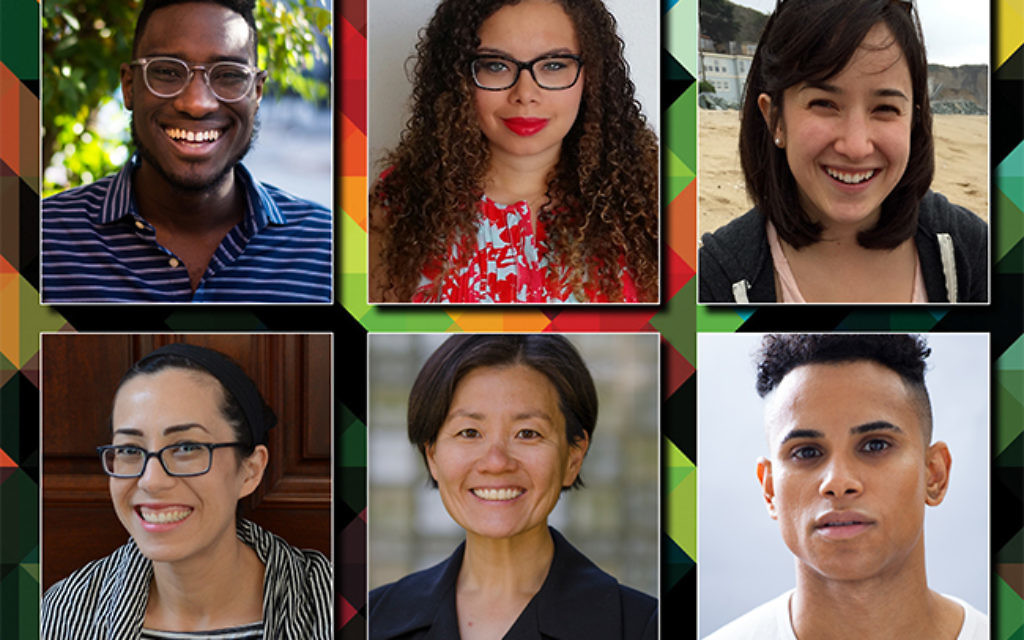 This is Part Two of a two part series on the changing face of the Jewish community. Read part one here.

When April Baskin became the Reform movement’s first ever vice president of “audacious hospitality,” she took a radical approach: Instead of trying to entice unaffiliated post-college Jews back into the fold, she focused on how Jews on the margins could help reinvigorate Judaism from the outside in.

Baskin, whose parents are both Jewish—her mother Ashkenazi and her father black and Native American—sees the question of engaging the next generation from several perspectives. The daughter of a Hebrew school teacher, she grew up in the center of her Northern California synagogue’s communal life. But, like so many Jews of color, she has often found herself having to prove her Jewish authenticity. She’s seen Jews of many nontraditional communities—interfaith, LGBT and Jews of color, to name just a few—seek leadership roles in Ashkenazi-dominated synagogues and also seen groups build vibrant communities of their own.

Through the narratives of the three Jews of color profiled in part one of this series, which we published last week, as well as the three we profile here, we see examples of Jews who want to engage. Young Jews who keep trying despite the sometimes well-intentioned-but-demoralizing questions, unintentional slights and experience of being exoticized because one doesn’t have the traditional Ashkenazi look.

Among Jews of color, Baskin said in a Jewish Week “36 Under 36” profile in May, she sees “a lot of excitement and desire to express their Judaism in the fullness of who they are.”

And as these young Jews forge a new image of Judaism, one that in the words of Genevieve Goldstone is a “hyper-diverse American Jewish culture,” they are bringing a welcome new energy to American Judaism, one that the rest of us should celebrate and could well emulate.

“We need to focus on where the energy is,” Baskin said, “to focus on the group that is interested in engaging.”

As a spirituality-seeking freshman at the University of California, Berkeley in the early 1990s, Genevieve Goldstone walked up to the Hillel on campus and took contact information from just about “every flier on the wall.”

“I was hungry for ways to add meaning to life,” said Goldstone, 40, today the mother of two living in San Diego.

But though she began learning about Judaism when she started college, becoming active at Hillel and eventually deciding to observe Shabbat and keep kosher, it wasn’t until her early 30s that she decided to complete a Conservative conversion. The daughter of a Portuguese mother and Japanese father who grew up “nominally Catholic,” she faced several negative experiences early on in the process that nearly turned her off to Judaism altogether.

“I was viewed with suspicion rather than welcoming,” said Goldstone, who began her conversion process in the Orthodox world. She described her first visit to the Orthodox rabbinical council of Los Angeles when she was 32. She was handed a 10-page questionnaire intended to evaluate her mental health and full of probing questions about her family and personal life.

“When I went in for my first interview, I felt so violated in a way, so demoralized,” she recalled. “I already considered myself part of the community, and they looked at me like a crazy person who is going to infect the population.”

In her 30s, Goldstone decided to revisit the conversion process through the Conservative community, where she found more openness.

Still, as a Jew of color, she has grown to anticipate judgment and questioning, even in more welcoming circles.

“People make comments to gauge if I’m Jewish or not, like, ‘What’s your maiden name?’ and, ‘What’s your mom’s name?’” she said. “The feeling of internally being on guard doesn’t go away for a long time.”

Using her own life as a point of departure, Goldstone, a doctoral student in sociocultural and psychological anthropology at UC, San Diego, probes the diverse experiences of Jews of color from an academic perspective. Her dissertation focuses on the increasing racial and ethnic diversity within the American Jewish community, with an emphasis on Asian, Latino and African-American converts.

“Today, the majority of Jews of color are coming to Judaism through their partners,” she said. “It’s a part of their loved one’s identity that they enjoy and that they want to share.”

In her own home, though Goldstone is married to an Ashkenazi-Israeli man, she is the “keeper of Jewish practice.” “We go to shul, keep kosher, and have primarily Jewish friends,” she said. “That’s what I want.”

Despite frequently feeling “othered” in Jewish spaces, her research leaves her feeling optimistic about the future of the American Jewish community. “I believe what is being formed is a new, hyper-diverse American Jewish culture,” she said. “In one synagogue, you’ll have Koreans, Columbians, African Americans — all in one shared space.”

Yehudah Webster – No Explanations, No Apologies

By the time he was 8, Yehudah Webster, the son of a Christian pastor, had moved 15 times.

“My father was always a man of the book, a man of faith,” said Webster, now 23. Although today he lives in the trendy Brooklyn neighborhood of Park Slope, he spent the bulk of his childhood on a farm in the South American coastal country of Guyana. The family lived simply, engrossed in the study of biblical texts and without “luxuries” like running water. “We always followed the basics in the Old Testament. But I didn’t believe we would end up Jewish.”

Fast-forward nearly two decades, and Webster is a particularly engaged Jewish millennial and a vocal advocate for Jews of color. At age 6, he followed his parents’ example and converted to Judaism. Today a founding member of the Jews of Color Caucus, a smaller body within the activist organization Jews for Racial and Economic Justice and an active member of the Jewish Multiracial Network, he feels that “decentralizing the Ashkenazi Jewish narrative” is essential to moving the Jewish community forward.

“Right now, Jews of color are largely exoticized,” said Webster. “People get overly excited about the fact that I’m a black Jew. ‘You must have a story — tell me your story!’ I happen to have a story, but you don’t get to ask me that in the context of just meeting me.”

When walking into Jewish spaces, particularly synagogues, he has grown accustomed to stares and unwanted questions.

“I’m very dark, and I’m accustomed to presenting as a black man,” said Webster, who describes himself as a post-denominational, traditional Jew. “But when I walk into a synagogue space, the need I feel to prove myself is distracting to the purpose of being there. All of the sudden, prayer becomes performative. I hate when that happens.”

When he used to wear a kipa consistently, the head covering, taken for granted in many observant circles, was constantly questioned. “Jews would challenge me all the time — they’d ask ‘is that the [current] style or are you really Jewish?’”

In addition to his volunteer roles, Webster works as a tutor for a company that helps Jewish students prepare for their bar and bat mitzvahs. He has yet to work with any Jews of color. “It’s exemplary of where we are in our society,” he said. “Change is not macro yet.”

Still, he remains optimistic. In recent years, he has noticed that many of his peers feel more comfortable “presenting as black” in the Jewish community without apologies or qualifications.

“This is how we move the dial,” he said. “Progress might be slow, but I believe things can change.”

Though conversations about race seem ubiquitous on college campuses today, Sophia Weinstock, a senior at Columbia University, prefers to take her activism off campus.

“I wanted to be more closely connected with the issue,” said Weinstock, who volunteers alongside her African-American grandmother at the NAACP branch in Harlem. “On campus, you’re too distant from it. You have a bunch of really eager students who know there’s an injustice going on, but how much are you doing about it? Are you with the community?” When she attends monthly NAACP meetings, she feels “with the people.”

On campus, getting involved in the conversation about race comes with strings attached, especially for pro-Israel Jewish students.

“At school, you have the issue that Jews aren’t always welcomed in social justice circles if you’re associated with Hillel,” she said.

Associating with Hillel “comes with certain connotations” — like being a Zionist — that are “unacceptable” among some left-wing student groups. Close student alliances, particularly between Black Lives Matter activists and Students for Justice in Palestine, make the political landscape increasingly difficult to navigate, she said.

Still, Weinstock has largely found acceptance among her African American peers in a way she has not in Jewish circles.

“Outside of Jewish circles you don’t have to prove anything,” she said, recalling how her position as president of the Jewish students club was never questioned at her public high school. “You just say ‘I’m Jewish’ and that’s why I can’t do this at this time, and people say ‘fine.’ I have never felt hurt or disrespected in the same way as in Jewish circles.”

The Jewish community would do well to adopt some of the practices used by the Black Lives Matter movement, she said.

Through years of receiving questions and comments, Weinstock has grown a tough skin. But when her younger siblings are subjected to the same, the pain becomes raw again.

She described a recent incident in which her younger sister — who is “not tough as nails like me” — was pulled out of class at her Jewish day school because the principal did not think the cornrows she wore in her hair “fit the image of his school.” She was not allowed to return to class until the braids were removed.

“She was so mocked for her hair in school,” said Weinstock. “Kids would say, ‘You have puffy hair! Why isn’t your hair straight?’”

“It all goes back to [the idea that] Jews are supposed to look a certain way,” said Weinstock, her voice catching in a way it had not when sharing her own story. “You can’t wear your hair in a way that’s best for you. You have to wear your hair like everyone else, the way everyone else in that circle does.”

This story was made possible by a grant from The Jewish Week Investigative Journalism Fund. Read Part One here.