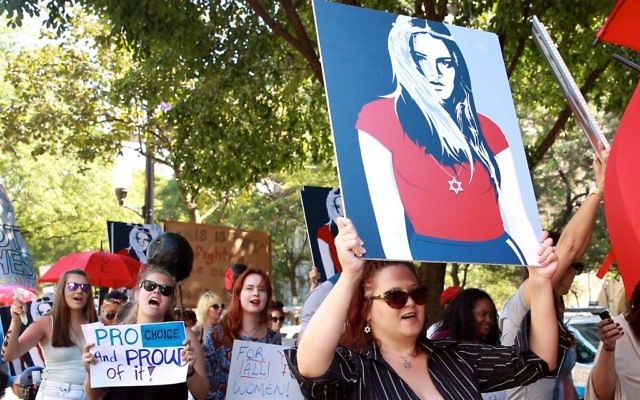 The Zioness Movement made its debut at SlutWalk Chicago on Saturday. Getty Images

They are (Jewish progressive) women, hear them roar.

The 1972 Helen Reddy song that became the anthem of feminism’s second wave could very well be the slogan of Zioness Movement, the new progressive group that made its official launch on Saturday at Slutwalk Chicago, part of a national effort to protest rape culture.

Despite significant harassment during the event, the Zionesses remain undeterred.

“What we’re asking for is to be included in important movements in the United States. We are asking not to be excluded,” Amanda Berman, a 30-something attorney who lives in New York City, told The Jewish Week. “We are true progressives, this is sincere for us,” she added. “It’s something that [Zionist] progressive women have been struggling with for a long time.” 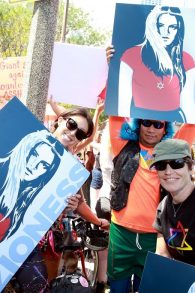 When Berman’s group arrived at the rally, she said, she and her group “were super friendly; we walked around, we made friends.” The group gave away several T-shirts — black with a rainbow colored Star of David — and posters — a woman wearing a countenance of courage and a Jewish star around her neck, drawn in the red-white-and-blue block style of Shepard Fairey’s Barack Obama “Hope” sign, and, more recently, his portrait of a Muslim woman wearing a hijab made from an American flag.

But the good feeling was fleeting.

“We were clearly unwelcome from the moment we got there,” Berman said. Once the rally started, she said, other protesters “chased us around the entire time with red umbrellas” trying to cover up the Zioness signs. 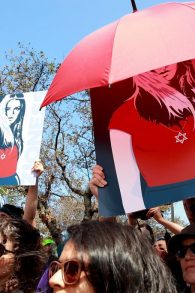 A protester tries to cover a Zioness Movement sign with a red umbrella, which marchers carried to symbolize solidarity with sex workers. Getty Images

“It was a beautiful day and we were standing up for social justice. … We chanted in solidarity. … We enjoyed being there and just wish we could have listened to the speakers,” she said.

Since the event, support has spiked, with likes for the Zioness Movement Facebook page jumping from under 400 over 1,000. People have been emailing asking to buy T-shirts and other Jewish groups have reached out to Berman to express support and invite Berman and her co-leaders to speak on panels at upcoming events.

Berman and about a dozen likeminded women launched the movement after organizers of the annual march against rape culture said publicly that people wearing Stars of David would not be “invited to participate.” 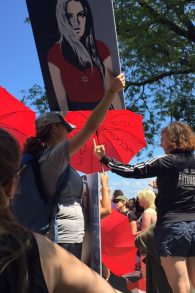 A protestor gives a Zioness Movement supporter the finger in a face-off that lasted a full minute. Courtesy of Zionest Movement

The statement came in the wake of a decision by organizers of the Chicago Dyke March to kick out three women who were holding a rainbow flags with Stars of David last month.

SlutWalk Chicago then reversed the decision, instead banning all nationalist symbols from the march — except for Palestinian flags, which they view as symbols of resistance.

“For too long, we have allowed certain individuals to advance the idea that intersectionality excludes Jews and Zionists,” said Zioness Movement co-founder Talia Shifron in a press release announcing the group.

The law student and human rights activist added: “Zionism is a movement for self-determination and civil rights, just like other movements who fight for these same causes, and it is time for us to join in solidarity to dismantle all forms of oppression.” 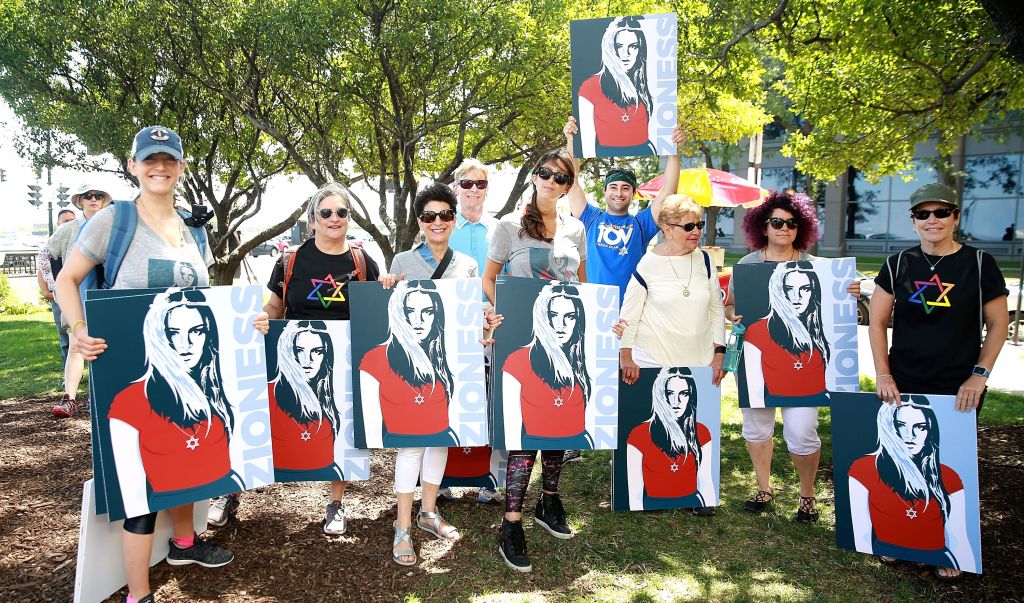