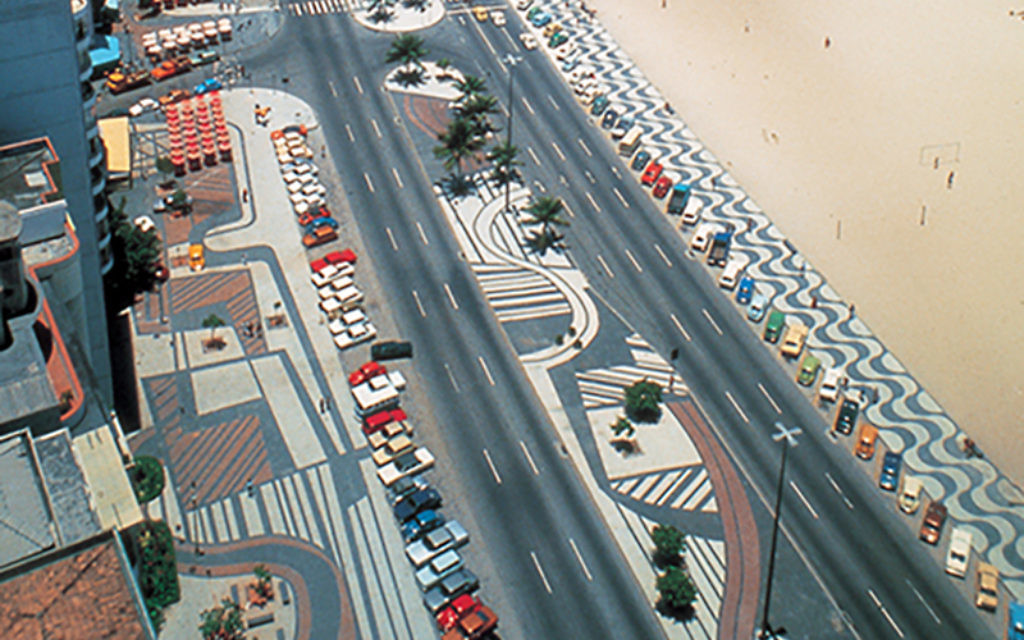 For much of his career, Roberto Burle Marx’s palette has been nature. One of the most prominent landscape architects of the 20th century, he designed more than 2,000 gardens over six decades.

Perhaps his most well-known project is his 1970 design for the pavement along the beach promenade in Rio de Janeiro’s Copacabana neighborhood, with its black-and-white-and-brown graphic design, following the curves of the sea.

His landscape design is as essential to Rio as Central Park is to New York City. Once you have walked and admired its contours, it’s hard to imagine appreciating the city without it.

He also designed the landscape and pavement for Miami’s Biscayne Boulevard, as well as rooftop gardens in Rio and many buildings and gardens in Brazil’s capital, Brasilia.

The Jewish Museum’s new exhibit, “Roberto Burle Marx: Brazilian Modernist” is the first exhibit in the U.S. to present his lifetime of work, including not only his landscape and urban designs, but his sculpture, paintings, ceramics, tapestries, jewelry, costume and set design and, toward the end of his life, designs for Jewish settings — all full of light, color, texture and patterns to be discovered. It’s challenging to show landscape design without actual greenery, but the curators have assembled garden sketches that look like abstract paintings, maquettes and photographs to represent the projects he designed and built, along with other commissions never brought to completion.

The exhibit is a great choice for a summer afternoon: You’ll encounter an artist you probably don’t know, whose work is radiant and deeply creative, showing respect and awe for God’s creation, as he presents it anew. Burle Marx’s gardens moved away from the French-inspired symmetry of most commissioned gardens to more energetic, forward-looking designs.

Working with plants and native grasses, an artist never knows how the garden will look as the plants grow into taller, fuller and more unpredictable forms. Burle Marx understood the passage of time and the cycles of flowers, when they might wither and when others come to life. He has said that in creating a garden, changing a single plant is like changing a word in a sentence.

Roberto Burle Marx (1909-1994), the self-described “poet of his own life,” was the son of a Jewish father who moved to Brazil from Germany and a Brazilian Catholic mother. His father, a leather merchant from Trier, the birthplace of Karl Marx (thought to be a distant cousin), first came to Brazil to look in on a factory, and fell in love with a young woman from whom he took piano lessons.

Burle Marx grew up in a cosmopolitan home where pianists Arthur Rubinstein and Claudio Arrau were regular guests. The exhibition opens with portraits he painted of his parents Wilhelm Marx and Cecilia Burle, along with a 1929 self-portrait and a portrait of his governess Ana Piascek, with whom he was close until her death at age 103 in 1978. It was Piascek who taught him to cultivate seeds.

Roberto’s brother Walter Burle Marx, a pianist, conductor and composer, founded the Philharmonic of Rio in 1931. Two years later he was forced to disband it due to lack of financial support and also, as explained in a footnote to the handsome exhibition catalogue, “Roberto Burle Marx: Brazilian Modern” (Yale University Press/The Jewish Museum), due to criticism for his European training and racism toward those of Jewish ancestry.

Their father, Wilhelm Marx, remained connected to Germany, only taking Brazilian citizenship in 1935, almost 40 years after he arrived in Brazil, and after the passage of the Nuremberg Laws taking away German citizenship from Jews. Roberto visited Germany in 1947 in search of surviving relatives, but found none.

On an earlier trip to Berlin, in 1928, Burle Marx visited the city’s botanical garden, and for the first time noticed Brazilian plants, like water lilies, and also came into contact with modernism. This trip was his inspiration for becoming a landscape architect. Since then, he discovered almost 50 species, 30 of which are now named for him.

Early on in his career, he received some modest commissions connected to the Jewish community in Sao Paolo, like a 1956 design for a gardent surrounding the home of Emma Klabin, a member of a prominent Jewish family, and landscaping for the Hebraica, a Jewish complex, including sports, social and cultural facilities. He later did a lot of work for the Safra family and Banco Safra.

He designed a garden for Hebrew University’s Mount Scopus campus, “The Garden of the Tree of Life,” overlooking the Old City, in collaboration with Brazilian Jewish artist Sulamita Mareines and her son, architect Ivo Mareines. This was imagined as a place of contemplation, “whose paths would all lead to spaces of peace, meditation and encounter,” as explained in the exhibit’s catalog by curator Claudia J. Nahson, in an essay, “A Tree in Search of its Roots.” The design concept was based on the kabbalists’ notion of the 10 sefirot, or emanations, that are traditionally illustrated by a tree.

Access to the garden was to be by paths lined with cypresses and evergreens, native to the Israeli hills, with reflecting water pools, and semi-circular walls covered with Portuguese tile, with a lit flame at the center of the area. Burle Marx never traveled to Jerusalem for the project, but worked closely with the Brazilian-born architect, David Reznik, who designed the campus. Unfortunately, the project was never built.

In 1994, he completed a set of relief-sculpture panels for a synagogue in Barra da Tijuaca, just outside of Rio — a synagogue named for its longtime leader, Rabbi Nilton Bonder, who graduated from JTS and has written several bestselling books. Burle Marx’s abstract decorations, drawn rather than sculpted like his other work, represent Hebrew letters — as though in a mystical language — and the sefirot. The inlaid floor has the tree of life design, and the ark and reader’s table are placed specifically within the design, as he came to understand sacred space.

Burle Marx was asked by the German government to design a public space in 1993. He selected a site in a plaza once at the center of the Jewish community; his proposal was rejected. Nahson suggests that at the end of his life, he turned inward, exploring his own roots.

“The fact that the artist worked on five sites steeped in Jewish meaning almost simultaneously between 1991 and 1994 speaks to his late interest in his own Jewish identity, and perhaps to a certain need to leave a personal mark in the world at the end of his life.” She points out that these projects, designed to honor his father’s heritage, are more intimate than earlier projects like the Copacabana pavements.

An associate for more than 20 years, Haruyoshi Ono, described Burle Marx as a man having a sense of humor, fine tastes, with great concerns for the environment, who truly enjoyed bringing people together. “For him, God was the energy that propelled everything,” Ono said.

The exhibition is presented with a soundscape by Arto Lindsay, a composer who lives in New York and Rio, with acoustic, recorded and electronic nature sounds, composed in response to Burle Marx’s work.

On an afternoon last month, I met Martie Moss, another museum visitor, near the display of Burle Marx’s jewelry designs, and she was wearing a ring that she bought from the artist during a visit to Rio in the ’70s. She met him while exploring the city and hadn’t heard of him then, but was enchanted by the man and his designs. Her ring, with its watermelon tourmaline stone, set in a sculptural goal setting, looked very similar to those in the cases. When she bought it, he told her to enjoy it, and she has.

“Roberto Burle Marx: Brazilian Modernist” is on view at The Jewish Museum, 1109 Fifth Ave. at 92nd Street, through Sept. 18. thejewishmuseum.org.