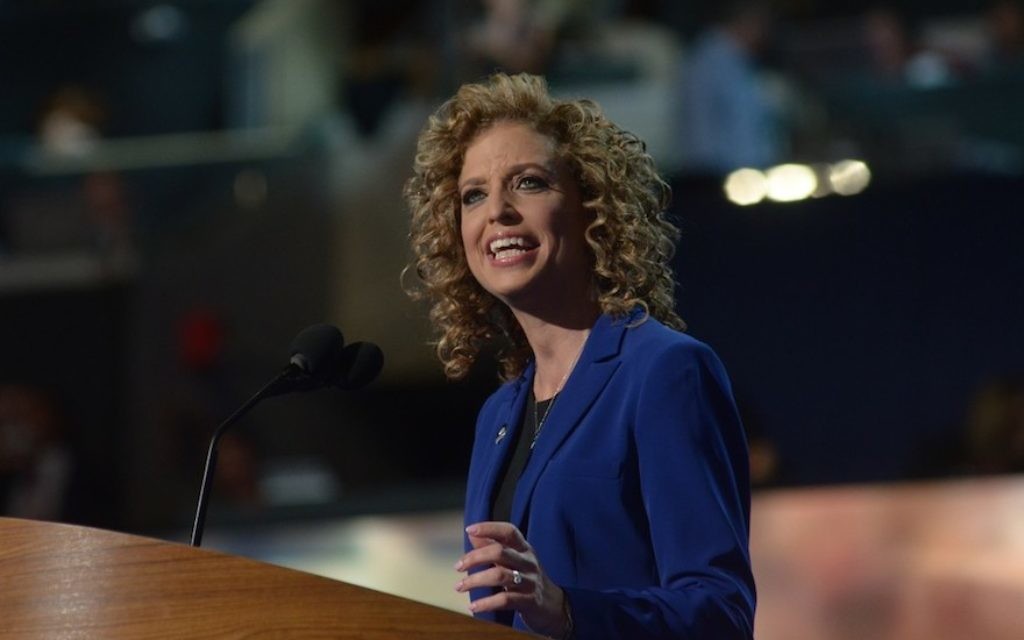 Washington — Feeling the heat over her clashes with Bernie Sanders, Debbie Wasserman Schultz is at the center of a debate among Democratic lawmakers over whether to push for her ouster as party chair.

The Hill reported Tuesday that about 12 senators have been discussing what to do about Wasserman Schultz, a Florida congresswoman and one of the most prominent Jewish members of the party.

The senators, none of whom spoke for quotation, said Wasserman Schultz’s clashes with Sen. Sanders, I-Vt., in his bid to defeat Hillary Clinton, the front-runner in the race for the Democratic presidential nomination, could lead to tensions at this summer’s convention. They worry that could distract from the effort to defeat the likely Republican nominee, Donald Trump.

Wasserman Schultz has also lost the support of liberal groups that support Sanders, including Credo, Moveon.org and RootsAction.

In the same article, however, a raft of Democratic senators went on record to reject talk of ousting Wasserman Schultz as chairwoman of the Democratic National Committee, a post she’s held since 2011. Her defenders included Barbara Mikulski of Maryland, Tim Kaine of Virginia, Kirsten Gillibrand of New York, Bill Nelson of Florida and Jeanne Shaheen of New Hampshire, as well as House minority leader Rep. Nancy Pelosi, D-Calif.

Sanders and his team have accused Wasserman Schultz of “rigging” the nomination process to favor Clinton, with whom she is close. Sanders has endorsed a primary challenger to Wasserman Schultz in her district.

Wasserman Schultz, who says she remains neutral between Clinton and Sanders, has adamantly denied charges of bias. She notes that the primary and caucus rules are a matter for the states and that the national party rules were in place before Sanders declared his candidacy. The DNC has added debates at the behest of Sanders, who said the initial schedule prevented him from getting national exposure.

One concession Wasserman Schultz has made to Sanders was to ask him to name five members to the 15-member committee drafting the party platform. DNC chairs usually name the lion’s share of the committee, but Wasserman Schultz, in an apparent peace offering, allocated five names to Sanders, six to Clinton and four for herself.

Luis Miranda, the DNC spokesman, pointedly noted to The Hill that Wasserman Schultz’s defenders were ready to go on the record while her critics remained anonymous. He said Wasserman Schultz wasn’t going anywhere. “She’s going to continue to focus on uniting Democrats and on being an asset to help elect them up and down the ballot in November, just as she’s done for many in both chambers,” he said.

One former DNC official said Wasserman Schultz is being blamed for campaign woes not of her making.

“Chairwoman Wasserman Schultz is an easy scapegoat for each campaign who has complaints about how their own campaigns are being run or the traction that they’re not getting,” Holly Shulman, a former DNC spokeswoman, told The Hill.

Sanders’ appointees to the platform committee, meanwhile, have drawn scrutiny from the pro-Israel community for their past criticism of Israel.

In an interview with Foreign Policy, one of the Sanders appointees, James Zogby, the president of the Arab American Institute, said the Middle East would be on the agenda, and said he hoped to modify language that has until now been overwhelmingly pro-Israel to recognize Palestinian suffering. One change, he said, would be to explicitly describe Israel’s control in the West Bank as an “occupation.”