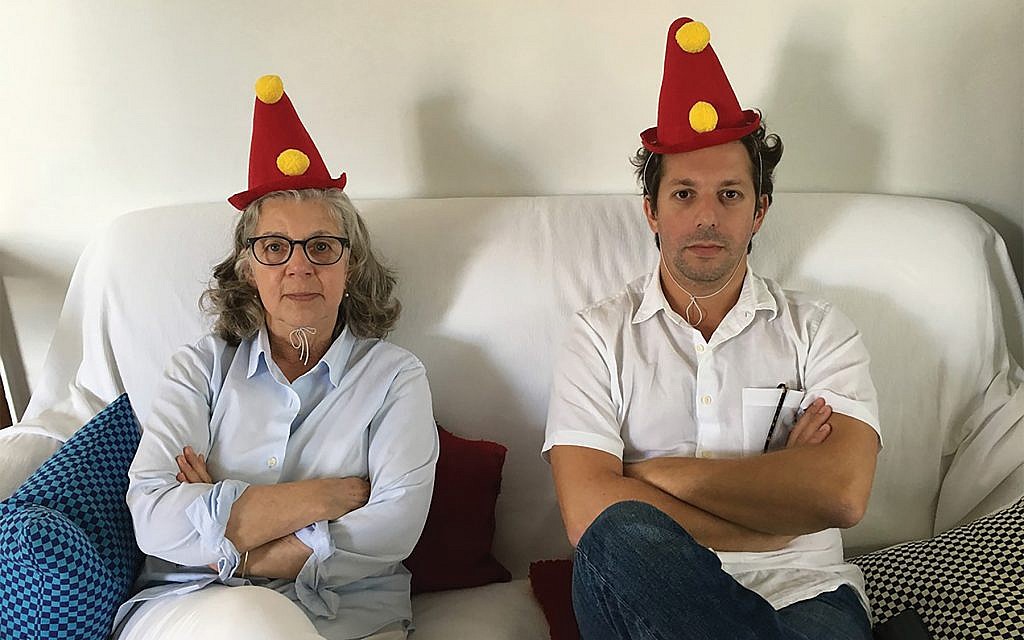 Maira Kalman and Alex Kalman, mother and son, understand the wonder of a Lemon Ice on the beach in Tel Aviv, held up toward the sun.

Their new book, “Sara Berman’s Closet” (Harper) is an illustrated biography of Maira’s mother, a kind of love story, an adventure of building a meaningful life. The paintings and collages of words, photos and objects are colorful and playful in a style that’s folkloric and modern, like the image of the silent grandfather who threw his six-foot-long beard into the River Sluch in their village in Belarus to save Sara when she fell into the water. And later there’s a dancing Fred Astaire, in all white — Sara was wild about him.

Sara Berman was one of seven children, and the family moved from Belarus to then Palestine when she was 12. They lived in a sand-covered shack in Tel Aviv, where the women continued to clean, bake, iron and cook as they had done before. Sara always dressed elegantly in outfits her mother made, having copied them  from European fashion magazines. There are photos of young Sara on the beach and in the city; she was, in her daughter and grandson’s words, courageous, ravishing and funny, and everyone was in love with her. She marries, has two daughters, moves to New York in 1954, and then moves back to Tel Aviv with her husband when the girls go to college. Then the marriage falls apart. At the age of 60, Sara leaves her husband and moves back to New York, carrying one suitcase. She literally cuts her husband out of her life, even excising him from photographs. Without her possessions, with time that is her own, she finds herself. 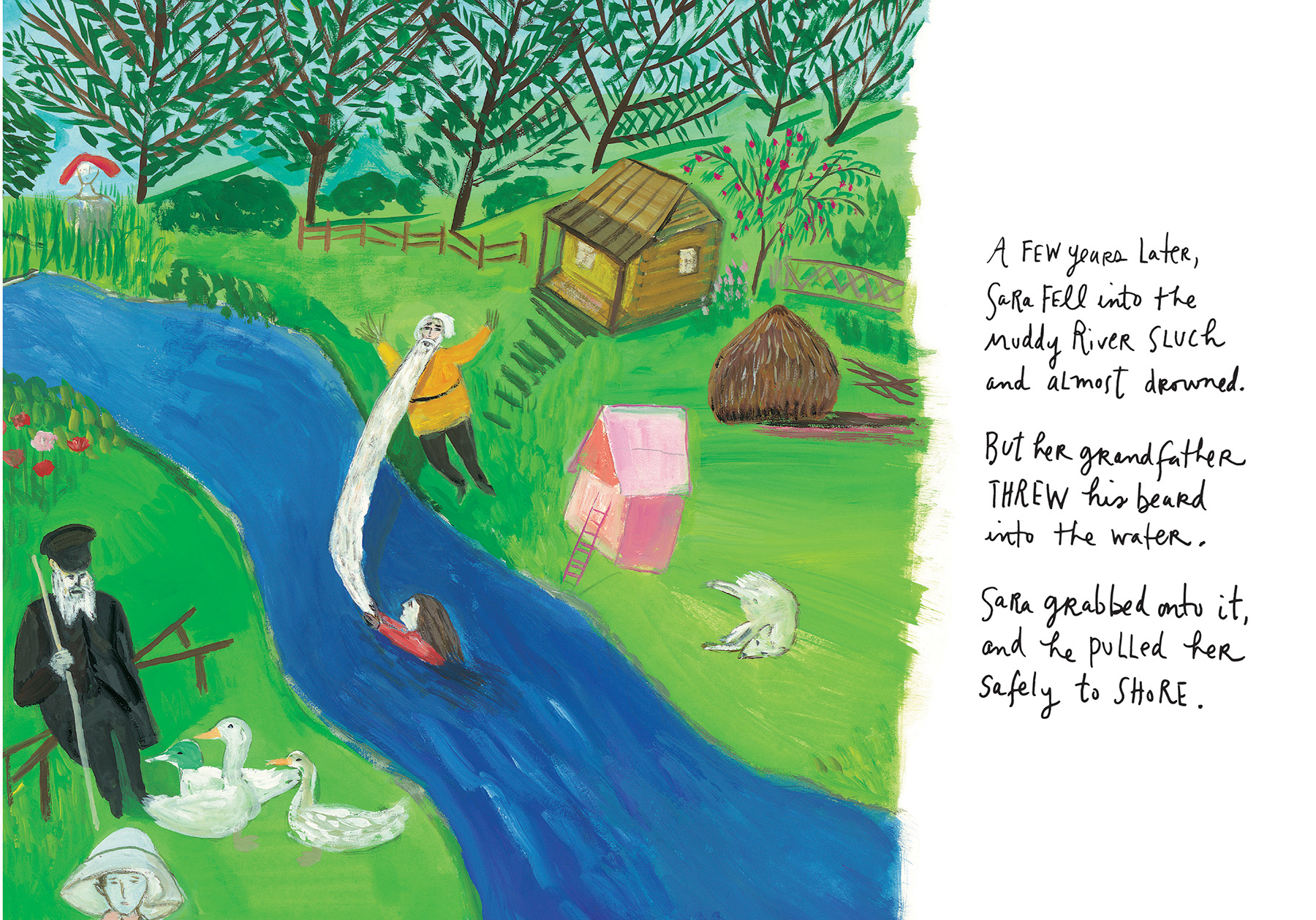 The closet of the title is the small space in her Greenwich Village apartment, where she kept all her clothing — she wore only white — folded perfectly into piles; each ironed sock resting flatly on the one underneath it. There’s beauty, elegance and creativity in all this order, as if it had been designed by an origami master.

“There was a place for everything,” the Kalmans write. “And everything was in its place.”

This closet is poetry, its vocabulary linens and white shirts. When Sara died in 2004 at the age of 84, Maira and her sister decided to preserve it, understanding that there was a larger message in Sara’s arrangement of her life and her belongings. 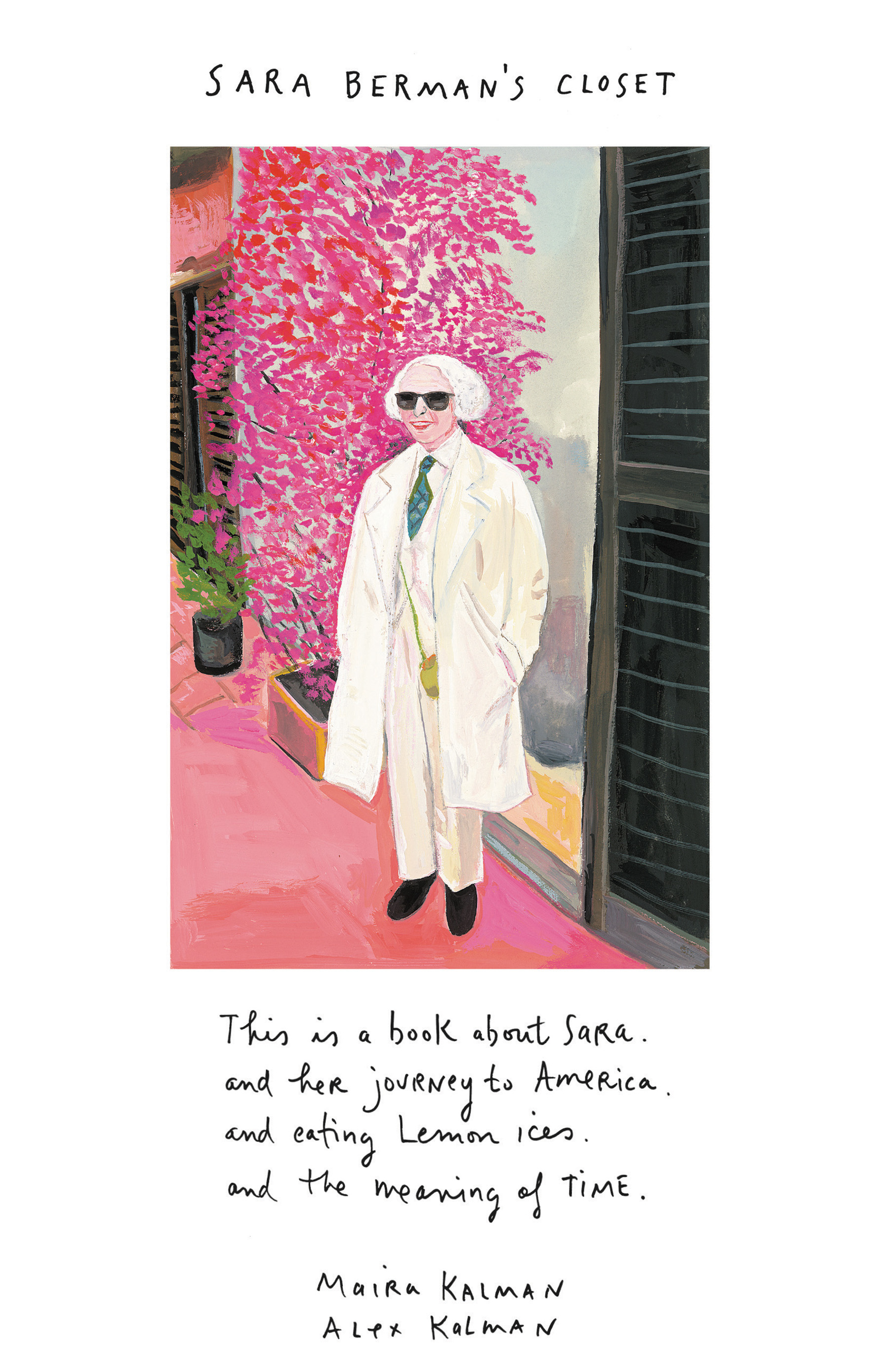 We meet in Maira’s Greenwich Village apartment, the home of a self-described collection artist. Vintage hats are arranged on top of the piano, a row of colorful miniature chairs lines a shelf; nearby are precisely placed tea glasses, curated pieces of wood and leaves, framed black-and-white photographs and a white curvy Eames La Chaise chair. She brings out a stainless-steel setting of fork, knife and spoon that belonged to David Ben-Gurion (Sara Berman would have polished them) and a small vial of water she brought back from the River Sluch in Belarus (she visited a few years ago with cousins).

Mother and son finish each other’s sentences. They are less master and disciple than partners in their ways of carefully observing the world, seeing the intricacies, joy and beauty of objects — in nature, on the street, in people.

Also part of this close-family constellation is Alex’s sister Lulu, who lives in Vermont and is a chef and culinary producer. Maira’s husband, the influential designer Tibor Kalman with whom she collaborated for many years, died in 1999. Among many projects, Maira and Alex are now working on a film about him. 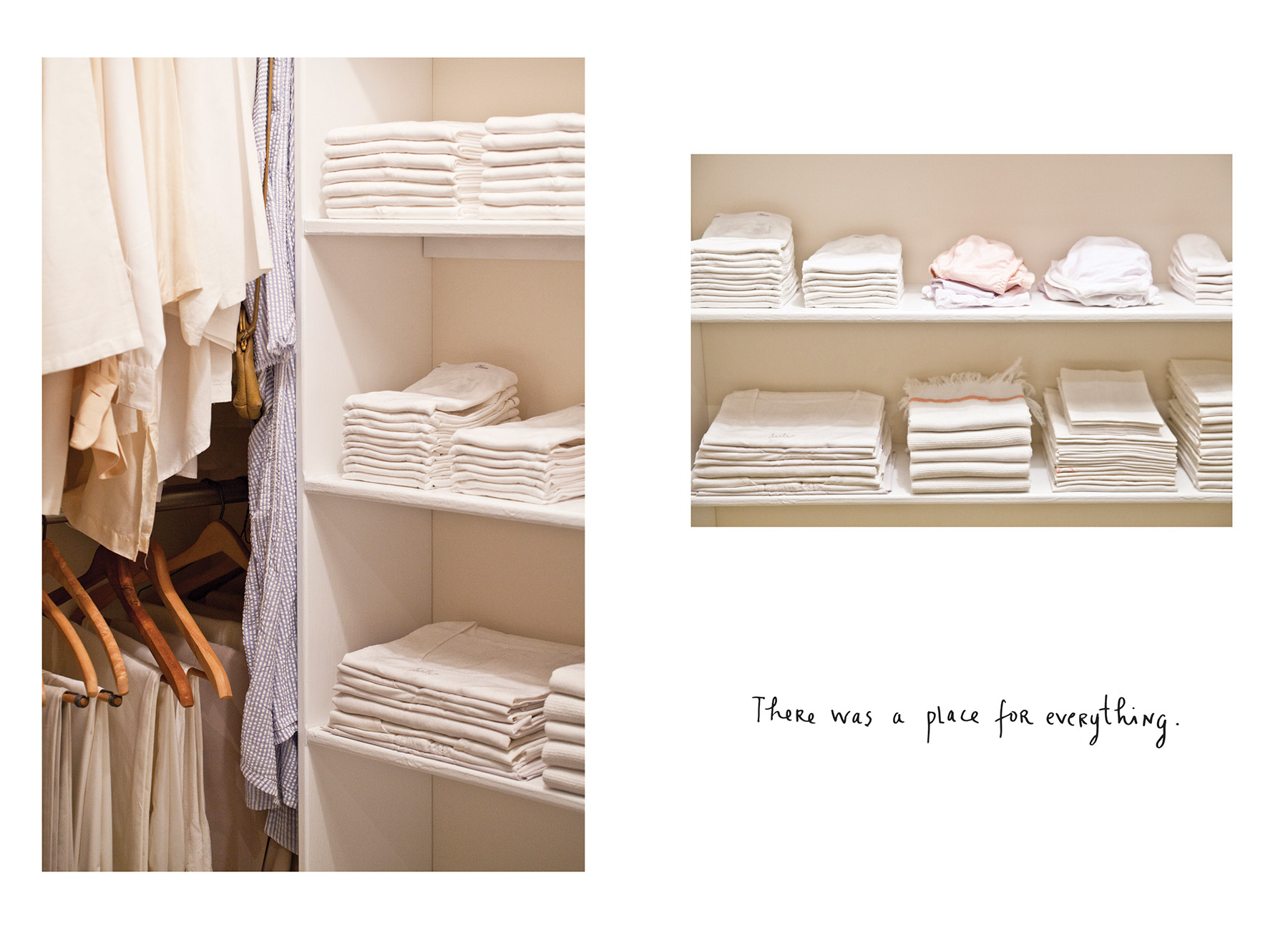 Born in Tel Aviv, Maira says that as a child she had a richly introspective life, spending a lot of time daydreaming, which she says is an “uncensored exploration of ideas and emotion — and amazing ideas come out of that.” These days, she likes telling stories in episodic ways, using text and pictures, and the writing in her books is often done by hand. She gravitates to what’s funny.

She has published close to 30 books; most recently she illustrated a children’s book with New York Sen. Kirsten Gillibrand, “Bold and Brave: Ten Heroes Who Won Women the Right to Vote.” A frequent contributor to The New Yorker, she is known for her 2001 collaboration with Rick Meyerowitz on the “New Yorkistan” cover. 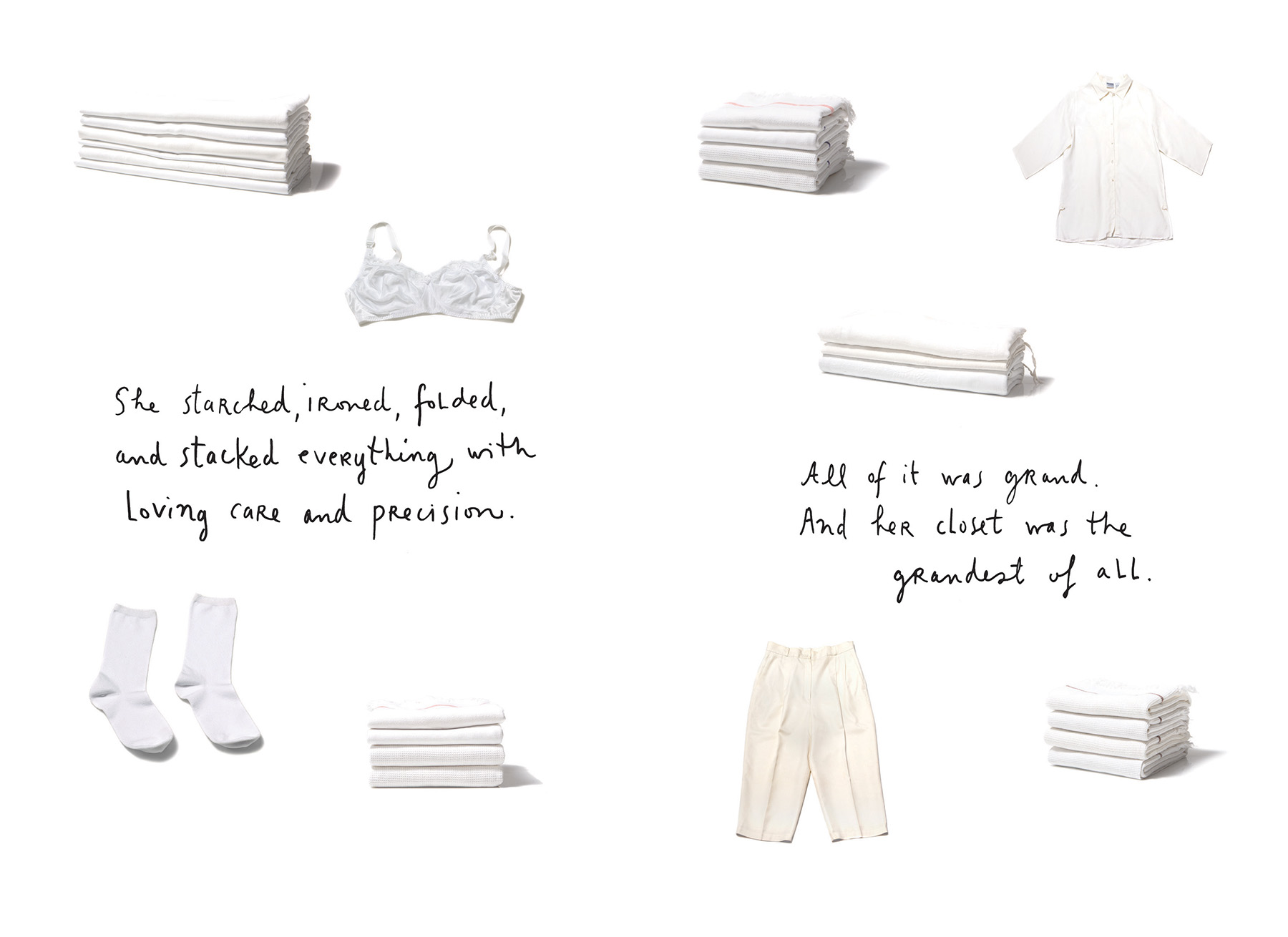 Alex says that growing up as the son of Maira and Tibor, he was aware that their home was different — they’d make projects together, jump around and speak a shared language; it was clear that “work rolled into our personal lives — and how compelling it all was.”

Both Maira and Alex are lovers of New York and draw much from the city’s energy. Alex explains that they use memory as a springboard for ideas, but that they work with a sense of going forward. “This project is to let go of memories, share them generously and look at the larger threads.”

Order and beauty are an antidote to chaos and suffering for Maira and Alex. Both express strong connections to Judaism and to Israel, though they are decidedly not religious. They seem to live, as Sara Berman did, in accord with Rabbi Abraham Joshua Heschel’s dictum, “And above all, remember that the meaning of life is to live life as it if were a work of art.”

Their own rule for life: “Love the people you love. Do the work you need to do. Don’t give up.”

Last month, the two spoke together at The Jewish Museum and, with New Yorker writer Judith Thurman, at the Rubin Museum. At The Jewish Museum, they were seated in front of the mural Maira was commissioned to create at Russ and Daughters Café, “In This Life, There Was Very Much,” with line-drawn images of cats, fish, couples, waiters, musicians, a woman in a babushka and others.

The museum recently announced its joint acquisition, with The New York Public Library, of a series of Maira’s paintings for a 2005 edition of William Strunk Jr. and E.B. White’s “The Elements of Style.” In her smart, funny and serious style, she illustrated their grammatical rules. This was The Jewish Museum’s first joint acquisition.

The exhibition “Sara Berman’s Closet” first opened at Mmuseumm on Cortlandt Alley, New York’s most compact museum, co-founded by Alex in Lower Manhattan. The space used to be the bottom of a freight elevator in a paper warehouse. The alley dates back to the 1820s, and Maira would sweep the street during the show’s run.

Mmuseumm is dedicated to “storytelling about the natural world” through what seem like cabinets of deep curiosity, with rows of objects lined up on shelves. In an even smaller space a few doors down, the Mmuseumm shop sells books, objects, espresso and ice pops. (Mmuseumm closed for the season last weekend.)

In 2016, the exhibition moved from Mmuseumm to the Metropolitan Museum of Art, where “guards were watching over Sara’s bras.”

“Sara Berman’s Closet” opened last week s at the Skirball Cultural Center in Los Angeles. This spring it will be on view outside, across from Independence Mall in Philadelphia. Yes, Sara Berman’s precisely folded belongings will be in a free-standing structure near monuments to the country’s founding fathers, while a larger exhibition about the background of the project will be on view inside the National Museum of American Jewish History. As it travels, “Sara Berman’s Closet” adds to the public conversation about immigration, starting over, finding meaning.