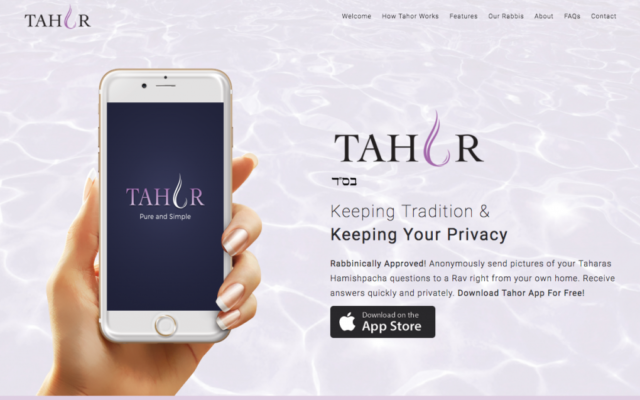 A new app that allows women to anonymously consult with a rabbi as to whether or not she is able to resume having sex with her husband following her period has caused a fury of online rabbinical debate since it launched Tuesday night.

The Orthodox laws of family purity require that a woman use a white piece of fabric, called a bedikah cloth, to check her vagina for blood from the uterus seven days after her period ends. In cases where a woman is unsure what a stain is from, she can bring the cloth to a rabbi to make the call, an experience that most people would prefer to avoid.

Called Tahor (pure), the app allows women to take a picture of the cloth and anonymously send it to a rabbi for determination.

“I’m hoping this app will provide the dignity and anonymity to women who want to adhere to their religious beliefs but are burdened by the embarrassment that accompanies this practice,” said Zisa Levin, a recently married social worker who developed the app with her husband, Yitz and MIT computer science graduate Rivkah Bloom, after facing such embarrassment herself.

In an interview with The Jewish Week, Levin said that not only will that app allow women to avoid embarrassment, but it will also encourage them to offer the rabbi more information than they might if they were consulting with their own rabbi, such as letting him know that she has hemorrhoids, for example. 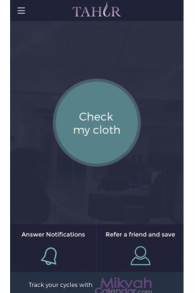 Although the app was approved by more than 30 rabbis before its launch, according to Levin, as soon as it hit the iTunes app store, rabbis began forbidding its use. Chabad Rabbi Fishel Jacobs, considered an expert in the laws of family purity, was initially one of the certifying halachic authorities for the app, but rescinded it on Thursday after a series of rabbis condemned it, according to the Crown Heights website Collive.com. Since he withdrew his approval, the choices of rabbis dropped from three — Ashkenazi, Sephardic and Chabad, to just Ashkenazi and Sephardic.

Rabbi Gedalia Oberlander of Monsey issued a statement calling on the Levins “to stop marketing this product immediately, even though their intentions are for the good and for the sake of Heaven,” according to Collive.com. He and other rabbis against the app say that specific lighting is required in order to be able to tell if the cloth represents impurity or something else and they don’t believe that a photograph will suffice. 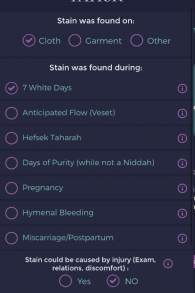 Levin said that many rabbis already allow people to text pictures of their bedikah cloths directly to rabbis, and this app was designed to make sure they’re sending quality photos as well as offering them the comfort of anonymity.

Levin also said that she believes this app might actually help some women who experience what she called “halachic infertility.” In cases where women live far away from their rabbi, it can take days to get the bedikah cloth to the rabbi and receive a response, which could result in her missing her window of ovulation.

Levin says that she still has more than 30 rabbis who have given their seal of approval to the app, but most of them aren’t willing to come out publicly. Currently, the app lists Rabbi Kenneth Auman, former president of the Rabbinical Council of America, and Rabbi E. Davis, senior Rabbi of Young Israel in Hollywood, Fla. 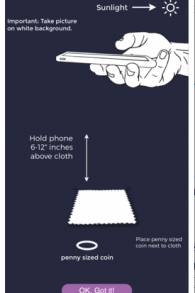 “Taking a cloth and showing it to a rabbi is often a difficult thing for a couple to do, for whatever reasons, justified or not,” Rabbi Auman told The Jewish Week. “This app cannot substitute for bringing an actual cloth or garment to a rabbi, however, many times rabbis get questions that are relatively easy to decide, and I think the app will be very helpful to those clear-cut questions. And it will also let women get used to this process of consulting this rabbi in a nonthreatening way.”

“This is just a way that, if someone’s not doing it because they’re uncomfortable with it, how great is it that they can do it without this seemingly uncomfortable obstacle?”

The app is available in the iTunes app store. It’s free but charges $3.99 to send a photo to a rabbi. As of Thursday afternoon, two days after its launch, nearly 600 people have downloaded the app.