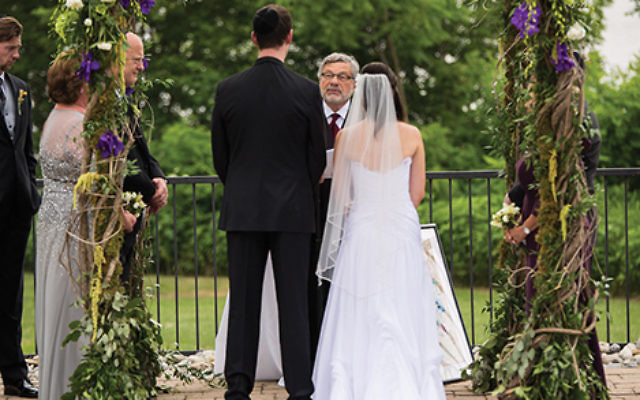 Conservative Rabbi Seymour Rosenbloom officiating at the wedding of his stepdaughter and her fiancé in 2014. He was expelled from the movement for his act. Courtesy of Stefanie Fox via JTA

For a microcosm of the varying approaches to intermarriage as it continues to increase, consider the family of Amichai Lau-Lavie, the Lab/Shul rabbi who plans to resign from the Rabbinical Assembly of the Conservative movement so he can officiate at marriages between Jews and non-Jews.

Rabbi Lau-Lavie’s first cousin, David Lau, is the Ashkenazi chief rabbi of Israel, overseeing a rabbinate that has raised the barrier between Orthodox Jews and the rest of Israeli society to protect those who preserve a Torah way of life. As a result, many Israelis feel increasingly distant from their Judaism, viewing it as fundamentalist and closed.

Somewhere in the middle of the two cousins’ diametrically opposed positions is Rabbi Binyamin (Benny) Lau, Amichai’s older brother. He is a leading voice of Modern Orthodoxy in Jerusalem whose more liberal views, like accepting women clergy and being lenient on conversion, have made him a source of controversy as well.

“History has shown that freedom of religion results in increasing assimilation with each new generation.”

But the hopeful note here is that these rabbis are family, and still engage with each other, despite their differences. Surely there is a message here for the extended family we call the Jewish people.

For those of us living in America, perhaps the greatest threats to Jewish continuity are also the greatest gifts this country has to offer: democracy and pluralism. History has shown that freedom of religion results in increasing assimilation with each new generation. The Reform movement’s response, in asserting that fighting assimilation is like opposing gravity, is to deal with the reality through “audacious hospitality,” welcoming non-Jews into the tent. But traditionalists worry about the thickness of such a Jewish community, and whether it can retain a commitment to mitzvot.

While the Orthodox community moves rightward, holding firm against intermarriage, the Conservative movement has been buffeted by competing impulses — to welcome intermarried couples and promote conversion, and also to promote in-marriage, with rabbis officiating only when Jew marries Jew.

“Perhaps the greatest threats to Jewish continuity are also the greatest gifts this country has to offer: democracy and pluralism.”

Sociologist Steven M. Cohen acknowledges the inherent mixed message here, but suggest both principles are important to endorse. It’s just that we can’t expect the same rabbis to convey both. So some will bring newcomers into the circle, and others will protect those already inside.

There are no easy or unifying messages in confronting assimilation. Perhaps it will be our diversity — the two-Jews-three-opinions version — that will keep us together, unless we allow it to drive us apart. The trick is to think of ourselves, with all our differences, as family, and try to keep it that way.