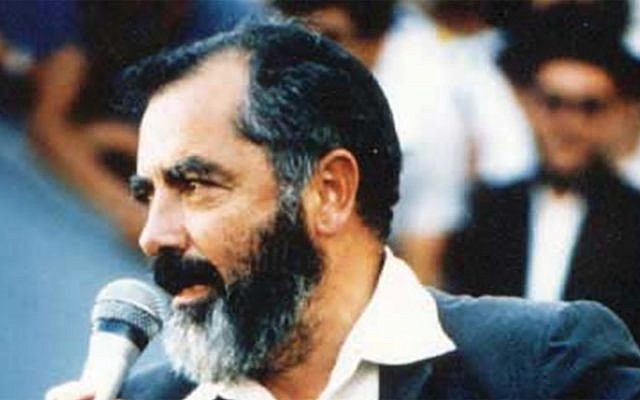 A few days following the death of Rabbi Meir Kahane, brought down by bullets after giving a talk in a Manhattan ballroom in the autumn of 1990, I was in Israel and made a shiva call to his wife and son. Kahane once did me a favor and I owed him one. A verbal arsonist, he left the world violently. Some people thought he had it coming. In fact, it was more complicated than that. The killer turned out to be El Sayyid Nosair, an Egyptian-born al Qaeda hit man, later convicted for his part in the 1993 bombing of the World Trade Center. Kahane likely was the first New Yorker killed by Osama bin Laden’s al Qaeda.

I entered Kahane’s home without knocking, shiva calls being what they are. He lived like a student in a small, sparsely furnished apartment. I was the only visitor at the time. On the parlor wall, a framed verse from Psalms, “Or zarua …” (“Light is sown for the righteous, and joy for the upright heart”) hung from a nail. Jewish custom treats dead rogues as if they were righteous, even if Kahane’s “light” and “joy” departed long before he did.

His writing seemed to poke you in the chest (with snarling titles such as, “Listen World, Listen Jew”). Kahane’s New York incarnation was a scorched trail of sarcasm, secret identities, threats, pseudonyms and alliances with the likes of Joseph Colombo, boss of one of the mafia’s notorious “five families.” (Those years come into view now in the wake of Israeli Prime Minister Benjamin Netanyahu’s partnership with Otzma Yehudit [Jewish Power], the political party with Kahane roots.) Like Colombo, Kahane never had blood on his hands, but blood was in the vicinity. Sophisticated Jews, the ones Kahane called the “Nice Irvings,” thought him crude, an anti-Arab racist, the boy who cried wolf. Then Kahane was shot to death by an Egyptian, his son and daughter-in-law were shot to death by a Palestinian who didn’t know who they were in a drive-by ambush in the West Bank in 2000. Kahane turned out to be the boy who cried wolf who was eaten by the wolf. 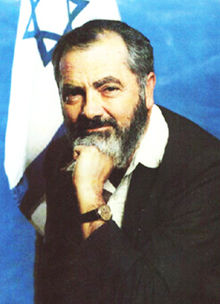 For a fleeting moment, he inspired and excited many among us — strange as it is to conjure up those long-ago afternoons.

He was born in a different time, 1932 Brooklyn, during the Hoover administration, during the Weimar Republic, with Hitler’s ascendency only weeks away. Young Meir met his father’s friends, Zionist “wolf criers” Ze’ev Jabotinsky and Hillel Kook (alias Peter Bergson). Bergson was a sidekick of Ben Hecht. They pioneered the first full-page ads in The New York Times on behalf of Jews in trouble. When it was still believed that Jews could be ransomed out of Germany, one ad said, “For Sale … Guaranteed Human Beings, $50 a Piece.”

Kahane envied that Bergson-Hecht film-noir cool, but the coolest he ever got (and it was pretty cool) was getting hired by Woody Guthrie to be Arlo Guthrie’s bar mitzvah teacher. Years later, Arlo would tell reporters, “Rabbi Kahane was a really nice, patient teacher.” Then, “he started going haywire. Maybe I was responsible.”

With a law degree and Mir Yeshiva ordination, Kahane infiltrated the John Birch Society for the FBI, among other mysterious adventures. In 1968, he started the Jewish Defense League, with the motto of “Never Again!” and a logo featuring a clenched fist punching through a Jewish Star. In those early days, Kahane was less concerned with Arabs than with protecting Brooklyn neighborhoods, Soviet Jewry and apocalyptic anti-Semitism. He warned Jews to be ready — “I feel that a disaster looms.” Twenty-three years before the Crown Heights riot, he said, “American pogroms” are coming, maybe worse.

His JDL was comprised mostly of Modern Orthodoxy’s “lost boys,” who loved the Jewish people (well, not so much American Jewish people but Soviet Jews and nationalist Israelis), and they were eager to rumble. Wearing brass knuckles and wielding baseball bats that had spent the summer in bungalows, they were the Jews “who couldn’t be prouder, and if you can’t hear us, we’ll shout a little louder.” It was so much fun they shouted a little louder, anyway. Uninvited, the JDL stood ready on the steps of Manhattan’s Temple Emanu-El in response to a black group that threatened to show up demanding reparations for what they said the Jews did to blacks. The blacks didn’t show up. Kahane let it be known that there was a “new Jew” on the street, not a nervous Jew but a tough Jew. How tough? You don’t want to find out.

They released mice to run through Russian offices. They threw bags of blood (chicken blood) at Soviet cultural performances.

Yossi Klein Halevi, in his “Memoirs of a Jewish Extremist,” recalls a 1971 talk by Kahane in New York: The “Nice Irvings” say, “‘Violence is unJewish! The Bible says so!’ In the Bible, Kahane pointed out, “we find the story of a man named Moses who saw an Egyptian beating a Jew. And what did Moses do? Set up a committee to investigate the root causes of Egyptian anti-Semitism? The Bible says, ‘And he smote the Egyptian.’”

Kahane, recalls Halevi, then turned to the trial of Edward Kuznetzov and Mark Dymshits. The Soviet KGB foiled their plan to steal a 12-seater plane to fly a group of Soviet Jews out of the country. If found guilty, Kuznetzov and Dymshits would get the death penalty. Kahane rhetorically warned Leonid Brezhnev, then the iron-fisted Soviet leader: “Listen Brezhnev and listen well. If Dymshits and Kuznetzov die, Russian diplomats will die in New York, two Russians for every Jew!”

The cheers in the room where Kahane was speaking were heard in Soviet dungeons.

Years later, Yosef Mendelevitch, who served 21 years in prison for his role in the Kuznetzov case, said Kahane’s activities “showed [us] that Jews cared.” According to Haaretz, Bob Dylan — long before his “Neighborhood Bully” song defending a tough but lonely Israel — was also among those intrigued by Kahane. Dylan told Time magazine in 1971 that Kahane is “a really sincere guy. He’s really put it all together,” before Dylan backed off. Kahane, davening one night in The Carlebach Shul, asked Shlomo Carlebach for a blessing. Shlomo thought it over, and told him, “In an imperfect world, anytime you’re doing something holy, there’s always opposition. Reb Meir, from now until Moshiach, there should always be opposition to everything you’re doing.” Those who loved or hated Kahane — and even Kahane — shared a good laugh.

Kahane would crack-wise, “every Jew a .22.” In 1971, he upped the ante and was slapped with a suspended sentence for conspiracy to manufacture explosives. In 1972, on a winter’s day, someone from JDL threw a smoke bomb into the New York headquarters of Sol Hurok, an impresario who often brought Soviet classical musicians and dancers to New York. When the smoke cleared, one of Hurok’s employees, Iris Kones, a 27-year-old Jewish woman, was dead.

For many, if not most Jews, the Kones murder was the beginning of Kahane’s end in New York. JDL withered. Kahane had already been spending more time in Israel, but now completed his family’s move to that Jerusalem apartment, and his own move into politics, winning a Knesset seat (before his party was banned by the government in 1988 for being “racist” and “anti-democratic”). 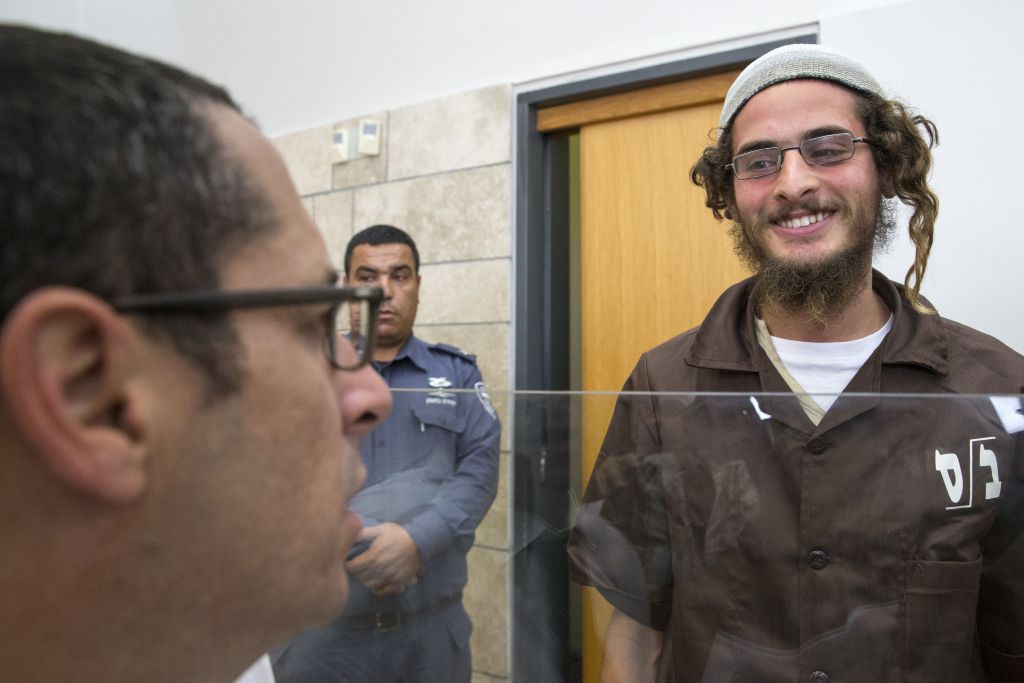 Meir Ettinger talks to his lawyer as he stands at the Israeli justice court in Nazareth Illit on August 4, 2015, a day after his arrest. Getty Images

He came back to New York, now and then. I last saw him in my grandfather’s small Bronx shul in the shadows of the elevated subway trestles. A handful of old Jews who didn’t have the money to leave the devastated neighborhood occasionally used the old shul as a social club. One Sunday, these poor and powerless Jews, looking for inspiration, wanted a famous Jew, or two, to tell them stories about Jewish life beyond their few blocks. The only two famous Jews who came, separately, from far-off Brooklyn, were Rebbetzin Esther Jungreis and Kahane. He came, Kahane told me, because that’s what Jews do; they come when other Jews call. I owed him one.

Several years after sitting shiva, Binyamin Kahane — reluctant heir to his father’s movement — was visiting New York and came up to The Jewish Week. He and his wife Tali now had five daughters and a son, Meir. On the last day of the year in 2000, the Kahanes, driving on a road near Ofra, were ambushed and murdered, their six children orphaned.

Meir Kahane (aka Ettinger) is now 27. He hears talk about “the cycle of violence.” He knows all about it. His grandfather was murdered by al Qaeda bullets. His parents were murdered by Palestinian bullets. In January, Meir was picked up for questioning by Israeli police. He was linked to an anti-Arab underground, with bullets all their own.