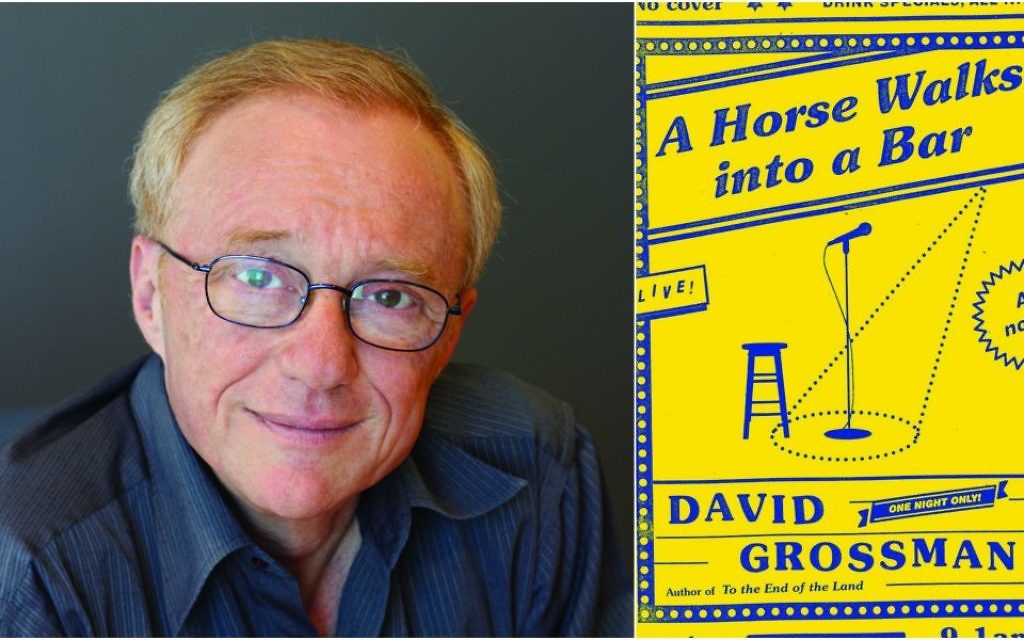 David Grossman’s latest novel is set in a basement comedy club in the city of Netanya, where waitresses in short shorts and purple neon tank tops weave through the crowd, and a middle-aged comic is telling tired jokes.

“A Horse Walks into a Bar” (Knopf) takes place over the course of one evening performance. A book full of punch lines seems like a new direction for Grossman, one of Israel’s finest novelists, but the reader quickly senses that the comic routines have dark undertones, and that Grossman is exploring new but familiar territory: childhood traumas, the after-effects of the Holocaust, the struggles to live an authentic life, the crime of indifference.

The narrative, jokes and all, is original and gripping. Dov Greenstein is short, skinny, with glasses, wearing platform cowboy boots and a worn T-shirt on stage. He’s constantly moving, doing shtick, keeping up a patter that occasionally gets laughs. He has moments of charm and flashes of a sweet smile, alternating with looks of deep torment. The story is told by a retired judge, Avishai Lazar, a childhood friend of the comic’s who is surprised to be invited, or rather, summoned, to the show.

It’s surprising to hear that Grossman has never been inside a comedy club, that he invented the banter and atmosphere. Nor has he remembered more than two or three jokes in his life. In an interview in his home on the outskirts of Jerusalem just before a trip to the United States to launch the American edition, he explains, “I just had to find the melody of the language.” He mixes slang, obscene, rude and a loftier language, hinting that Dovaleh is in fact well-read and chooses “in which layer of the language to speak.” 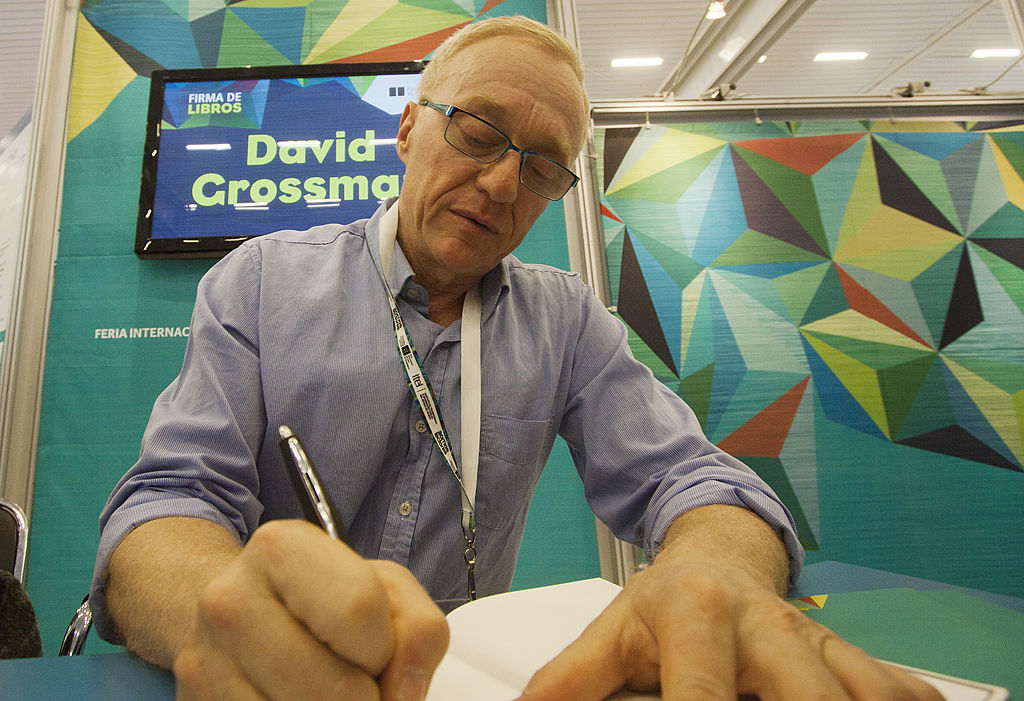 Asked about the connection between humor and darkness, Grossman agrees, at first ambivalently, that good comedy has a layer of sorrow or grief that makes the humor richer.

“It is also true the other way around,” he says. “That humor is one of the most meaningful or effective ways of dealing with grief and any catastrophic situation. And having the ability to use humor shows you are not a victim.”

Grossman’s son Uri, a tank commander in the IDF, was killed in August 2006 in the last hours of the Second Lebanon War. The day we meet, he points out, is exactly six months after the 10th yahrtzeit. The tragedy is present, in our conversation, in their home, but he has chosen the path of affirming life, “acting against the temptation to surrender in despair.”

“Humor is one of the most meaningful or effective ways of dealing with grief and any catastrophic situation. And having the ability to use humor shows you are not a victim.”

Conversation shifts easily from literature to politics and back again. Even as the Jerusalem-born author tries to steer talk to his novel, he veers into the “matzav,” or the “situation,” to questions of peace, the Palestinians and politics in Israel. Grossman is strongly identified with Israel’s peace movement and is looked upon by some as a secular prophetic voice.

In his writing, Grossman tries to envelop a situation, look at it from different points of view and show the blind spots of each side. These days, he says, the occupation prevents people from seeing so many elements of life. “The great pleasure of writing,” he says, “is this ability to move freely between all the selves that inhabit you. In every one of us, there is a man and there is a woman, and the shadow of elderly life is already cast on a young person if he allows himself to be aware of it. In every heathy person there is a sick one; in every normal person there is an insane one. Something that sounds strange is that in every Israeli there is also a Palestinian and vice versa. Because of the proximity, enemies become similar in so many ways. They will not admit that.” Israel’s novelist David Grossman poses for photographers in front of the Odeon Theatre after been been awarded with the Foreign Medicis prize in November 2011 in Paris. Getty Images

For 26 years, he has met weekly for a chavruta, a traditional style of studying Jewish texts — it is usually done in pairs, but his is a trio, with the poet Rivka Miriam and another friend. They have studied much of the Bible, and are now taking a break to study Kafka, “one of those writers who discovers another dimension of our being.”

Writing, especially the beginning of a project, is a very physical act for Grossman. He doesn’t sit still. To create and understand Dovaleh, he went through all of the comic’s stage movements, like “turning around slowly on the axis of one foot like a compass.”

In the comedy routine that becomes a deep autobiographical tale, Dovaleh describes how he learned to deflect attention by walking on his hands. None of the neighborhood kids hit him when he was upside down, and no one made comments on the street about his beautiful mother, a Holocaust survivor, with her downcast glance and old shmatte on her head (trying to hide from God), when he walked ahead of her on his hands. In flashbacks, he tells of a pivotal time as a 14-year-old in Gadna, a military training camp for teens, when he was told he had to leave, quickly and suddenly. The judge was there too as a boy, and hadn’t seen Dovaleh since.

“In every Israeli there is also a Palestinian and vice versa. Because of the proximity, enemies become similar in so many ways.”

The judge, who is famously attentive, is asked by Dovaleh to report back about what he sees as the comic’s “secret, the tremble of singularity. Everything that lies beyond the words that describe a person.” Skeptical, the judge has his own wounds, “I walk around this world like a pin cushion as it is.”

Translating this novel (the English version is by Jessica Cohen), was challenging for the jokes and puns, and, as in his other books, the deep resonance of the Hebrew. For the second time, he assembled 15 of his translators — of languages including Spanish, Swedish, Finnish and Japanese — in Germany, and they worked together around a large table, with Grossman reading the novel aloud, sentence by sentence.

Some titles have been translated into Arabic, and Grossman would like to see “See: Under Love” and “To the End of the Land” published in Arabic. “If they are translated,” he says, “maybe those who read them will understand something about us, something that can’t be conveyed through media or television.”

Grossman’s books have been translated into 36 languages, and one unit of shelves in his home is overcrowded with foreign editions of his novels, nonfiction works and children’s books. On an adjacent wall, there’s a painting by his son Uri of a series of cypress trees, the same trees seen through a window facing their garden and, beyond that, the hills of Jerusalem. Only after Uri was killed did Grossman realize that one of the painted trees didn’t grow to its fullness like the others. Nearby is a framed photo of the handsome smiling blonde soldier.

Israeli author David Grossman delivers a speech during the awarding ceremony for the Peace Prize of the German Book Trade in 2010 in the Church of St. Paul in Frankfurt, on the sidelines of the International book fair. Getty Images

I promised the author not to give away the storyline. But he adds, “Dovaleh is a person who lives in parallel to the life he should have had, because of something that happened when he was 14.” He chose stand-up comedy as a way to create distance from being himself.

“I thought about how many people I know,” he said, “who are living a life that is not their authentic life, exiled to these lives because of wrong choices.” Sometimes, he continues, “there are moments of grace when you can unite with your real self and be your real self.”

He says that since the book has been published, he has been asked if Dovaleh is a metaphor for Israel, and he says no.

“But if there is one similarity between him and Israel, it is this sense that in the last decades we are not living our real self, we live in parallel to the life we should have had.”

He looks toward a time of peace which will allow people to reunite with their real selves, and no longer suffer the pain and insult of being separated. “At least we shall do the only thing that counts in this world. That is to live your own life, not a false life, not a parallel life. This is the only asset we really have. Yes.”

David Grossman is speaking at the 92Y (92nd Street and Lexington Avenue) on Monday, Feb. 27 at 7:30 p.m., in conversation with novelist Nicole Krauss. Tickets, from $28.