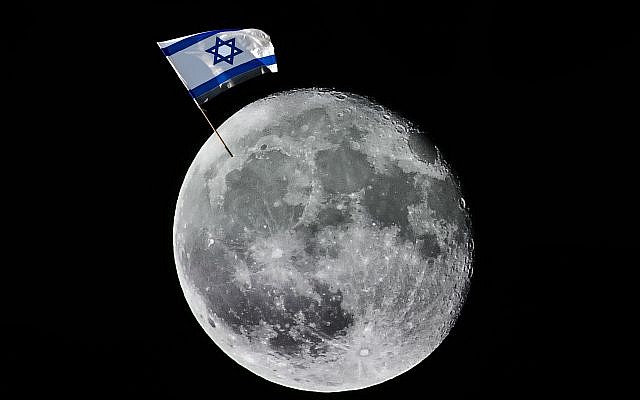 On July 20, 1969, the United States went to astonishing heights. On that day, astronaut Neil Armstrong took the first steps of any human on the moon. Afterward, NASA, along with Russia and China, continued to fund and plan missions to send more people back to space. While some of these missions ended in disaster, others have been successful and have helped us to increase our understanding of what lies beyond our planet. But now, there’s a new guest at the party: Israel.

Israel’s first unmarked rocket to the moon, The Beresheet, which essentially means “in the beginning,” made history on Feb. 21 as it took off from Florida’s Cape Canaveral, the home of NASA and SpaceX. The rocket was attached to the SpaceX Falcon 9 rocket, providing it a boost to exit Earth’s atmosphere. After departing the atmosphere, it plans to orbit around the Earth to gain the necessary speed to land on the moon. The predicted landing date is April 11.

While Israel’s primary motivation to launch pertains to Google’s Lunar X Prize, a challenge to countries to launch a rocket to the moon, it is possible there were additional motives towards the launch. Perhaps, just maybe…Israel wants to colonize the moon?

Primarily, the cargo of the rocket consisted of necessities which would be of importance to sustain life on the moon. One of such things is a Jewish Bible and an Israeli flag. It would not be difficult to pray on the moon, as long as the synagogues are facing Earth, where Jerusalem is located. As a matter of fact, Israel does not need to move the wall, as they can reconstruct the great temple on the moon, which would become the predominant place of prayer. In addition, the rocket’s load included a disk containing all pages from Wikipedia. The disk essentially serves as a failsafe in the event that human knowledge on Earth is surpassed by machine, or our “virtual assistants,” such as Amazon Alexa and Google Assistant. In that case, humanity may relearn all information which has become forgotten prior to this proposed migration.

In addition to the payload of the rocket, Israelis may be motivated to move to the moon because of the circumstances here on Earth. Here in the United States, BDS and anti-Semitism are growing at an unprecedented rate, further pushing Israel into isolation. Jews across the world are finding it harder each day to practice even the most basic Jewish customs. However, should Israel go for the stars, what does BDS have to boycott? The moon? Will it be the end of romantic moonlight walks, or even looking at the moon at all? For some, it may very well be. Meanwhile, Israel will at least have freedom and would not have to concern themselves with these issues.

However, a concern which may arise will be Israel’s capability to survive on a foreign planet. Israel will be required to supply their own materials and goods from Earth in order to sustain life. They would also need to construct extensive spacecraft and potentially some form of a space station, which may not be in the economic interests of the country. This will also require a large flat space that is of distance from residential areas to launch the aforementioned equipment or continue to contract with SpaceX for launches. Lastly, health and medicine should be considered when debating this rather immense decision, as a sickness on the moon may go uncured and could even result in death should the proper medicine and additional medical materials not be present. Essentially, it is the technological, biological and mostly financial factors which may deter Israel from taking that one giant leap for humanity.

Although this presents a series of challenges, who else but Israel would not be daunted by these issues. It is the large, looming presence of business, nonprofit and other public or private organizations which would permit the above plan to go into effect. Israel is home to the second largest number of startups on the planet, just below Silicon Valley. These startups are capable of surmounting the challenges of providing all resources Israel should need to settle on the moon. After all, we can now generate water from the air, so why not generate water from the atmosphere on the moon? Plus, new battery technology can last for potentially years along with several recharges provided by renewable energy sources, including solar panels.

In addition, SpaceIL, the company which built and launched the State’s first rocket into orbit along with the SpaceX Falcon on Feb. 21, would as well contribute to the project and reduce the funds the government would be required to pay. Therefore, the government of the State of Israel may not need to concern themselves with providing the bulk of the economic capital for this equipment. They also do not need to scatter in search of available land because usable land can be attained in the Negev desert and Ramon Crater.

Once the moon has been colonized and cultivated by Israel, NASA and other space programs can focus on their predominant target: Mars. Hopefully, it won’t be long until the first human steps foot on the red planet. Then, in the event Earth is led to extinction due to extensive climate change and rising sea levels, the rest of the world can reside on Mars, while others occupy the remaining space on the Moon. With examination of the habits of humanity, it won’t be long until these planets and celestial objects which, though they seem foreign and distant currently, will become commercialized and as built-up as the Earth itself. Eventually, once this occurs, living without gravity and davening in space will become the norm.

Fresh Ink for Teens is an online magazine written by, and for, Jewish students from high schools around the world