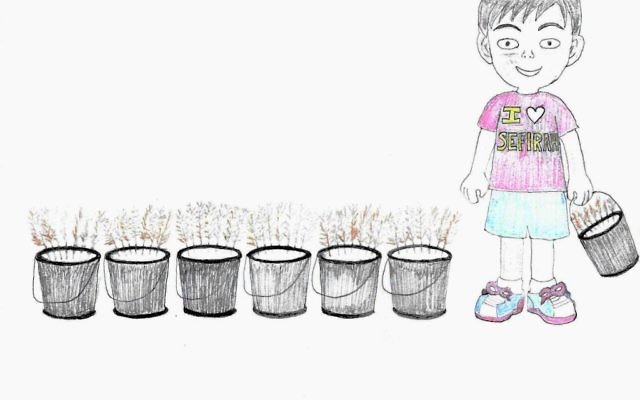 The sefira challenge prefers buckets of wheat, not ice. The shafts of wheat signify a harvest and the wheat offering that was brought to the Temple on Shavuot. Courtesy of Emily Saperstein

If you ask almost any person, whether they’re a religious Jew or devout Christian, that person will have heard of Passover. How could one not? Pesach (the Hebrew word for Passover) is a time of redemption and rejoicing, in addition to marking a time when God showed the world His true strength by liberating the Jews from Egypt. There’s something uplifting about walking down the aisles of my New Jersey supermarket and finding seven different matzah brands. Even those who aren’t personally connected to the holiday know that the Ten Plagues were kind of a big deal — who wants to bite into a piece of bread to find little frogs grinning back at you? Passover has even surpassed Yom Kippur, the holy Day of Atonement, as the most meaningful Jewish holiday of the year, according to an article in the Huffington Post. It’s not a holiday that passes by unnoticed.

After the matzah is finished, the Jewish nation returns to a mundane schedule, eagerly awaiting the arrival of the next Jewish holiday: a little gem called Shavuot. This holiday is dedicated to rejuvenation, and relishing in the glow of the Torah. On this day, the Jewish nation received the Torah — our life code — at Mount Sinai and we’ve been learning it ever since. It feels like it takes forever for the holiday to come, especially with finals and hectic work schedules. The one thing that keeps the Jewish nation inspired and excited for the days of Shavuot is the challenge of Sefirat HaOmer, counting the days of the omer, a concept that is shortened and referred to as sefira.

Sefira is the concept of counting seven full weeks from the second night of Pesach until the start Shavuot. Every night, after three stars are observed in the sky, we make a blessing and count the day and if applicable, the amount of weeks that have passed, for seven weeks straight. These 49 days are a special time of year, a unique time to refine ourselves in preparation for one of the holiest times of the year. The challenge is utilizing this period to fix our internal mistakes and work on our relationships with others, as well as with God. Even though Shavuot begins Saturday night, it’s never too late to start some personal reflection. Some examples of areas to work on during sefira include chesed (kindness), netzach (endurance), and yesod (bonding). My friend Avigail is working hard on not saying lashon hara about others while I’m working on my connection with God through prayer. Some of my friends are taking half an hour a night to learn a book together on improving one’s behavior. It’s a hard challenge, one that many cannot face, but those who do reap rewards beyond comprehension. After facing internal and external challenges and working on the physical self for 49 days, the Jewish nation is finally worthy to receive the gift that they so rightly deserve: the Torah. On the 50th night, many Jews stay up all night and learn Torah in order to grow and rejuvenate over the receiving of our priceless treasure.

A mourning period was established during these 49 days for the 24,000 students of Rabbi Akiva, who all perished in a plague during this time (Lag B’Omer, the 33rd day of the omer, is excluded from the mourning period). The sadness makes the challenge more meaningful. There are various laws and customs regarding observance of the seven weeks but a lot depends on community and family traditions. Some examples include not having a wedding, not cutting hair and not purchasing or wearing new garments. Live music is also a big deal — most observers of the omer do not attend concerts. There is, however, a concept that recorded music is OK but some hold that only acapella music is permitted and many (including myself) follow this custom. Others forbid music of any kind and refrain from listening to it for the entire 49 days. Sefira is a time to face struggles within ourselves and mend relationships with others and to put our physical needs and desires aside.

Pesach is a time of redemption and rejoicing over the miracles that God openly performs while Shavuot marks rejuvenation over the gift He has generously presented to His children. How does one get from a position of rejoicing to rejuvenating? Refinement. By taking advantage of the seven weeks of Sefirat HaOmer, one can refine internal struggles and fix relationships with others, leading to a much higher spiritual level. When we have done our part to be a more spiritual being, then we are truly deserving of the Torah on Shavuot.

Take the lesson home with you and make yourself a better person than you were yesterday. Will you take the sefira challenge?