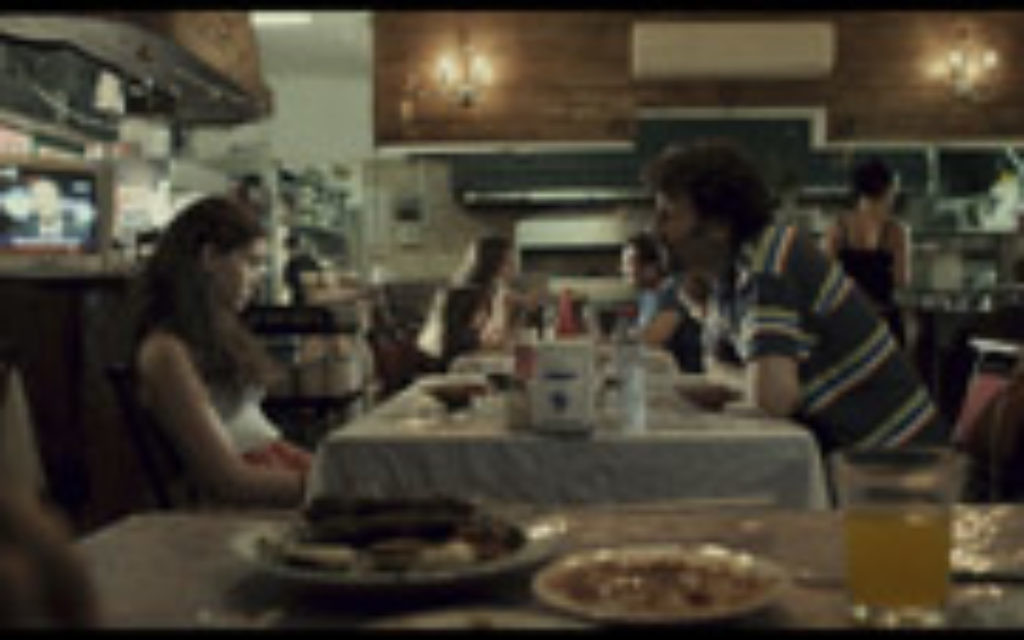 Sometimes a film’s first few shots tell you almost everything you need to know. Consider the case of “Off-White Lies,” the 2011 directorial feature debut of Maya Kenig, playing here Tuesday, June 12. In the film’s first shot we see a close-up of Libby (Elya Inbar), an adolescent girl dragging a suitcase and carefully carrying a potted plant across an air terminal, her face a mix of uncertainty and determination. Kenig cuts to an overhead shot that isolates the girl in the frame; she is surrounded by the unreadable space of the terminal’s featureless floor. A couple of shots later, we hear, then see Shaul (Gur Bentwich), her father, a boyish figure in a wildly inappropriate Hawaiian shirt, arguing rather playfully with a cab driver over parking.

With striking economy, Kenig has conveyed to the audience the family dynamic that will dominate her film, the strange imbalance between the child mature beyond her 13 years and her feckless dreamer of a father. And Kenig, who was born in 1979 has also announced herself as a filmmaker with self-assurance that belies her own relative youth.

It has frequently been observed that Israeli artists have a higher-than-usual tolerance for ambiguity and uncertainty, and a refreshing tolerance for open endings. If Israel itself is a work-in-progress and a comparative youngster among nations, her artists see the world as a reflection of that state. “Off-White Lies” is a prime example, a film that eschews easy characterizations and sidesteps potential melodrama for something more complicated.

Shaul is a luftmentsch, a dreamer who fancies himself an inventor of potential importance. Virtually homeless, he needs to find a place to settle his daughter when his ex-wife sends her to him from California. It’s 2006 and the Lebanon War provides him with a convenient solution: he and Libby will pose as refugees from the missile attacks in the north and settle in as guests in someone’s home in Jerusalem. It seems all too easy when they are paired off with a well-to-do family, Gideon (Tzahi Grad), Helit (Salit Achi-Miriam) and their 18-year-old son Yuval (Arad Yeini). All they have to do is keep the lies from becoming too outlandish and the truth from becoming too apparent.

Kenig and co-writer Dana Dimant resist the temptations of caricature and easy laughs. Bentwich plays Shaul as a charmer, certainly, but he’s neither quite as foolish nor as facile as the character could have been. The most convincing cross-reference would be Ronald Bronstein’s astonishing performance as the father in “Daddy Long Legs”: a resilient wild man with a knack for self-preservation, alternately funny and pathetic; Bentwich brings the same survivor instinct to Shaul. Similarly, Tzahi Grad, so often a merely menacing gargoyle who seems to have been parachuted into Israel from a ’30s Warner Brothers gangster film, is no less threatening here; but his Gideon is nuanced and complicated in ways that render his motivations more mysterious and provocative.

But the real keeper in this nicely tuned ensemble cast is Elya Inbar. In her performance, Libby is that utterly believable hybrid of girl-almost-woman, mercurial and unpredictable, equal parts American and Israeli, self-assured and yet afraid, childish and precocious. Her scenes with Arad Yeini are a marvel of mixed emotions as Libby tries prematurely to negotiate the transition between adolescence and adulthood.