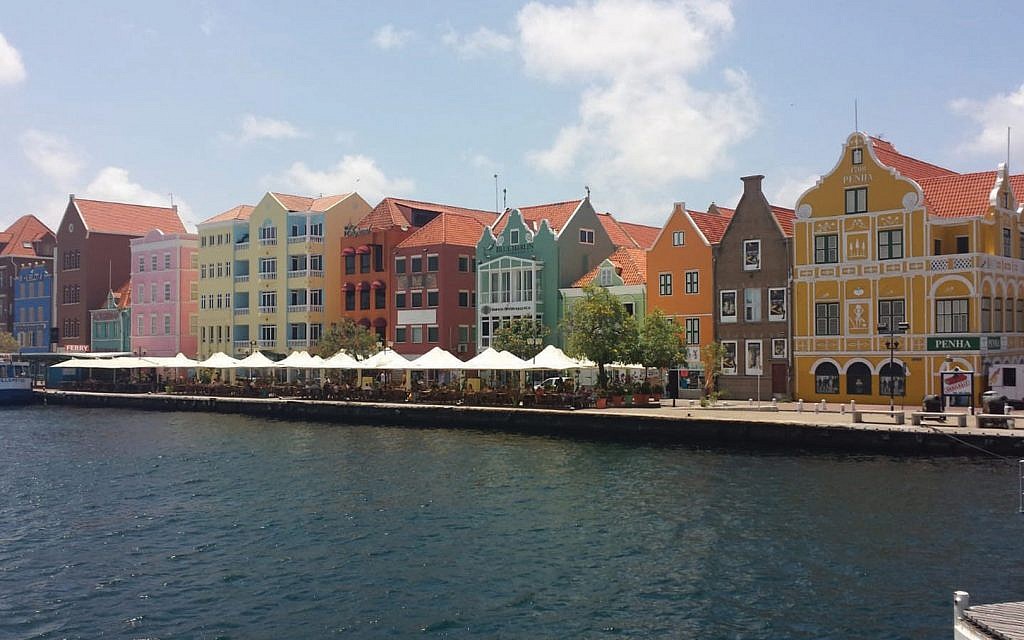 The signs are subtle, but they are definitely there: Hebrew words incorporated into Papiamentu, the hybrid language spoken by the islanders; mezuzot attached to doorposts; commercial signs for “Levy Maduro,” the name of a prominent Sephardic Caribbean family, and for Curaçao Liqueur, a kosher spirits company.

Jewish life on the southern Caribbean island of Curaçao, an autonomous country within the Kingdom of the Netherlands, dates back to the 17th century, with the arrival of the first group of Sephardic Jews from Amsterdam. Later came a wave of Ashkenazi Jews. Down from a peak of 2,000 at the end of the 18th century, an estimated 200-300 Jews, both Ashkenazi and Sephardic, remain in the country.

I visited this nation — 40 miles north of Venezuela and with a population of just 150,000 — last May as part of a Jewish journalists’ group hosted by the Curaçao Tourism Board. I discovered a country with a rich Jewish past and some influential Jewish families, but with an aging Jewish population and uncertain future for the community.

Curaçao’s first Jews, 12 Sephardic families from Holland, arrived in 1651 and founded Congregation Mikvé Israel on what today is the site of the island’s oil refinery. Descendants of families who fled Spain and Portugal during the Inquisition, they were drawn to Willemstad, the country’s capital and mercantile and trade center, and built a new synagogue there in 1703.

The Jews demolished that synagogue in 1730 and built the current house of worship in its place, consecrating it in 1732. It is the oldest continuously used synagogue (“snoa” in Papiamentu, the hybrid language spoken throughout the Dutch West Indies) in the Western Hemisphere; it operates every Shabbat and Jewish holiday, and a museum is adjacent to it. The synagogue interior, similar to many Sephardic or Orthodox synagogues, is modeled after the Portuguese Synagogue of Amsterdam, and is decorated with wooden balconies and a tebah, a pulpit housing the 21 Torah scrolls (the oldest dating to around 1420), in the center of the prayer space. 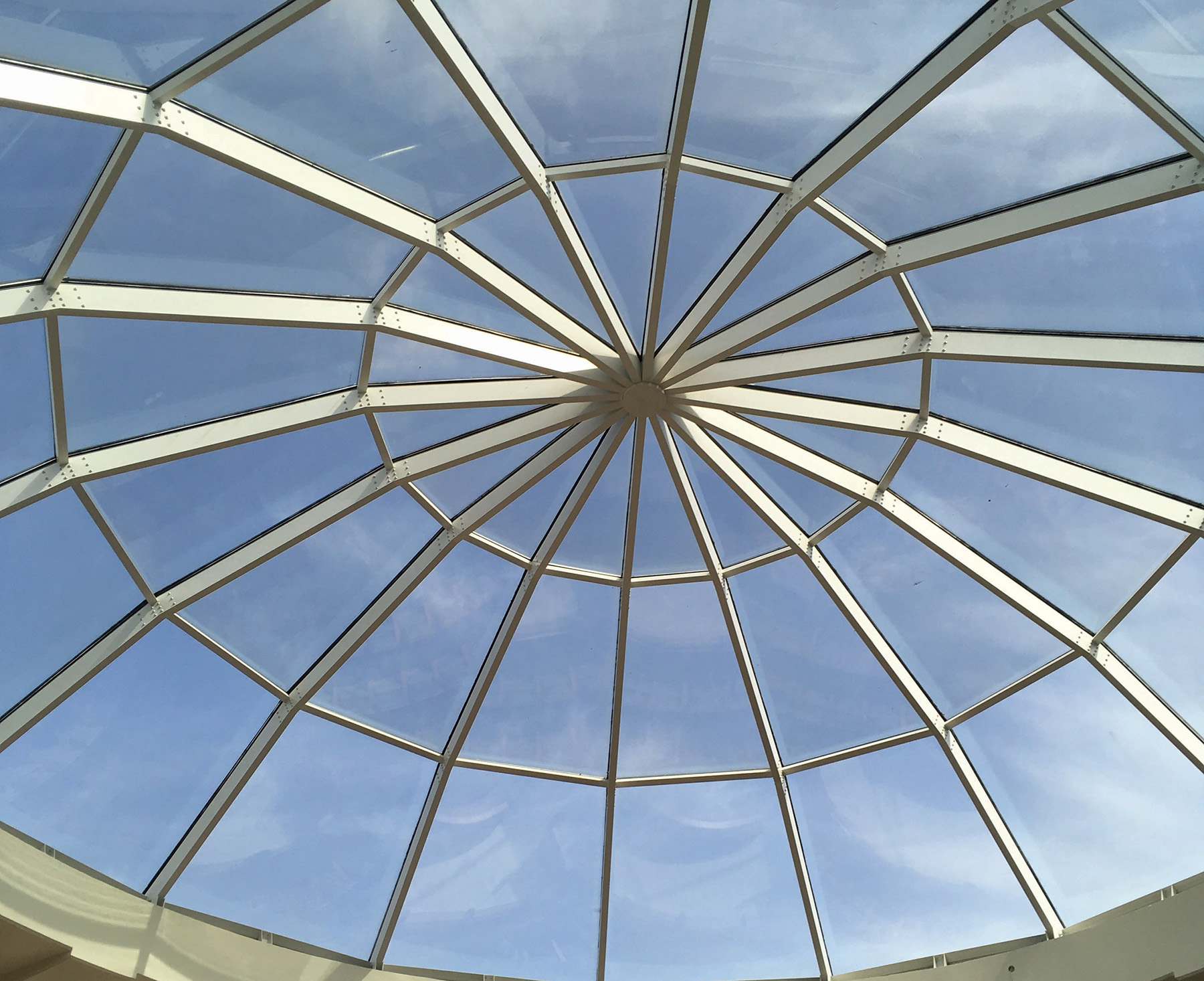 But the ritual practices have evolved significantly since the 19th century. René David Levy Maduro, a past president and the unofficial historian of the congregation, told our group that in 1864, following the advent of the Reform movement, a schism developed among members over the use of an organ during services, forbidden in Orthodox synagogues. The 641-pipe organ was installed in 1866, and was in use for 100 years before falling into disrepair. On the synagogue’s 250th anniversary in 2002, the government of Holland provided funds for its restoration.

While a group of members had left Mikvé Israel to launch the Reform Temple Emanu-El (now the site of Curaçao’s Prosecutor’s Office), in 1964, the two congregations merged to form Mikvé Israel-Emanuel (MIE), allowing full participation for women in the service. MIE uses a Reform siddur but follows much of the Sephardic liturgy, said Levy Maduro, and it affiliates with both the World Union for Progressive Judaism and the Jewish Reconstructionist Federation. Its religious leader, Hazzan Avery Tracht, is an Ohio-born, Dutch-speaking, Reform-trained cantor.

A hallmark of MIE is the sand-covered synagogue floors. Three explanations are traditionally given. One is that it symbolizes the Jews’ wandering 40 years through the desert from Egypt to the Promised Land. Another is that is represents God’s prophecy to Abraham: “I will multiply your seed as the sands of the seashore and the stars in the heavens (Genesis 13:16).” And, said Levy Maduro, just like the descendants of Abraham, “we are still here.”

The last explanation for the sand, a feature unique to Sephardic synagogues, is that it is in remembrance of the Curaçao Jews’ past in Spain and Portugal; during the Spanish Inquisition, the remaining “Conversos,” or secret Jews, covered their synagogue floors to muffle the noise of prayer and avoid detection.

While MIE draws from its rich past, another synagogue in Curaçao looks toward future growth. Rabbi Refoel Silver, just 25, is a representative of the Chabad-Lubavitch movement who came to Curaçao in 2017 with his French-born wife and baby daughter to create both a hub for Jewish tourism and serve as a resource for the local Jewish population. 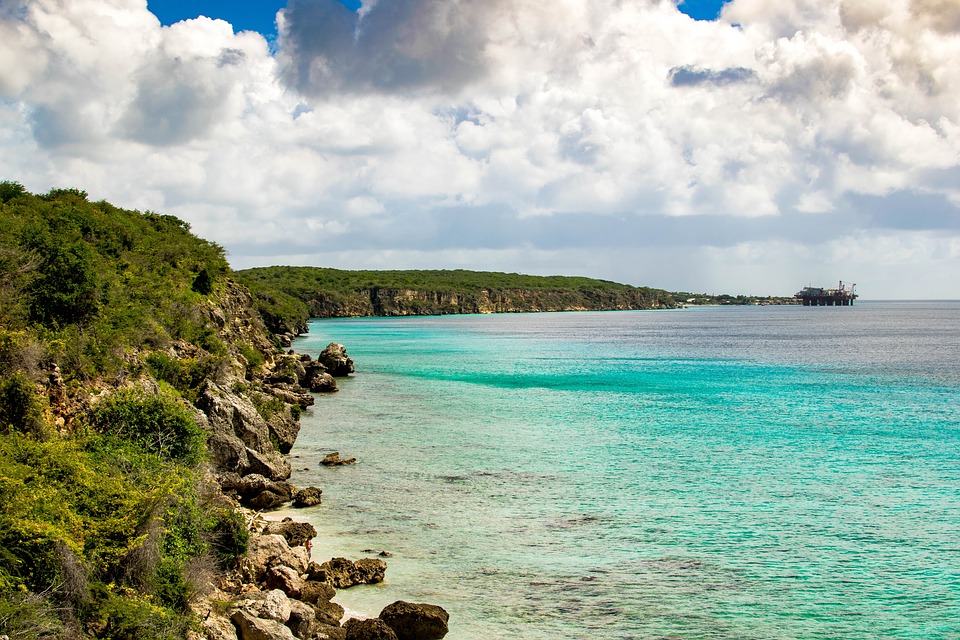 Bubbling with energy, he noted that in the 1950s there were about 265 Ashkenazi families; Silver’s synagogue, Shaarei Tsedek (chabadcuracao.com), which is Ashkenazi and Orthodox, was founded in 1959 and has about 80 members. Its previous rabbi of 20 years, Ariel Yeshurun, helped build the facility in the upscale Mahaai neighborhood before leaving Curaçao in 2011, and for several years the synagogue had no permanent rabbi. Acknowledging that he is the only fully shomer Shabbat member, Silver said that his community, while not observant, is traditional, and “it comes from a very good place.” And while the synagogue is officially Ashkenazi, it counts Sephardic Jews among its worshipers and uses Sephardic pronunciation at its services. Some 20 to 30 people regularly attend services on Shabbat, according to Silver; a kiddush is held Shabbat mornings. 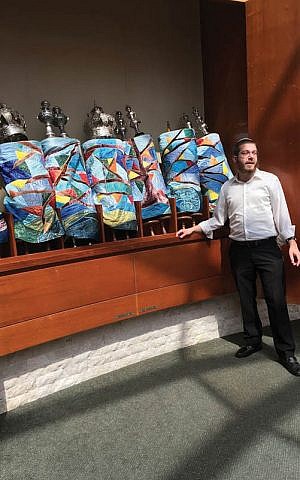 “You’ve got to go wherever there are Jews,” said Silver, who was offered a posting by Chabad in Paris, but chose the Caribbean instead. “There’s a crazy potential here,” he said. To help fulfill that potential, his wife, Chani, has started a Mommy and Me program and organized a challah bake, and the couple hosted a public menorah lighting downtown and a Lag b’Omer barbecue last year that attracted some 75 people. “We’re finding more Jews here that we haven’t known about before, Jews who have moved here in recent years,” said Silver.

The rabbi believes that Curaçao is a draw for tourists as a less expensive alternative to the neighboring island of Aruba. The Silvers regularly host Jewish visitors on Shabbat, and he said it is possible for observant tourists to stay at the Trupial Inn, which is in walking distance of the synagogue. Silver himself brings in kosher meat from the United States and said kosher products, including challahs, are available at local supermarkets. “The potential is unlimited,” he said.

Between the two communities, there is a joint religious school that meets weekly. Chani Silver and MIE’s Avery Tracht alternate teaching classes, and there are joint community activities for holidays such as Yom HaShoah and Yom Ha’Atzmaut and combined cemetery visits. While the overall population is an aging one, the community has seven or eight Jewish babies, with “more on the way,” said Silver, who in November had his second child, a boy. “Baruch Hashem, there is a new generation on the way.”

Papiamentu, Curaçao’s official language, is a blend of African, Spanish, Portuguese, Dutch, French, English, and Arawak Indian. According to the Curaçao Tourist Board, the first document written in Papiamentu was a 1775 correspondence between two members of a Jewish merchant family. Silver noted that Curaçaoans have a custom of wishing each other a “bon siman,” or good week, on Saturday night/Sunday morning just as Jews wish each other a “shavua tov.” Other Hebrew words incorporated into Papiamentu are “beshimanto,” from “b’siman tov”; “horban,” from the Hebrew word for destruction; “ganap,” from “ganav,” or thief; and panim, “face.” 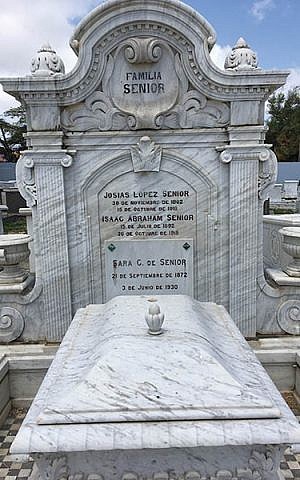 A family grave at one of Curaçao’s two Jewish cemeteries. Lori Silberman Brauner/JW

Over 1,000 people have the surname Maduro in Curaçao, Tracht told our group. A classic Sephardic name, it is also the name of Venezuela’s president, Nicolas Maduro, who has claimed Jewish ancestry, and is a common surname because when descendants of slaves had children with Sephardic men, they were given their father’s name. And commercially the name is prominent, with the presence of S.E.L. Maduro & Sons. Part of the Dutch Caribbean business group “Maduro Holding,” it was founded in 1837 by Salomon Elias Levy Maduro as a ship agent and port operator company in the port of Curaçao. When Levy Maduro’s sons entered the business, S.E.L. Maduro & Sons expanded its services and operations to other activities such as shipping, transportation, and the travel and tourism industry.

Curaçao has other interesting sites of Jewish interest:

• Senior & Co., founded in 1896, is famed for its Star-K kosher-certified Curaçao Liqueur, made with the bitter dried peels of the laraha, known as the “Golden Orange of Curaçao.” The firm was founded by Haim Mendes Chumaceiro and Edgar Senior, Sephardic Jews who immigrated to Curaçao and have a prominent place in the island’s history. Tours and samplings are available; visit chobolobo.com for more information. 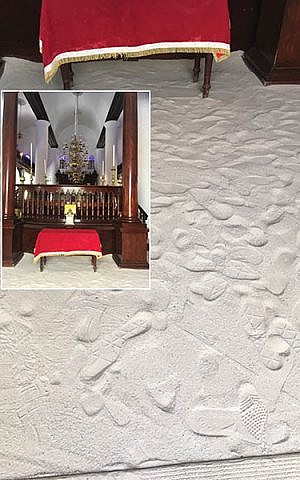 • Landhuis Bloemhof (bloemhof.cw), a plantation on the island, has been owned by a Jewish family for almost 100 years; its main building dates back to 1735. In 1919 Emma Maduro-Lopez Penha bought the estate and its seven acres of grounds to be used as a family retreat and vacation home. With mezuzot on the doorways, it now houses a gallery, library, workshop area, sculpture garden, and permanent exhibition in the studio of May Henriquez, a pioneer in the arts in Curaçao and late mother of Landhuis Bloemhof’s current chair, Nicole Henriquez.

• “House of Life.” A classic name for a Jewish cemetery, there are two in Curaçao named Beth Haim (bethhaimCuracao.com), the older one dating to 1659. The cemetery contains 2,500 graves, and many of the tombstones are adorned with sculptures representing biblical passages and other symbols, such as a tree being cut off at its root to symbolize an early death. Unfortunately, as a result of its location, next to the oil refinery, the vast majority of the graves are unreadable from corrosion. The newer cemetery, established in Berg Altena, closer to downtown Willemstad, dates to the second half of the 19th century and is a burial site for both Sephardic and Ashkenazi Jews. Sadly, there is a section devoted to infants and young children, some whose birth and death dates are the same.