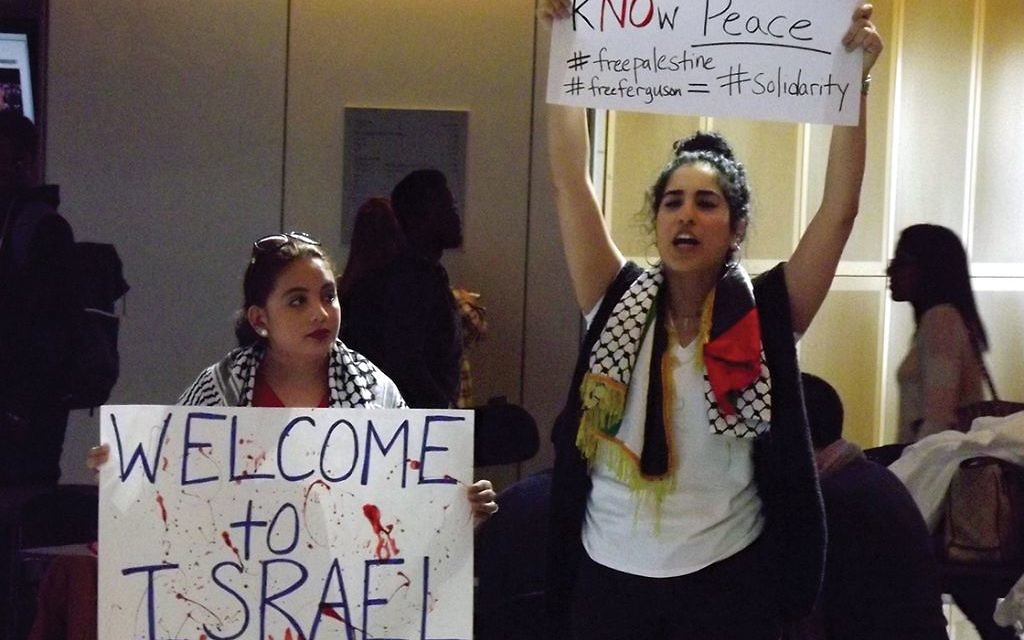 Two and a half weeks after a group of students chanting slogans including “Zionists off campus” broke up a Brooklyn College faculty council meeting, City University of New York Chancellor James B. Milliken announced the school had hired outside attorneys to investigate complaints that a student group is causing Jews to feel harassed and physically unsafe.

But while some Jewish organizations have praised CUNY for its response, others say it’s not enough and that the student group behind most incidents, Students For Justice In Palestine (SJP), must be shut down.

Milliken’s announcement last week came in response to a 14-page letter from the Zionist Organization of America, detailing numerous complaints the group has received from students at four CUNY campuses: Brooklyn College, John Jay College of Criminal Justice, Hunter College and the College of Staten Island. The complaints ranged from individual comments (“I don’t hug murderers” was one) to swastikas carved into desks, to students yelling offensive slogans at unrelated rallies, including “We should drag the Zionists down the street!” and “Jews out of CUNY.”

At the College of Staten Island, SJP’s banner depicting the State of Israel covered by a keffiyah hangs in the campus center, the rotunda, despite Jewish students’ complaints. At Brooklyn College, a professor wearing a kipa was called a “Zionist” something — he couldn’t hear the second word though another professor at the scene said it was “pig.”

In addition to the probe, Milliken also announced that he has appointed two separate committees of administrators, faculty, and students to address the situation. One would “define best practices” to foster “a climate of mutual respect and civil discourse” on campus, and the other would make sure the university’s policies protect free speech.

“We’re deeply disappointed with Milliken’s actions,” said ZOA’s national president, Morton Klein. “All Milliken has done is condemn anti-Semitism. We demand that they condemn the student conduct,” and, if merited, revoke the club’s student-group status.

“When these sort of things have happened to other groups at other schools, those student groups have been shut down,” he continued. “No gay, black or Hispanic group would accept the administration saying: ‘We’ll look into it.’”

ZOA attorney Susan Tuchman pointed out that Jewish students are a protected group under Title VI of the Civil Rights Act and that, under that act, universities must take prompt and effective steps to address the situation and prevent a hostile atmosphere from reoccurring.

“It’s been done [before] and we’re saying: There’s no reason to treat the concerns of Jewish students less seriously,” she said.

Klein criticized other Jewish organizations for failing to join ZOA in speaking up. “Why isn’t ADL demanding this? Why isn’t AJCommittee? [sic],” he said.

In fact, the Anti-Defamation League released a statement commending CUNY for “taking these allegations seriously.”

“I think CUNY’s steps in doing the probe are the right first steps,” said Evan Bernstein, ADL’s New York regional director. “I think doing things in a smart fashion and not as a [hasty] reaction is a smart approach.”

An AJC spokesman said his organization has a different approach from ZOA and also noted that Milliken traveled with AJC to Israel in 2008.

Jacob Levkowicz, AJC’s assistant director of campus affairs, said in a statement: “Combatting BDS is a top AJC priority, and our 22 regional offices across the country are working closely with like-minded campus-based organizations, reaching out to university leaders to counter SJP and other anti-Israel groups, while also deepening understanding of and support for Israel among students and faculty.”

Members of the City Council Jewish Caucus also released a statement calling the CUNY response inadequate. In a letter to Chancellor Milliken, dated March 1, all 14 members of the group save Stephen Levin said CUNY needs to “develop a comprehensive plan” and “implement system-wide policies to swiftly and openly address anti-Semitic incidents.”

Saying that the “proliferation” of swastikas and anti-Semitic graffiti on many campuses indicates “latent hostility,” university officials should be “decrying the creep of hate onto their campuses” and using it as an opportunity to educate students about anti-Semitism and the need for inter-cultural tolerance. Instead, the letter says “administrators at some colleges have remained silent about the graffiti’s anti-Semitic nature, or, worse yet, ignored it entirely.”

“When anti-Semitism rears its ugly head, it must be named and condemned — as must all bigotry,” it continued, noting that at several CUNY schools, “Jewish students have reported feeling that the campus environment was so hostile that they could not wear Stars of David or kipas, openly identifying as Jewish, or espouse pro-Israel beliefs without fearing for their safety.”

After listening to CUNY Vice Chancellor Fred Schaffer read a statement condemning “all forms of bigotry and discrimination including anti-Semitism” and laying out plans for the investigation and two committees, David Greenfield called the response unacceptable.

“I have a student who is my constituent who is getting a master’s degree and she tells me that she cannot wear her star of David at Brooklyn College because she feels intimidated and threatened,” he said, “and your response is: ‘Well, we’re not really sure what we’re going to do so we’re going to hire some experts to tell us.’ Come on, that’s just not acceptable.”

Like the ZOA, Greenfield asked that SJP be punished, saying “they’re not engaging in free speech, they’re engaging in hate speech. … And honestly, if God forbid something happens to these students,” he warned CUNY administrators, “we’re going to hold you guys accountable.

Other councilmen were more measured, saying they weren’t asking for anything to be done to SJP but rather that specific systems needed to be put into place to prevent all forms of bigotry, such as a system-wide protocol requiring that hate-based incidents be reported to the police.

Levine stressed at the hearing the need for training and protocols — especially for professors who encounter bias issues. “Are there no guidelines that stipulate faculty interactions in this cases? Is there no training?” he asked.

SJP chapters from each college as well as the national and regional offices did not immediately respond to request for comment. However, the organization Palestine Legal had issued a response to the ZOA’s letter on their website immediately after it came out.

“The ZOA wants to shut down all speech on Israel/Palestine that doesn’t hew to its narrative that Israel can do no wrong,” Palestine Legal attorney Radhika Sainath said in the statement. “They’ve routinely misstated the law, misstated the facts, or both. And this is why their attempts to punish speech critical of Israel routinely fail.”

Grodenchik took on the issue of censorship at the City Council committee hearing, saying that free speech is fine as long as it doesn’t cross impinge upon the rights of others:

“I’m not asking that anyone’s speech be impinged upon, I believe wholeheartedly in the First Amendment as we all do, but there has got to be a strong policy … that when people cross the line you have got to be there.”

The administration, he said, has to “understand that the infringement of anybody’s rights, and especially their personal safety, is totally unacceptable.”