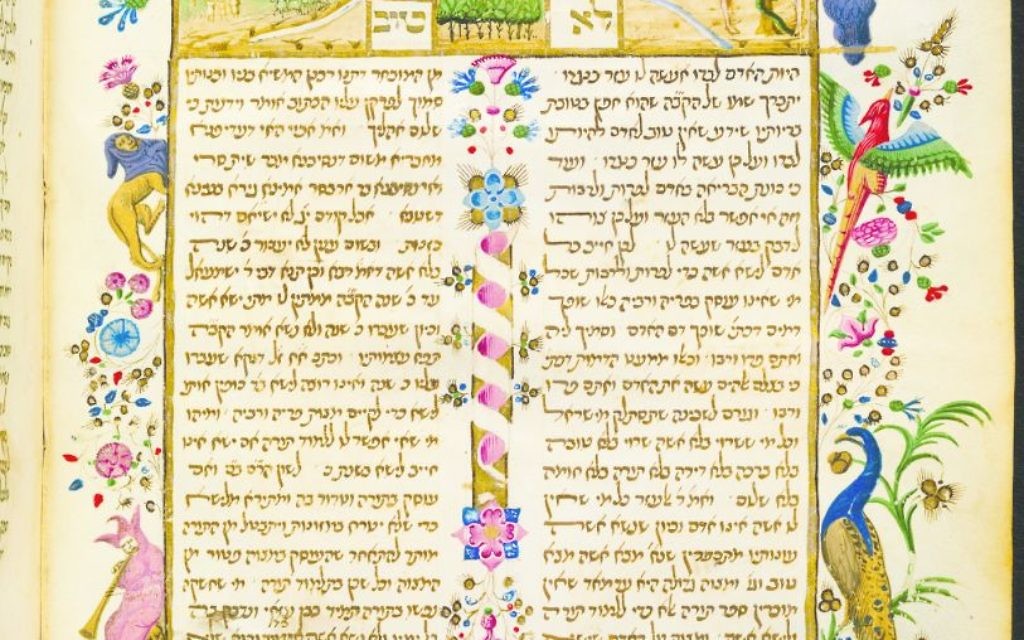 To see the Rambam’s handwriting up close is astonishing. Two of his handwritten works are behind glass, part of The Jewish Museum’s new exhibit, “Crossing Borders: Manuscripts from the Bodleian Libraries.” His autograph draft of his comprehensive legal code, or Mishneh Torah, dates back to around 1180. Its black Hebrew letters are written in a cursive Sephardic script, with many letters joined, as though the philosopher, rabbi, doctor and leading figure in the medieval Jewish world were writing in a hurry, without lifting the pen very often. He writes in straight lines and sometimes in the margins, occasionally crossing out. The sheets were found in the Cairo Genizah. An autograph manuscript of his “Commentary on the Mishnah,” written in Judeo-Arabic from 1167, includes his drawing of the plan of the Temple.

The more than 60 works showcased — many on display in the United States for the first time — span the third century through the 17th, and they include Bibles, commentaries on the Bible, prayer books for daily and festival use, a Hebrew psalter with French and Latin annotations, and collections of fables. Three volumes of Euclid’s “Elements of Geometry” — in Hebrew, Arabic and Latin — are set in a row, all open to the same diagrams. All the exhibited works are commentaries, too, on their times and hint of the hands that created, commissioned and used them.

The museum presents a brilliant solution to the difficulty inherent in displaying valuable manuscripts and books under glass: As is usual in exhibits of rare books, the individual volumes are propped open, with an often spectacular two-page spread visible. But the viewer is left wondering what might be on the following or previous pages, or the opening title page. Here, adjacent iPads are part of the exhibition. For several of the books on display, additional pages may be viewed by touching the screen, and images can be enlarged for more detailed views.

Claudia Nahson, Morris and Eva Feld Curator at The Jewish Museum, explains that the museum used touch screens before in exhibitions, but never iPads, and never has used the technology as extensively as it does in this show.

“Here, it was an interesting option — but not only for the technology and what it allows you to do. It’s another form of the book. We start with scrolls, rotulus [a scroll that unfurls vertically], codices. It’s all part of a history, how we transition from one to another,” she says, pleased to see all of the forms together in one space.

In fact, the very first sentence of the first panel in the first room nods to the new world and the consequences of change, noting how the eBook “has dramatically changed our world.” In light of how the physical form of a book is so speedily evolving, these manuscripts with their gold leaf, ornamented letters, stylized designs, masterful calligraphy and parchment pages speak to the timeless relationships between words and images.

An illustrated portolan map (marking coastlines and ports) of the Mediterranean and Black Seas highlights the names of the main sites of medieval Hebrew manuscript production, in Italy, Ashkenaz (Germany, England, parts of France) and Sepharad (Spain and Portugal) in Europe. The place names are written in fine, tiny calligraphy. The map was made in 1575 in Majorca, where most cartographers were Jews or conversos. Nahson points out that this sailor’s map represents the world as the cartographers knew it, and also the connections between geography and religion, with an image of the splitting of the Red Sea in one corner and the Virgin and Christ figures in another. Even secular art of the time, she says, was embedded with religious meaning.

Throughout the exhibition, books are placed in thoughtful juxtaposition with others, creating, as Nahson says, “books in conversation. Cultures are talking through the books, seeing those pairings and trios together, sometimes for the first time.”

The first three illuminated manuscripts in the specially designed wood and steel cases, are a Hebrew Bible from Spain, a mahzor, or holiday prayer book, from Germany, and a legal text from Italy, each typical of its medieval time and place. The Spanish Bible (c. 1257) is illustrated with Islamic-inspired images and design with an image of the castle symbol of Castile, referring to the Christian kingdom. In the volume from “Arba’ah Turim” (1438), the bucolic scene set against the Tuscan hills — by a Christian artist — includes an image of God in human form, very rare in a Hebrew manuscript.

The mahzor from Germany — from 1257, it is the earliest known and dated illustrated mahzor — is puzzling, as it’s open to a page with an illuminated panel featuring an upside-down hunting scene. Perhaps the Christian artist didn’t know Hebrew and was unaware of his placement, or perhaps it’s an allusion to Purim with its story of reversals, when the piyyut, or hymn is recited.

The colors on these pages are deep reds, blues and greens, and the gold still shines. They have not been overexposed to light over the centuries: These are works that look remarkably good for their age.

One of the most magnificent manuscripts here is the Kennicott Bible, made by a Jewish scribe and a Jewish artist in Corunna, Spain, in 1476. The book is open to pages that evoke Islamic imagery, and is set next to a 16th-century Koran from Iran open to an intricate design known as a carpet page, in still brilliant cobalt blue and gold. On a nearby wall, all 926 pages of the Kennicott Bible can be viewed digitally (and are also accessible on the museum’s website). The scribe, Moses ibn Zabara, had a steady, masterful hand — if one zooms in and enlarges the text, there are only the slightest variations between letters.

Nahson speaks passionately of the individual works of art, and also the wider story of Christians and Jews coming together over close readings of texts. She emphasizes a fertile literary and artistic exchange between people of different beliefs during the late middle ages.

The exhibition is based on an exhibit prepared for and exhibited at The Bodleian Library at Oxford University, which houses one of the most important collections of medieval Hebrew manuscripts in the world. Sir Thomas Bodley, a Christian Hebraist and humanist, reestablished the university library in 1598 (it had been ransacked) upon his retirement as ambassador under Queen Elizabeth. After his death in 1613, the library continued his tradition of Hebraic acquisitions. In the 1890s, 5,000 fragments from the Cairo Genizah were acquired; several of those are on display here.

The exhibition includes a miniature portrait of Sir Bodley that is inside an ivory case; it was painted the year he founded the library, and the tiny gold letters that indentify the year of its creation (1598) and the age of the subject (54) seem to reflect his interest in illuminated manuscripts. Nearby is another curious piece, “Queen Elizabeth’s Book of Oxford,” presented to the Queen in 1566 when she visited Oxford. A leafy Tree of Life is set above a poem in Latin about the importance of Hebrew learning, urging her to continue the financial support of the study of Hebrew Language, as her father, Henry VIII, had done. “Do you see how this tree flourishes when its roots are secure?” the poet writes.