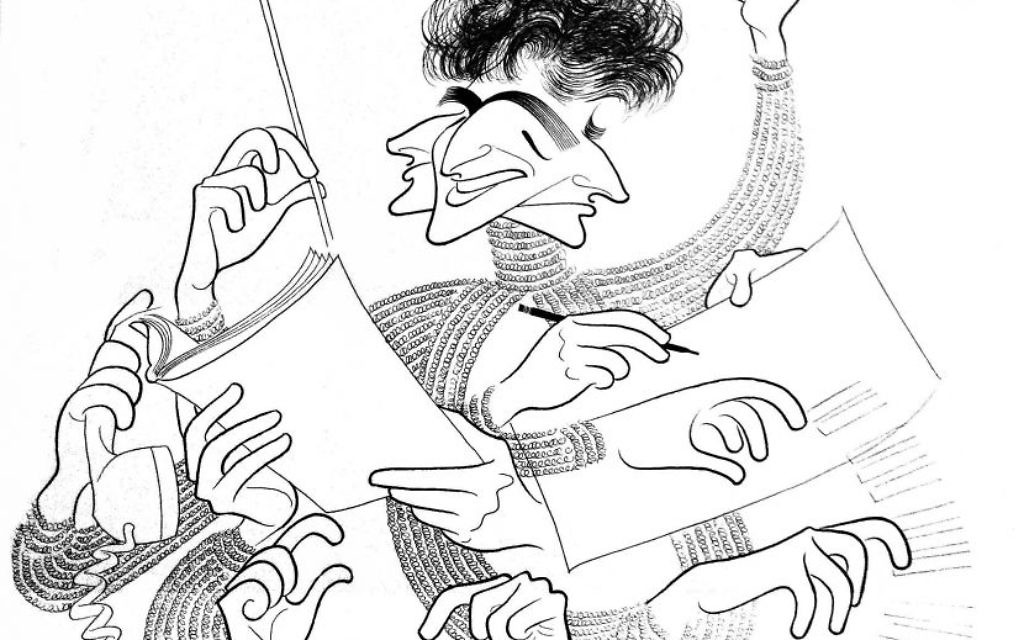 For over sixty years, readers of the Sunday New York Times bent over the first page of the Arts & Entertainment section, looking for the Ninas – the name of Al Hirschfeld’s daughter, which he worked into his drawings. The triumph in solving those simple puzzles was addictive; once you knew to look for them, you could never turn away. An exhibit of his drawings and many objects from his own collection,“The Line King’s Library,” is now on view at the Library for the Performing Arts in Lincoln Center.

I grew up searching, and so did Whoopi Goldberg, seen here in an interview. When she first met Hirschfeld, she told him that as a little girl, the Ninas had occasionally been too hard for her, though there were never enough. When Goldberg herself was Hirschfelded, there were 40 Ninas – and the artist asked her later if she’d found them all.

But the lesson I took from “The Line King’s Library” was that the Ninas are a bit of a distraction from Hirschfeld’s real achievement: an astonishing and consistently fulfilled gift for conveying likeness and motion turned to the service of the theater. The man didn’t waste a minute: while he had an exclusive agreement with The New York Times for much of his life, he also illustrated “Best Plays,” the annual collection of best American plays, for fifty years, collaborated on books and a disaster of a show with S.J. Perelman, published books of his own (original sketches for “Manhattan Oases: New York’s 1932 Speak-Easies” are here in a case), and over his career made lithographs and etchings, watercolors, oils and sculptures. Examples from most of these media are shown here, with pride of place given to the caricatures. Many of the prints are far larger than what we saw in the Times, and their subjects – Martha Graham, Leonard Bernstein, Ted Shawn, Vladimir Horowitz, Marcel Marceau, to mention only a few not from the theater or movies – are drawn from the entire world of entertainment.

Beyond graphic materials, what’s special here is the wealth of what’s known to librarians as realia, that is, objects from Hirschfeld’s archive, which is gradually being given to the NYPL: Balinese shadow puppets from the year he spent in Bali; letters from theater and movie stars; and, memorably, S.J. Perelman’s suitcase. If you’re looking for Judaica, you won’t find a bit – while Hirschfeld’s mother was famous for her Friday night dinners, his family was entirely secular. It would be too obvious, and indeed untrue, to say that the theater was his religion; it was his life. This exhibition wonderfully succeeds in giving a sense of that life and the work at its center. Oh, and if you want to remember childhood Sundays, there’s a Nina-counting game on an iPad at the end of the show.

“The Line King’s Library: Al Hirschfeld and The New York Public Library” is on view at the Library for the Performing Arts, Lincoln Center, until January 4, 2014.

Liz Denlinger is a curator at work on a novel about a boarding school in 1955.