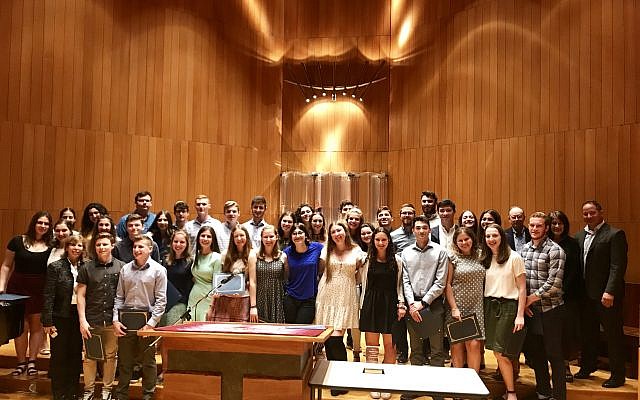 The graduates of the Write On For Israel 2019 program. Lily Weinberg/JW

Chloe Valdary, an African-American Christian woman in her mid-20s, says the most important lesson she has learned as a pro-Israel activist the last eight years is not to try to counter hate, but to promote love.

“The question is not how do we stop the hatred but how do we get people to start loving Israel,” she told the Write On For Israel class of 2019 at their graduation program Monday evening, held at Hebrew Union College-Institute of Religion.

The 44 high school seniors from 25 different local area schools – yeshivas, public schools and private schools – made up the 17th graduating class of the two-year program. It now has more than 700 alumni and is sponsored by The Jewish Week, with support from The Paul E. Singer Foundation.

The goal of the program, which includes an eight-day mission to Israel senior year, is to educate high school juniors and seniors about Israel and prepare them for the Mideast debate on campus, encouraging them to become active in defending the Jewish state.

Four recent graduates of the program were honored for their leadership activities on campus. They are Jacqueline Zenou, who graduated this week from Brandeis University; Yoni Nirenberg of Long Island University; Katie Glickman of Queens College and a Write On staff advisor; and Mitchell Klein of George Washington University.

Klein, who is director of outreach of a pro-Israel group at school, told the graduates that establishing personal relationships and knowing your audience are the keys to success. He said the Write On program taught and empowered him and it “will guide you on campus and off.” 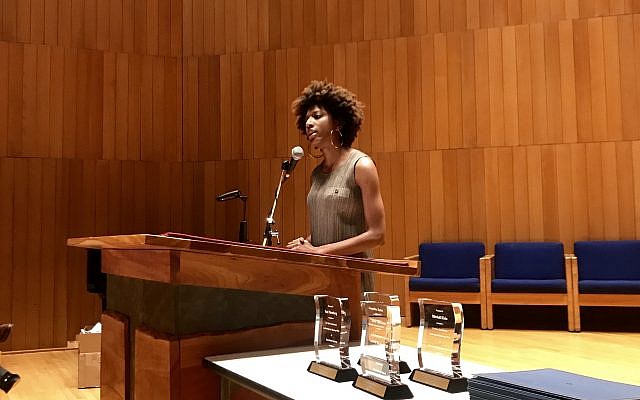 Chloe Valdary speaks at the Write On For Israel Graduation this week. Lily Weinberg/JW

Valdary, in her charge to the students, explained that her family was part of a small Christian sect that seeks to combine Old and New Testament practices. She grew up observing Shabbat, eating “kosher style” and fasting on Yom Kippur, starting at age 5. Along the way she said she “fell in love with Jewish culture” and Israel, and Leon Uris’s “Exodus” made a major impression on her. As a freshman at the University of New Orleans, she founded a group called Allies of Israel, and encountered numerous critics of the Jewish state. Her short, lively videos about her advocacy work for Israel have a large following.

“More important than the debate is being strategic,” she said. “When you are confronted with anti-Israel hostility, keep in mind that you and that person are human beings, and don’t let them stereotype you the way people do on the basis of color, gender, etc., all in the name of social justice.”

Though difficult to do, she encouraged the students to “approach people with compassion, and criticize to uplift and empower, not to put down.” She said the encounters can “uplift the people you are critical of and uplift you as well.” 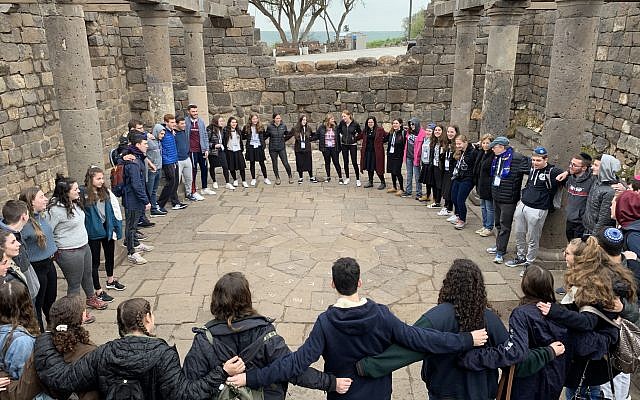 The Write On For Israel teens tour the Golan Heights during their trip to Israel earlier this year. Lily Weinberg/JW

Linda Scherzer, the founding director of Write On, praised the class, one of the program’s largest, for their enthusiasm and commitment. She noted that the importance of the program has grown as campus life has become more “toxic and complicated” in recent years, with an increase in anti-Semitism and the growth of BDS and other anti-Israel activities.

Jewish Week editor Gary Rosenblatt, a founder of the program, recalled his participation in the class mission to Israel in February. He said he benefited from the range of speakers during the trip “and I learned from each of you as I sought to experience Israel through your eyes.”

“Given the silos in our community, many of you would never have met each other if not for Write On,” he observed, and he urged the students to stay in touch with the Write On staff and with each other.

Tuvia Book, the program’s core educator and Israel tour guide, noted that early in the 20th century, only about one percent of Jews fleeing Russia came to and settled in Palestine. Many were teenagers and helped form the core of what became the Jewish state. “They had passion and knowledge and they took action,” he said, “and so do you,” encouraging the graduates to use their skills on campus.

Students entering their junior year of high school in the fall are invited to apply to Write On For Israel now. The deadline has been extended to May 31. www.WriteOnForIsrael.com/Apply