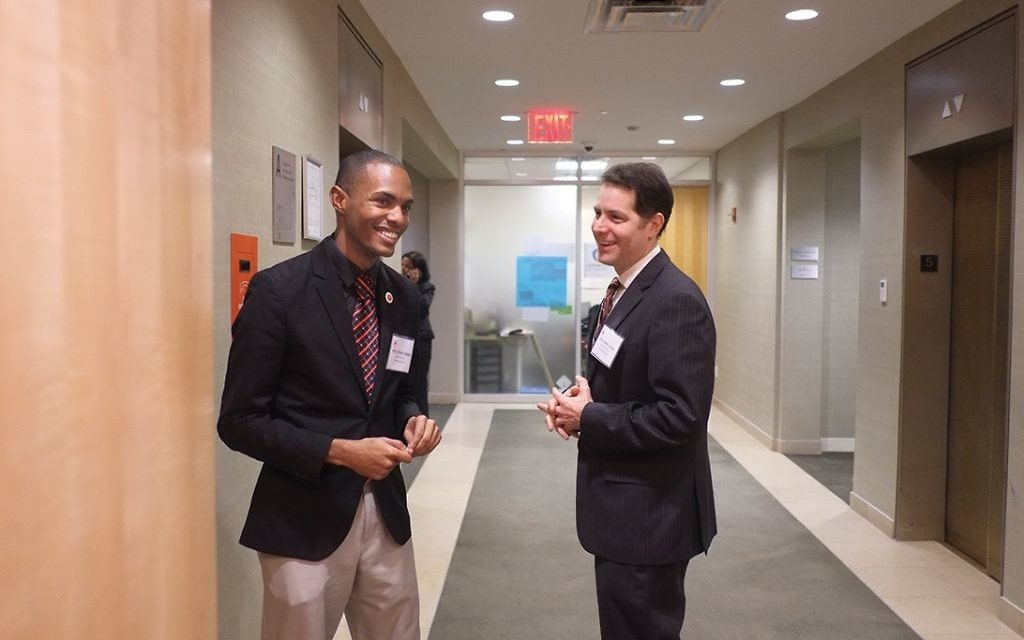 The City Council is considering a bill that would require the NYPD to include a hate crimes category in its weekly report on neighborhood crime statistics.

The hate crime category would include (but not be limited to) crimes motivated by hostility towards Jews, blacks, whites, Latinos, Asians, Muslims, people of any other ethnicity or religious group, members of the LGBT community and people with disabilities.

Currently the weekly crime statistics, known as “CompStat reports,” include 14 categories — both felonies, such as murder, rape and robbery and misdemeanors, like shoplifting and disorderly conduct.

Councilman Mark Levine, chair of the Council’s Jewish Caucus, introduced the bill last week with Public Safety Committee Chair Vanessa Gibson, who is black; Queens Councilman I. Daneek Miller, who is Muslim and black and Bronx Councilman Ritchie Torres, who is gay, black and Latino.

“We’re already collecting the data on hate crimes,” Levine told The Jewish Week. But currently the NYPD only distributes the data once a year, which Levine said isn’t nearly enough.

“More than any other class of crime, hate crimes often spike due to current events,” he said. “For policy makers and the general public to understand those trends, we need data much more often than once a year.”

However, at a hearing on the bill Friday, an NYPD official said that police can only provide hate-crime data “off-line and upon request,” according to Politico New York. The NYPD did not respond to requests for comment from The Jewish Week.

The bill comes amid a spike in hate crimes against Jewish, Muslim and LGBT community members, including vandalism of an Orthodox synagogue on the Lower East Side and a violent attack on an Orthodox man in Williamsburg last week.

On Wednesday, the rabbi of the Stanton Street Shul discovered prayer shawls, papers and knickknacks strewn across the sanctuary and two lamps broken. Nothing was stolen and the Torahs and the ark were untouched, according to a letter from the synagogue’s president quoted in The Jewish Press. Two days later, someone hit an Orthodox man in the back of the head in front of a yeshiva, causing “significant injury,” according to the Anti-Defamation League.

According to ADL, in 2014 anti-Semitic incidents (both criminal and non-criminal) in New York State rose by 14 percent, with 55 in Brooklyn, 54 in Manhattan, 38 in Suffolk, 26 in Nassau, 20 in and around Westchester and Rockland, 18 in Queens, 14 on Staten Island and six in the Bronx.

In the first five months of 2015 anti-Semitic incidents rose by 29 percent over the same period a year ago and anti-Muslim crimes rose from two to seven, according to Levine.

Other recent hate crimes against Jews include:

♦ a man declaring he’s “a Nazi bastard” and punching a Jewish teenager in the face in Midwood;

♦ a Staten Island teenager caught writing “Death for Jewish religion” in Arabic on a school poster;

♦ and swastika graffiti in Borough Park and hateful messages including “Hitler is alive and well” written outside a yeshiva in Kensington, according to the New York Post.

Recent hate crimes against other groups include:

♦ an attack by three Hispanic gang members who punched and yelled racial slurs at a black man as they tried to steal his scooter in Flatbush on Oct. 11;

♦ an attack on a woman eating dinner with her mother in a Korean restaurant in Midtown in September by an assailant who thought she was a lesbian and dragged her across the floor and then threw her “across the room”;

♦ a transgender woman was threatened with death outside her home by a group of men in Crown Heights in July;

♦ an attack on a gay man in Crown Heights by six people, one of whom smashed his face with a rock and spit on him in July;

♦ a man shoving a transgender woman onto the subway tracks at the Bleecker Street station in Manhattan in June;

♦ four attacks on Asian women who were hit in their faces with a plastic-wrapped hard object on the East Side of Manhattan in June;

♦ and an attack on a gay couple who were hit with a chair in a Chelsea restaurant in May.

Last week, an incident in which a man threw a Molotov cocktail at a Midtown street corner where a pair of Lubavitch students were doing outreach, was initially investigated as a hate crime, but after arresting a suspect, police have determined that the man wasn’t aiming at the students but at someone else standing near them.

“Unfortunately, in this day and age there is no shortage of hate crimes and recent high profile incidents have impacted all communities,” Councilman I. Daneek Miller said in a statement. “The hate crimes reporting bill will allow us to gather data and effectively use our resources to address specific issues of hate throughout the city.”