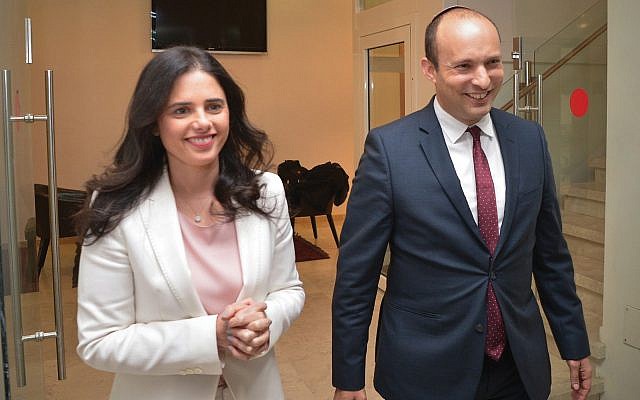 Israeli Minister of Education Nafatli Bennett and Justice Minister Ayelet Shaked after their announcement Sunday in Tel Aviv that they will form a new Orthodox-secular right-wing party. Yossi Zeliger/Flash90

Jerusalem — A new right-wing political party will be vying for voters in Israel’s April 9 national election, and could draw votes away from other right-wing parties, including Prime Minister Netanyahu’s Likud party.

Education Minister Naftali Bennett and Justice Minister Ayelet Shaked, formerly the leaders of the religious right-wing Jewish Home Party, have formed a new breakaway party, called the “New Right.” They are billing it as a big tent where religious, secular and other right-wingers will all be welcome.

In a poll this week by Walla News, the New Right received 10 Knesset seats to Likud’s 28; Likud garnered fewer seats in the Walla poll than in surveys prior to the new party’s creation. Another poll, by the Makor Rishon newspaper, gave the New Right 14 seats, and the Likud 25.

Unlike the U.S., where just two parties dominate, Israel’s 120-seat Knesset consists of many factions, which cater to every conceivable sector of the public. Some join the governing coalition while the rest sit in the opposition.

The announcement by Shaked and Bennett caught even some of their closest associates by surprise. For several years now, the left and center have been the ones to form new parties, in a bid to create a more moderate government willing to hand over territory to the Palestinians, increase the social safety net for poor families and end military exemptions for ultra-Orthodox yeshiva students.

What’s different now, pundits say, is that Netanyahu may finally be politically vulnerable, not least because the attorney general is weighing whether to indict him for corruption. Arguably more pressing in his constituents’ eyes has been Netanyahu’s failure to stop Hamas from launching rockets into Israel and his inability to prevent terror attacks in the West Bank.

The security situation has deteriorated to the point that State Department just issued a heightened travel warning to U.S. citizens: “Terrorist groups and lone-wolf terrorists continue plotting possible attacks in Israel, the West Bank, and Gaza. Terrorists may attack with little or no warning, targeting tourist locations, transportation hubs, markets/shopping malls, and local government facilities. Violence can occur in Jerusalem and the West Bank without warning.”

“Bennett and Shaked are going after Netanyahu, and they have real policy differences with him on security matters,” said Neri Zilber, a political analyst and adjunct fellow of the Washington Institute for Near East Policy. “He hasn’t stopped Hamas from being paid $15 million a month or sending incendiary kites and balloons” into Israeli border communities “or recent terror attacks. They’ve brought up the Gilad Shalit deal,” in which Israel traded Shalit, an IDF soldier held captive by Hamas, for 1,000 imprisoned Palestinians, including convicted terrorists.

Bennett and Shaked are billing the party as a more right-wing alternative to the Likud, Zilber said, but left of the Jewish Home.

Even after the first polls showed that the new party will likely siphon votes away from Likud and the Jewish Home, Zilber thinks it’s too early to predict whether there are enough voters among moderate, less-religious settlers, for example, to sustain the party.

“The Jewish Home has a substantial base of supporters — a big part of the Religious Zionist settler movement. Are there enough disaffected Likud voters who will flock to them, who are not willing to vote for Netanyahu for whatever reason? It’s still unclear who their real base will be,” Zilber said.

Lahav Hartov, the Jerusalem Post’s Knesset reporter, said Bennett decided to form a new party because he aspires to be prime minister one day.

“This decision was a long time coming. He needs to be more than the education minister for people to take him seriously for prime minister. He wants to demand something better” in the next government, and use it as stepping stone.

Hartov said that when Bennett joined the Jewish Home it was a decades-old national religious party once called Mafdal.

“The party never had real leadership ambitions,” Hartov said. “It stood behind whoever was the right-wing prime minister.”

While the emergence of the New Right may not change the number of votes cast for right-wing parties, it could push some veteran parties below the percentage of votes needed to remain in the Knesset.

“I think there is a danger of parties like Shas and the Yisrael Beiteinu and the Jewish Home, which aren’t polling well, to find themselves below the threshold,” Hartov said, referring to the requirement that a party must receive at least 3.25 percent of the votes to sit in the Knesset.

The Likud is reportedly trying to raise that threshold to ensure that other right-wing parties stay in the Knesset.

It might sound counterintuitive for Likud to want other parties to reach the threshold, but without these parties the Likud might not be able to form a coalition government, Hartov noted.

Anshel Pfeffer, author of “Bibi: The Turbulent Life and Times of Benjamin Netanyahu,” said Bennett and Shaked’s defection from the Jewish Home was a calculated maneuver intended to pave the way for their eventual move to the Likud.

“They’re trying to create a platform to enter the Likud once Bibi is gone.” Pfeffer said, referring to the fact that Bennett and Shaked worked for Netanyahu several years ago, when he served as the head of the opposition in the Knesset.

“Bibi doesn’t like them personally, so they would need to make the move when he is no longer there.”

Regardless of what happens in the future, in the here and now “the emergence of a new right-wing party that isn’t overly religious and that combines religious and secular — and isn’t just a vehicle for Benjamin Netanyahu is a threat to the Likud,” Pfeffer said. “There are [Likud] people who aren’t hugely happy with Bibi and are searching for an alternative.”

If the polls are correct and the New Right scores several Knesset seats, Bennett and Shaked would have considerable clout and bargaining power.

“They have their own party now and they’re not beholden to people within their old party. These are interesting days,” Pfeffer said.