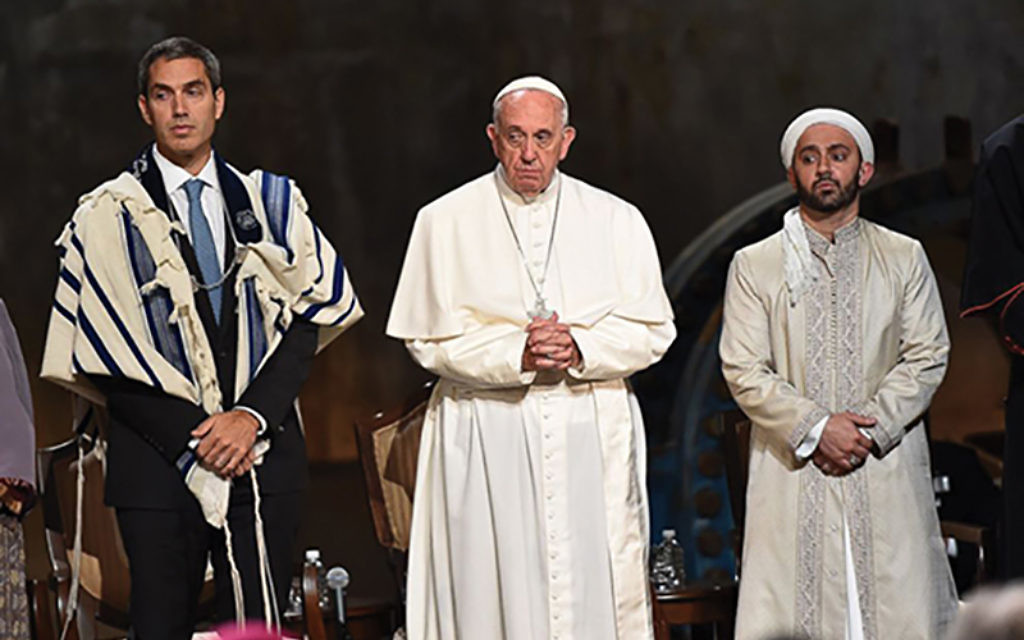 The following year, Rabbi Mordecai Waxman of Great Neck, L.I., speaking on behalf of organized American Jewry, delivered a passionate speech to the pope about the Christian roots of anti-Semitism.

In 2008, Rabbi Arthur Schneier welcomed Pope Benedict XVI to his Park East Synagogue, the first papal visit to a synagogue in the United States.

Last Friday, it was Rabbi Elliot Cosgrove of Park Avenue Synagogue, a Conservative congregation, who sat next to Pope Francis and delivered an invocation during the interfaith service at the 9/11 Memorial Museum.

“Over the years there have been several Jewish leaders who have met with the head of the Vatican,” observed Rabbi Joseph Potasnik, executive vice president of the New York Board of Rabbis. “The ecumenical circle just got larger.”

It was New York Cardinal Timothy Dolan who selected Rabbi Cosgrove for the honor.

“I have a warm relationship with Cardinal Dolan personally, institutionally and inter-religiously,” Rabbi Cosgrove told The Jewish Week. “When he first arrived in the city as archbishop [in 2009], the Jewish community welcomed him at our synagogue. When he was elevated to cardinal, I was honored as the interfaith rabbinic adviser for the ADL to represent the Jewish community in Rome.”

And when last November Cardinal Dolan wished to express solidarity with the Jewish community following the Palestinian terrorist assault on a Jerusalem synagogue that killed five during morning prayers, he went to Rabbi Cosgrove’s synagogue.

“We have been able to work in common cause over the years,” Rabbi Cosgrove said. “And so it was quite an honor to be chosen when they needed a Jewish representative for the inter-religious gathering.” (Park Avenue Synagogue’s cantor, Azi Schwartz, offered a memorial prayer and sang “Oseh Shalom.”)

Rabbi Cosgrove pointed out that although he has not changed Church doctrine, Pope Francis has “changed the tone” in the Catholic Church in a fashion that is “worthy of consideration and in many cases emulation for all contemporary religious leaders. He insists on religion speaking to those most in need in society, that religion speak to the issues of the day — and he has led with an ethic of inclusion and not exclusion.”

In his sermon the next day, Rabbi Cosgrove called Pope Francis “the most exciting religious leader of our time.”

“His words and actions remind us that the point of religion is not descriptive, to describe the world as it is; rather it is prescriptive, to describe the world as it ought to be,” he said. “To the great credit of Pope Francis, he has shifted the conversation away from who is out to who is in; away from what behaviors will preclude you from the services of the Church to how the services of the Church must be better deployed to serve those at the periphery of society. It is not hard, not hard at all, to think of pockets of Jewish religious leadership who would do well to adopt Pope Francis’ posture.”

On a personal note, Rabbi Cosgrove told his congregations that following the service, his mother, Gay, spent the next 24 hours speaking “to everyone from the kosher butcher to the attendant at the dry cleaners about her son and the pope. For a glorious and fleeting moment, all my failings as a son have given way to a tsunami of kvelling ….”

And during the service, he said his older brother, Daniel, a urologist, texted their family: “See that rabbi standing there next to the pope? His brother … he’s a doctor.”