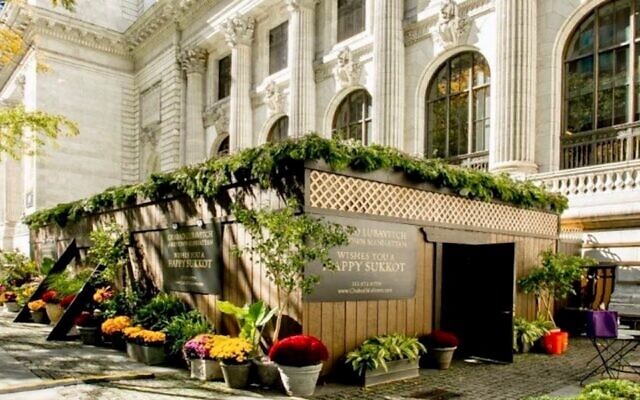 Good morning, New York, and gut yontiff: Sukkot starts tonight at sundown. Get a primer on the harvest holiday from our friends at My Jewish Learning, and send us pics of your sukkah or an interesting one in your neighborhood — we’d love to include it in an upcoming feature.

The Jewish Week/Daily is taking a break for the two-day holiday. See you on Thursday.

IN REMISSION: Lee Zeldin, the Long Island Jewish Republican congressman who is running for New York governor, announced he is in remission from leukemia but will continue his campaign. (JTA)

GRAFFITI ATTACK: Gov. Kathy Hochul said she was “sickened” by anti-Semitic graffiti spray-painted along the FDR Drive at E. 125th St. on the first night of Yom Kippur, and directed the State Police Hate Crimes Task Force to assist the NYPD investigation. (The Village Sun)

HIGHER ED: Yeshiva University is 68th in the 2022 U.S. News & World Report Best National University Rankings released this week – rising from No. 76 in 2021 and moving up 29 spots in the last two years.

Binyamin Lehrfield took over as the new rabbi of The Riverdale Minyan, a six-year-old congregation in the Bronx. (Riverdale Press)

Twenty years ago, the UN held a conference in Durban, South Africa that became a forum to attack and vilify Israel. Join American Jewish Committee for a program remembering the conference and its enduring legacy, with Gilad Erdan, ambassador of Israel to the United States and the United Nations; Joëlle Fiss, author of “The Durban Diaries: What Really Happened at the UN Conference Against Racism in Durban”; Felice Gaer, AJC director, Jacob Blaustein Institute for the Advancement of Human Rights, and Simone Rodan-Benzaquen, AJC Europe managing director. Register here. Noon.